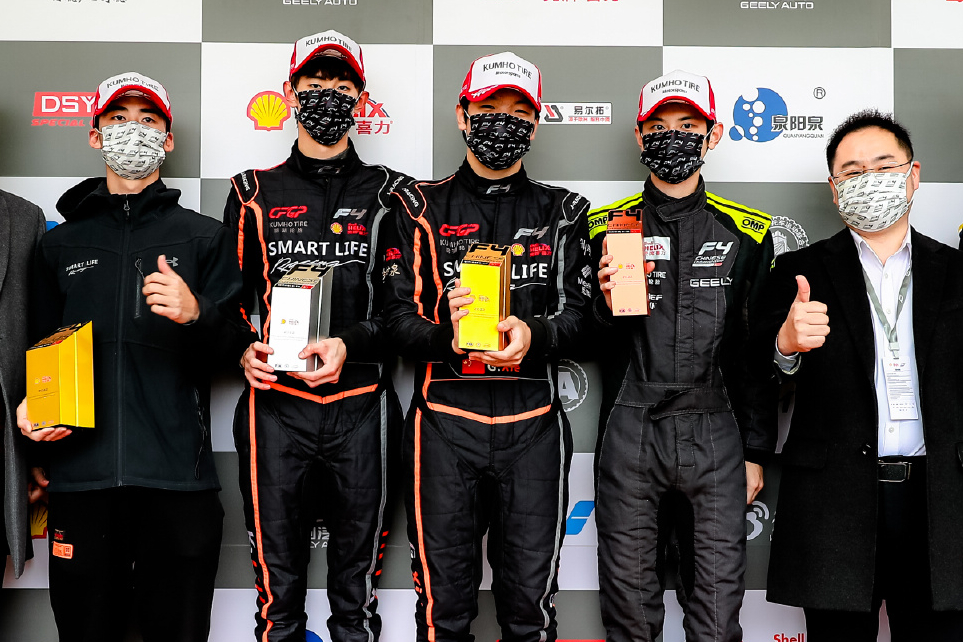 The Smart Life Racing driver claimed pole for race one of the twice postponed event by 1.441 seconds, then proceeded to win the 15-lap encounter by 23.343s over Jing Zefeng.

On lap one, Zefeng ran alongside Xie around the outside of the two right-handers that start the lap, meaning he was on the inside for the direction change of turn three. He moved ahead of Xie, only for him to dive down his inside a few corners to reclaim first place. Jingxi Lu trailed behind in third.

The gaps between the top three had widened significantly by the race’s halfway point, with fifth place over 20s off the battle for third place.

Lu was passed by team-mate Kaishun Liu for third on lap nine, and he then closed down the four-second gap to Zefeng. It took him four laps to get on Zegeng’s gearbox, then he passed him on the pit straight with two laps to go. Zefeng got back by later around the lap, and finished 0.388s ahead.

Shang Zongyi, who last raced in Chinese F4 in 2019, pulled off before reaching the grid but was able to compete in the race before retiring.

Pan Yanqing and Maximiliano Manhao shared the front row, with Lu Sixiang third but leading the field through the first formation lap. He then stopped to make a practice start on the grid, dropping to the back before then taking up third on the grid.

Yanqing made a strong start while Manhao floundered, and Sixiang was second before turn one. He locked up, while Zefeng tried going down the inside of Lu. Manhao was on the outside and the trio collided. Zefeng rode over the top of Lu, then they struck Sixiang as they exited the corner.

The race was red flagged, then restarted behind the safety car for one lap. Yanqing raced away once green flags were waved, with Xie already his closest rival by the end of the lap.

Xie took the lead on lap three and didn’t look back, winning by 20.216s after eight laps.

Also making progress was Liu, who demoted Manhao to fourth with a move on lap four. Pang Changyuan followed through at the last corner after a brief three-wide moment.

Manhao dropped further down the order before retiring with a lap remaining, while Liu pressured Yanqing until the latter spun off the turn one kerbs, bringing Liu up to second.

Zefeng – who switched to a new car – started fifth and left a big gap ahead on the formation lap so less time was spent idle on the grid. It worked as he ended the opening lap in third, and pulled off a great move on Liu down the inside of turn two on lap six to snatch second place.

He was defending thereon, with Liu threatening to pass at the end of lap 11 and again at the start of lap 12. Later around the lap he did the dummy and made it work, but then cut across Zefeng who went straight back past.

Liu’s next attempt at turn one instead allowed Lu through, but on the final lap he reclaimed third, and took second from Zefeng a few corners from the end. Manhao resisted Yang Shengwei race-long for fifth.

Yanqing had reversed-grid pole again for race four, and led by 3.66s after one lap. However Xie and Zefeng were ahead by lap three, and he finished a distant fifth. Xie made it 12 wins out of 14 for the season, beating Zefeng by 24.293s.