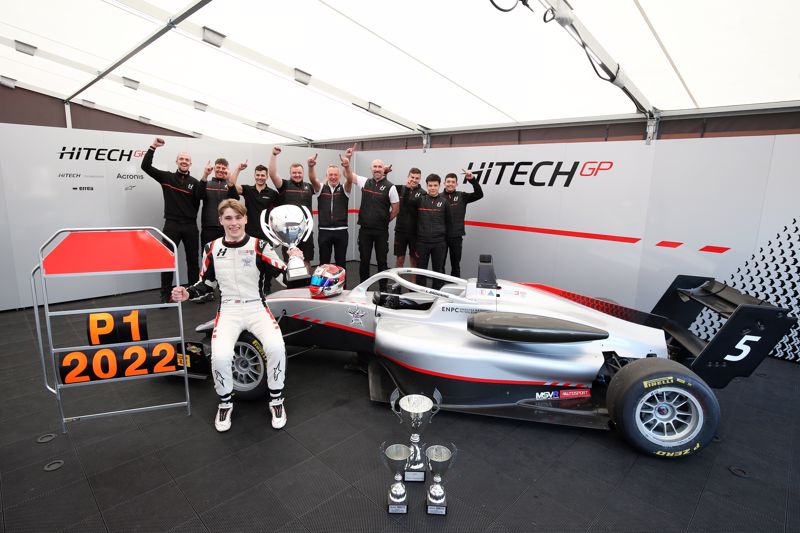 Browning delivered on his pre-season favourite tag to win the title, but was pushed all the way by Granfors

The duel for the 2022 GB3 crown was one of many positives for the series in it’s first full season since being rebranded from BRDC British Formula 3 to GB3 halfway through 2021. A new halo-shod Tatuus MSV-022 chassis produced more performance, close racing, and strong grids.

Expectations were high for 2020 British Formula 4 champion Luke Browning after signing for Hitech GP for his first full GB3 campaign, having won on his series debut with Fortec Motorsports in 2021.

A 21-car field lined up on the grid for the Easter weekend season-opener at Oulton Park, and Browning made an ominous start by dominating the first two races from pole by sizeable margins on his local circuit ahead of Carlin’s Roberto Faria. But his weekend ended on a bit of a dampener after being taken out in the reversed-grid race.

“It was out of my hands that one,” said Browning after the third contest. “But, coming away with two wins is a positive. We’re leading the championship, obviously less than I’d like it to be, but it is what it is.”

Despite finishing a distant third and fifth for Fortec in the first two races, Granfors’ qualifying pace –  only 0.041 seconds shy of Browning – was an early hint that the title fight was not going to be a one-horse race.

“F4 didn’t really suit my driving style, because you have to do a lot of sliding, and I really don’t like that,“ Granfors revealed at Oulton. “But, now in GB3, there’s a lot more downforce, a lot more grip, it suits me a lot better. 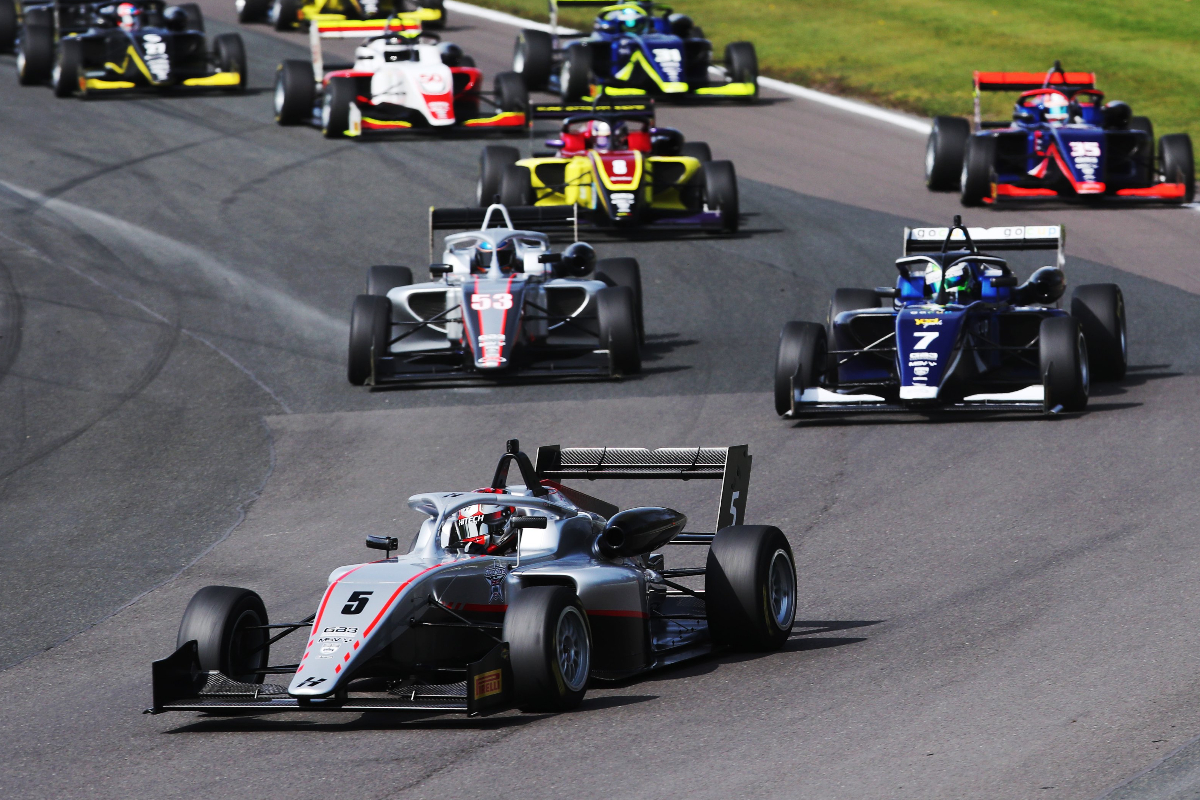 Granfors delivered on that potential at the next round at Silverstone by securing a double pole, converting the first of those into a maiden victory ahead of Browning. The pair were beaten in race two by Elite Motorsport’s Tom Lebbon, who took full advantage of a lower downforce set-up to claim the lead exiting Copse and then go on to take his maiden series win, while Granfors again edged Browning for second. There was more reversed-grid race frustration for Browning, with damage sustained on the opening lap holding him back, allowing Granfors to move to the top of the standings by three points.

The grid grew to 22 cars at Donington Park – a series record – and the first race of the weekend started with one of the most dramatic moments of the season as the championship’s top two both retired on the opening lap. A clash for the lead with JHR Developments’ Matthew Rees resulted in Granfors spearing across the track into the path of Browning, who crashed out spectacularly after swerving in avoidance onto the grass and then becoming airborne.

Carlin’s Callum Voisin was the beneficiary of the melee, taking his first win ahead of Faria in just his third race weekend in single-seaters after making the step up from Ginetta Junior.

Having scored a pair of fourth place finishes at the previous round, Max Esterson took his first series podium in third for Douglas Motorsport. The Formula Ford 1600 graduate went even better in race two, taking his first and what would prove his sole victory of the season from pole. Browning beat Granfors to second to regain the points lead, but it was the latter that ended the weekend in front thanks to a stronger race three as Browning once again sustained minor car damage.

“It’s out of my control,” said Browning on the early-season incidents. “But, this bad luck will end, I’m sure. One point behind, so thankfully with all this bad luck we’re still there.”

He regained the initiative at Snetterton by passing Granfors at the start of race one and then finishing second, while Voisin took his second victory, and Browning again came out on top in a fiesty battle with his title rival to win race two. 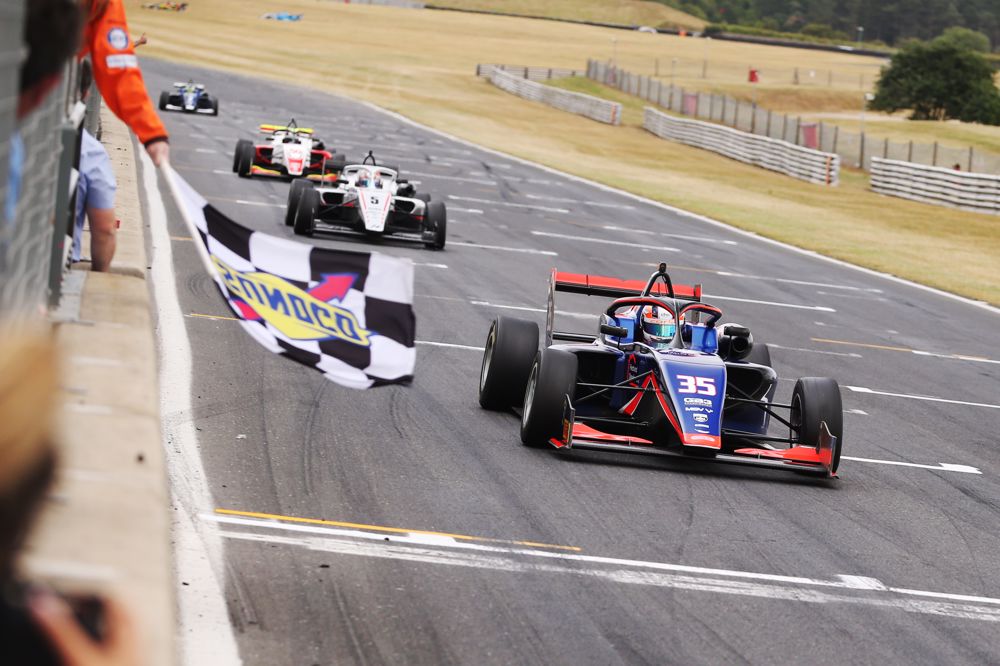 The momentum continued to go Browning’s way at Spa-Francorchamps, where he delivered his most emphatic weekend of the year, qualifying on pole for the first two races by half a second. He lost the lead on the opening lap of both encounters on the long run up to Les Combes, but he was still able to regain the ascendancy both times and take a comfortable brace of victories ahead of Granfors.

“Spa was just special,” Browning reflected. “There’s so much a driver can do, but the car at that round was absolutely phenomenal. You’ve really got to hail Hitech for the car they gave me around there. As long as I put a reasonable lap together I was still three or fourth tenths quicker than everyone. When I had that sort of gap on people, it felt pretty special.”

When Browning topped qualifying a week later at Silverstone, it was starting to look like his title to lose. But things took a dramatic turn before racing commenced when all three of Hitech’s cars failed scrutineering resulting in Browning – and team-mates Bryce Aron and Cian Shields – being excluded from qualifying and sent to the back of the grid for all three races.

After a parts shortage from supplier Tatuus earlier in the year, the team had run without a metal skid block on the front of its cars throughout the season, with other teams believed to have suffered from similar shortages. But with the part now available, officials deemed the cars as not compliant with the regulations.

The parts were fitted and the cars re-scrutineered, and Browning put up an admirable performance in all three races from near the back of the field to salvage as many points as he could, but he still left the weekend far from happy with events.

Granfors took full advantage of his rival’s misfortune to take his second win of the campaign in race one and podium finishes in the other two encounters, his drive from 18th to third in the reversed-grid race one of the performances of the year.

Lebbon was declared the winner of an eventful race two. After finishing first on the road with a puncture following a final-lap clash with Voisin, he was excluded for a yellow flag infringement, but the penalty was downgraded on an appeal to a grid penalty for the next round. 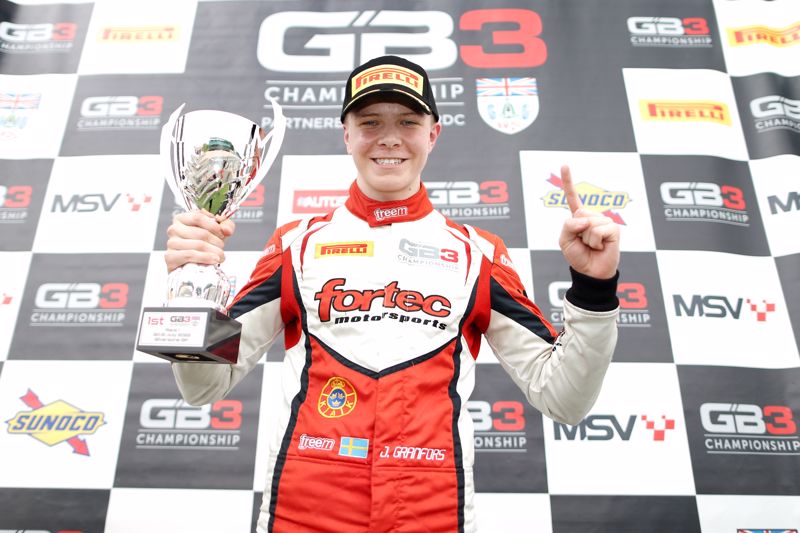 “The car definitely suits the track, I think I suit the track, the combination works well,” said Lebbon after taking his second Silverstone triumph of the year. “We are getting stronger at other tracks, fine tuning the setup and my driving as well.”

Coming into the penultimate round at Brands Hatch 29 points adrift of Granfors, Browning had it all to do. But he delivered in style. Starting behind Granfors for races one and two, Browning passed his rival on the opening lap of both encounters to eradicate the deficit, but the pair were put in the shade by Rees and Lebbon who took a win apiece. Rees’ win was his and JHR’s first since making the step up from their title-winning British F4 campaign in 2021.

“I think it’s quite good, it’s quite a relief for Steve [Hunter, team principal] because he and I have been through a lot this year,” said Rees. “[The performance] is there, it’s the person pedalling it, I just needed to wake up a bit myself and obviously we have just gone and won a race. The car has not been bad, we just needed to utilise it a bit more.”

Browning went into the final race of the weekend with a half-point lead, and that advantage grew after Granfors damaged his front wing and failed to score.

That gave Browning a crucial 15.5-point advantage heading into the Donington finale, where the two rivals both had a difficult qualifying. Granfors lined up three places behind Browning in eighth for race one. Browning recovered to finish second behind Voisin, as Granfors could only manage fifth.

The title was secured with a race to spare in a challenging second encounter. With most of the field starting on grooved tyres on a damp but drying track, Browning managed his tyres to perfection to take another second place behind Lebbon, who notched up his fourth and arguably most impressive victory. Needing to finish within one position of Browning to keep his hopes alive, Granfors burnt up his tyres and tumbled to 13th.

“It’s been pretty special,” said Browning after sealing the title. “The consistency in the races has been insane, I don’t think I’ve made a mistake this year, truly, in the races. 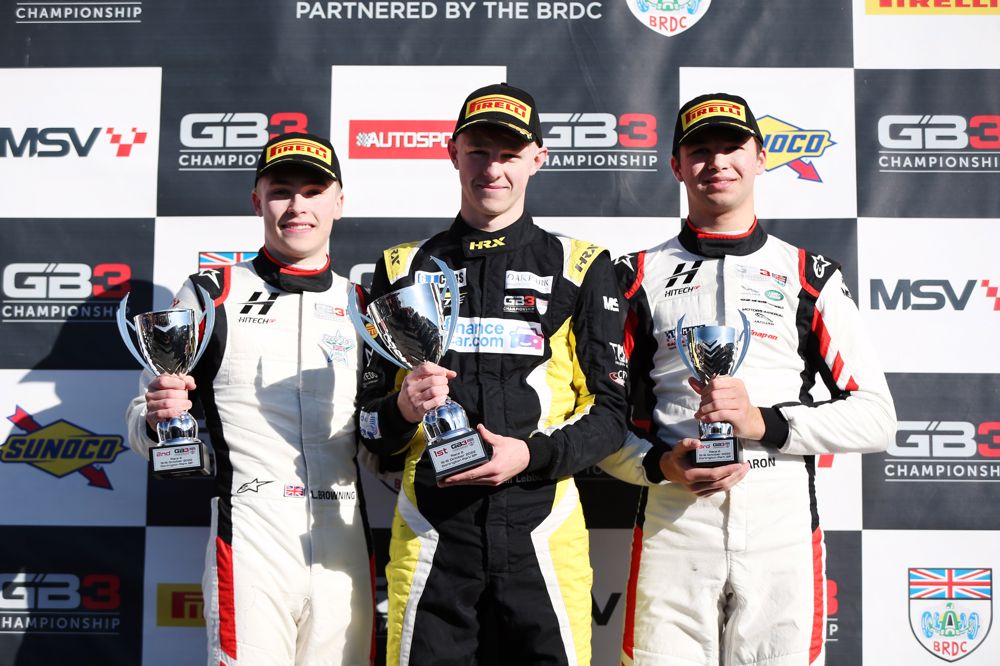 “A few mistakes in qualifying here and there, where we should have been further up than we were. But racing, we’ve had a flawless year, really.”

“I think it’s been a good season,” said Granfors after missing out on the crown. “It’s been very close between me and Luke all year, it’s always been us two.”

It became a double celebration for Hitech, who beat Carlin to the teams’ title in the deciding race. Meanwhile Voisin was pipped to third in the standings by Lebbon, but he tied with Browning for most pole positions across the year – winning the Jack Cavill Cup in the process – and finished as top Carlin driver against his sophomore team-mates.

After his early-season win, Esterson added another podium finish at Spa but sufferered a dip in form at the final three rounds and slipped to seventh in the standings. A switch to Fortec for a second GB3 assault in 2023 could put the American in a position to fight for more wins and the title.

John Bennett was another rookie to catch the eye, showing consistent top-10 form throughout the year for Elite after stepping up with the team from the Ginetta GT5 Challenge, and he was finally rewarded with his first podium at the final round. He will switch to Carlin for his sophomore GB3 campaign, and will also be aiming to challenge for the title. 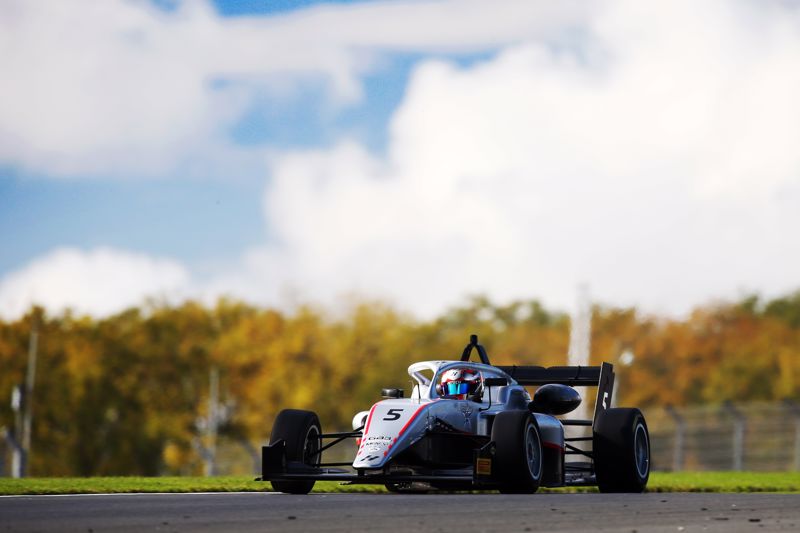 Following his triumph, Browning went on to win the Aston Martin Autosport BRDC Award – the second GB3 champion in a row to win the prestigious prize – and his prize includes a test in an Aston Martin Formula 1 car. He will also take part in an FIA F3 test as a prize for winning the GB3 crown.

“Ultimately, the thing that’s most important about the championship is that our champions go on to do great things,” said Jonathan Palmer, CEO of GB3 promoter MotorSport Vision.

“And they will only do that if the fact they’ve won, the success they’ve had, is because the platform we provide really does give the best drivers the opportunity of showing it. If it was not particularly equal, if more money could buy more success that would compromise the ability of the championship to highlight the best talent. But, because I think we do a good job on that, the best talent does go and acquits itself very well in F3 and Formula 2.”