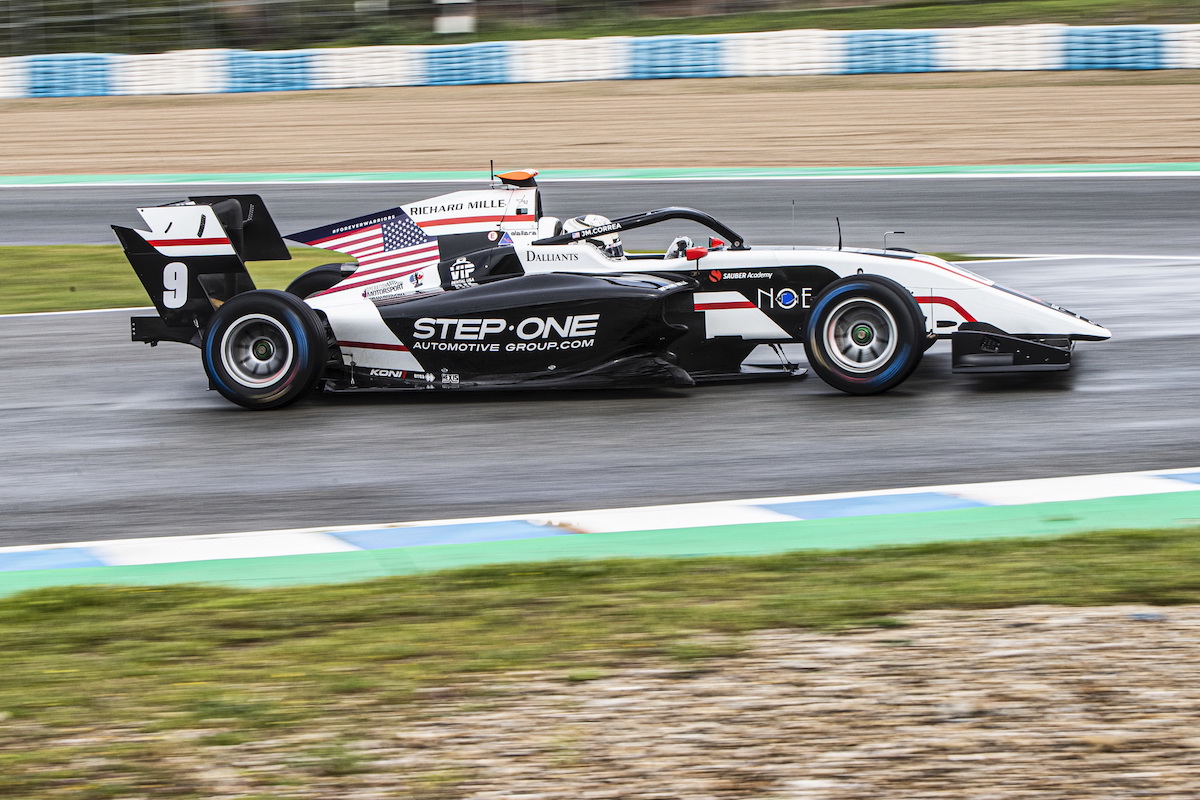 A metatarsal fracture on his left foot has forced Juan Manuel Correa to pull out of next week’s FIA Formula 3 test at Barcelona, with his participation in the Imola races “at risk”.

Correa was in an enormous amount of pain throughout the two-day F3 test at Jerez earlier this week, even being forced to cut short his running on the second day as the pain became unbearable.

Speaking to Formula Scout at the circuit, he said: “I couldn’t drive too much unfortunately because I have still a bit of an issue with the leg from the race in Bahrain. In the last race of the weekend, I got some inflammation in the tendons in the left foot and it still hasn’t recovered so I’m in quite a bit of pain when I drive.”

His ability to brake was unsurprisingly significantly impaired, particularly in the dry conditions of the test’s second day when he could only manage a total of 47 laps, stopping by the track in the closing minutes of the afternoon session.

“I was actually lucky that it rained all day yesterday because it’s softer on the brake,” he commented.

Speaking during the test, he remained cautiously optimistic: “Ever since Bahrain, we’ve been working mainly on trying to reduce that but it’s still not perfect.

“The whole left foot has a lot of inflammation. And the nerves have gotten inflammated.”

However, in a video message posted on social media on Friday he said: “We did an MRI scan yesterday night, got the results today and there is indeed a stress fracture there.

“The doctors have recommended a couple of weeks of rest. Let’s see how it heals itself, how the pain improves,” adding that, “we’re going to try to push the recovery to be able to do the Imola race but nothing is guaranteed.”

Entering his second season in F3 with ART Grand Prix after his comeback from injuries sustained while racing Formula 2 at Spa in 2019, Correa qualified and finished in fourth position in the feature race in Bahrain despite the pain he was in.

“Everything at the end goes back to that [the Spa crash] and both to my physical limitations, especially the ones I had last year, and that I’m having now which I was not expecting to have this year. It is a very frustrating to be in that position right now,” he explained in Jerez.

After the Barcelona test, Correa was due to make his European Le Mans Series debut at Paul Ricard next weekend for Prema’s new LMP2 team alongside Louis Deletraz and Ferdinand Habsburg, which he will also have to miss.

He thanked both teams and vowed “to take it as it comes and make the best out of it as I always do.”