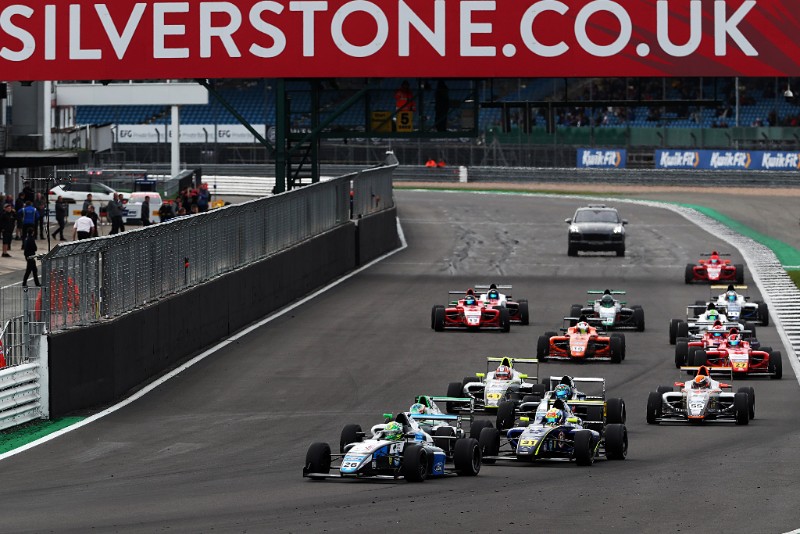 Foster led from start to finish to take his second consecutive victory. He put in multiple fastest laps in the opening stages of the race to build a gap of almost four seconds to team-mate Sebastian Alvarez, but slowed to conserve his tyres later on.

Alvarez was able to close the gap to 1.313 seconds, and brings him just seven points off championship leader Zane Maloney.

Carlin’s Maloney suffered a lock-up while battling with title rival Josh Skelton on the opening lap and dropped back to sixth. He then lost time trying to pass Arden’s Alex Connor but was eventually able to take fifth midway through the race.

He managed to close the gap to Carter Williams for fourth, keeping the pressure on the JHR Developments driver and forcing Williams to push on and catch team-mate Skelton.

They made it a three-way battle for the final podium position in the final laps, with Williams almost able to get alongside Skelton on the final lap, but Skelton held on to take his ninth consecutive podium finish. Maloney finished fifth behind them.

Connor led a three-way battle for sixth over Fortec Motorsports’ resurgent Mariano Martinez and Richardson Racing’s Luke Browning, who had started from last on the grid.

Roberto Faria (Fortec) and Abbie Munro (Arden) completed the top 10. Championship debutant Christopher Lulham finished 10th on track for Fortec, but was demoted a place by a penalty for a false start.