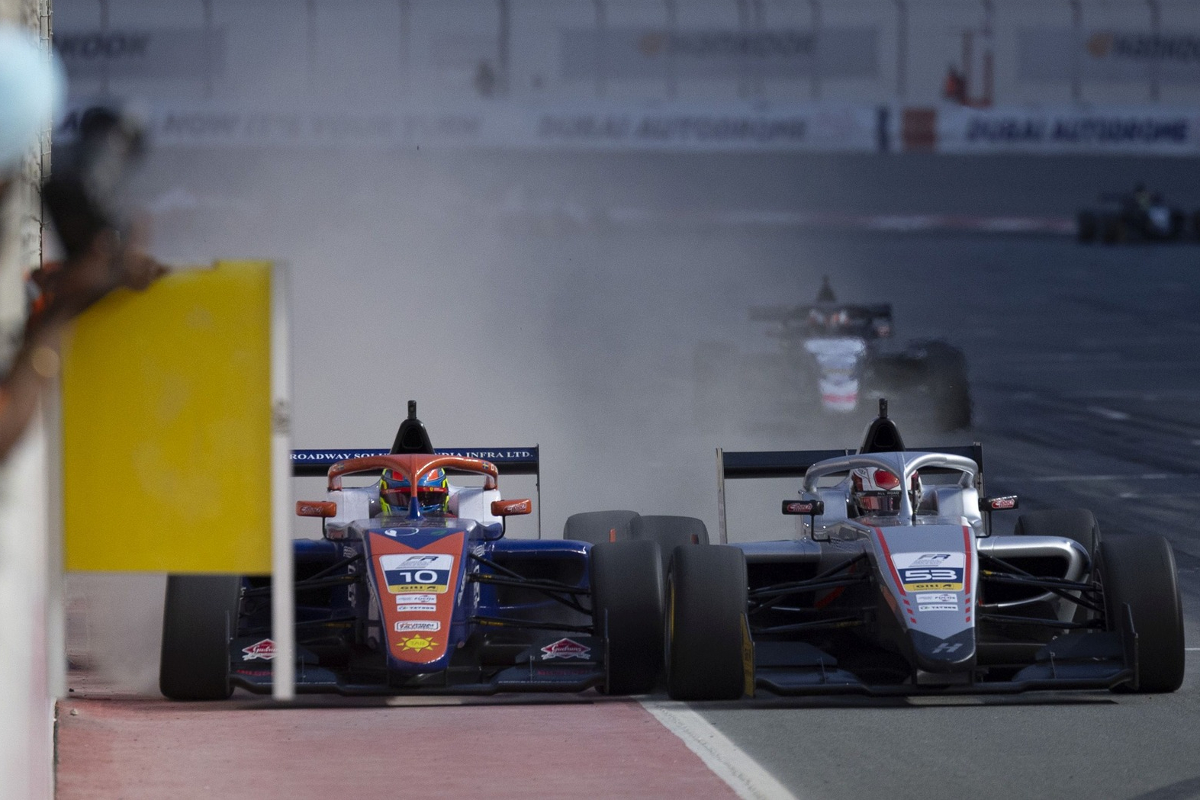 The Formula Regional Middle East championship has explained to Formula Scout the confusion behind the finish to its first ever race.

The series, created from a rebrand of FRegional Asia following its decision to race in Kuwait and the United Arab Emirates for 2023, kicked off last weekend at Dubai Autodrome.

Hitech GP’s Gabriele Mini and Mumbai Falcons’ Dino Beganovic fought for victory in the inaugural race until the end of the penultimate lap, when Mini squeezed Beganovic to the pit wall as they crossed the line and then backed off believing the race was complete. The television commentator was also caught out, and by the time they realised otherwise it was too late.

The primary loser from the confusion was Mini, who finished sixth on-the-road but was dropped to 11th by the stewards post-race.

Hitech team boss Oliver Oakes said to Formula Scout it was an “unfortunate mistake” that stemmed from the live timing provider as “it displayed ‘last lap’ on the pitwall timing screens because the drivers passed the line with a few seconds to force the plus one lap rule of race distance”.

The issue looked to be quickly rectified as when “the leader came out of last corner the race director said over team manager radio one more lap”. The chequered flag was not waved, and “when the leaders crossed the line it was shown the last lap board”. But “Mini didnt see it – as he was busy defending Beganovic – and then celebrating thinking he had won”.

Oakes added: “It’s easy to say Mini should have raced to the flag but he was in the heat of the moment. He had been racing Dino for two laps wheel-to-wheel because he had used tyres and Dino had four new, he was under a lot of pressure. The two of them were the class of the field driving away and Gabriele wasnt going to give up that win easily!”

FRMEC series manager Matthijs Hoitink also gave a statement to Formula Scout explaining the finish, which read as below:

“1. The race distance was 28 minutes plus one lap;
2. The last lap board on the pitwall to the drivers was shown at the correct time;
3. The number of seconds remaining when they crossed the finish line on the penultimate lap was 23
4. The chequered flag was presented at the correct time;
5. The TV feed channels on the pit wall were displaying the correct information at all times;
6. There was an issue with the live timing on the website where, due to a programming error, ‘last lap’ was displayed early. TV production may have used the internet feed for their timing display on the livestream;
7. The race director noticed there was a problem with live timing on the website and clarified by radio message to ignore the ‘last lap’ message on the live timing website.”

There was further drama in the following races, and Mumbai Falcons’ Andrea Kimi Antonelli and Rafael Camara emerged top of the standings despite only earning one podium between them.