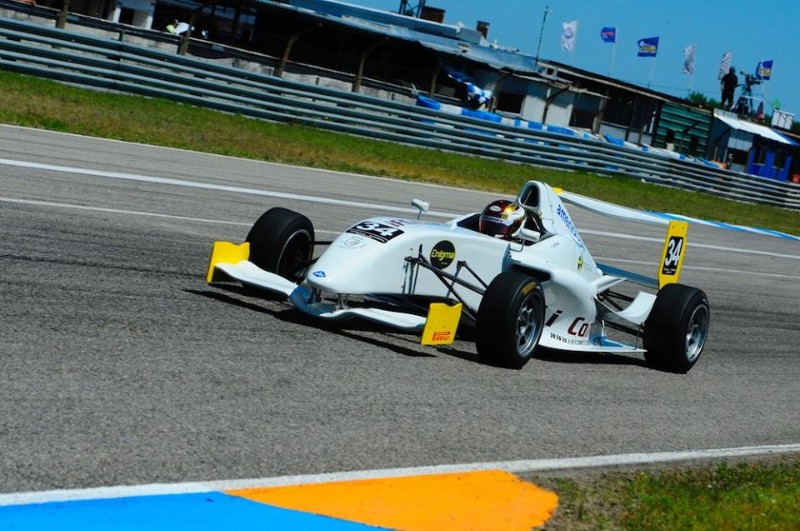 It took until the final race of the season for Juan Vieira to stand on top of the Formula Academy Sudamericana podium, but in doing so he became the 2018 champion.

The El Pinar round marked the only time this season the championship has raced in Uruguay, having previously mostly been based in the country, and local driver Facundo Ferra led the return by taking pole. Vieira shared the front row, just 0.164 seconds off of pole. Ferra’s fellow Uruguayan Facundo Garese was third fastest, just beating Vieira’s title rival Leandro Guedes.

Ferra fluffed his start, allowing 2016 champion Garese into the lead ahead of Andres De Araujo. Vieira, who finished 23rd in 2016 and Guedes, who was 15th that year, crashed on the first lap, meaning they went into the final race still separated by just one point.

Garese found a rythmn up front, while De Araujo and Testa fought for second. De Araujo used his local knowledge to take the position and then Garese, finishing 0.678s off victory. Ferra also retired, while third for Testa meant he closed to within four points of the championship lead.

Vieira and Guedes were put directly against each other at the front of the title deciding race thanks to their race one retirements, but were both beaten to the lead by Ferra. The top two pulled away from Guedes, and Ferra looked set for victory until two laps to go. This handed the lead to Vieira, who ignored the pressure to win the 2018 title with a convincing 6.825s victory.

De Araujo benefited from Ferra’s problems to take the final podium spot, and jump up to sixth in the standings. Testa failed to finish, meaning he ended the season a lonely third in the standings ahead of the absent Nathan Brito and Bruna Tomaselli.