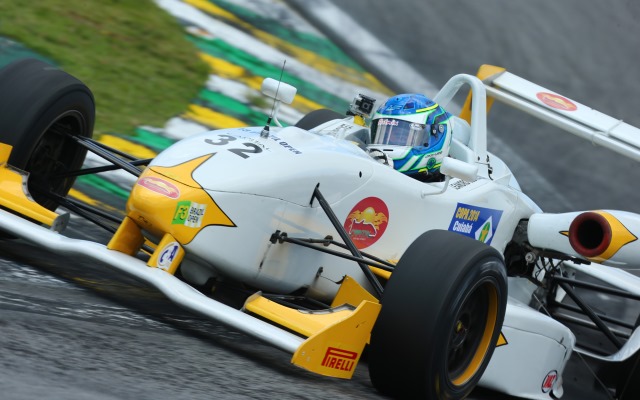 Leandro Florenzo took a surprise win in the Pre-Final for the Formula 3 Brazil Open on Saturday at Interlagos.

The Capital Motorsport man was the second driver to take the checkered flag, however he was promoted to first place after Felipe Guimaraes was penalized due to a overtake under a yellow flag.

Guimaraes was actually penalized twice in the race. The Brazilian was earlier hit with drive-through after he jumped a restart after a safety-car period. The caution was then thrown out for a crash between Dzhon Simonyan and Raphael Raucci.

Guimares returned to the track in fifth, but did not take too long to work his way back up into the lead. However, when he was side by side with Florenzo, in the battle for second place, the yellow flag appeared at turn six caused by a spin by Nicholas Silva.

Guimaraes completed the manoeuvre but was once again penalized and received 20 seconds added to his race time. With the Hitech man relegated, Florenzo was promoted to the lead after mechanical problems for leaders Victor Franzoni and Fernando Galera. The Capital Motorsports driver held off Lukas Moraes, who started last, to win the race by only 0.697s.

Artur Fortunato was third, while Guimaraes was classified fourth. Only five drivers managed to cross the finish line, with Silva being the last of them.

Florenzo will start this Sunday?s Final race on pole, followed by Moraes, Fortunato and Guimaraes.

Earlier in the day, Guimaraes won heat two with no difficulties. The Hitech man led every lap and cruised to an easy win.

After a poor Friday, with so many problems in his Cesario machinery, Simonyan finally had a trouble-free race. The Russian had a good start, overtook Moraes on lap one and kept his second position during the whole race distance. However, he could not match Guimaraes? pace and finished 26s behind the leader.

Guimaraes? closest rival in heat one, Franzoni had a turbulent race. The Brazilian had too much wheelspin at the start and fell to fourth. However, the Hitech driver recovered his pace and put Moraes under heavy pressure. They went side by side on lap nine, but came together after turn three.

Raucci was the lucky man after the accident. The driver from Sao Paulo gained two positions and finished third. Fourth overall, Fortunato also benefited and won Class B in his Dallara F301. The 17-year-old driver was followed by Florenzo, Silva, Victor Miranda, Galera and Moraes.