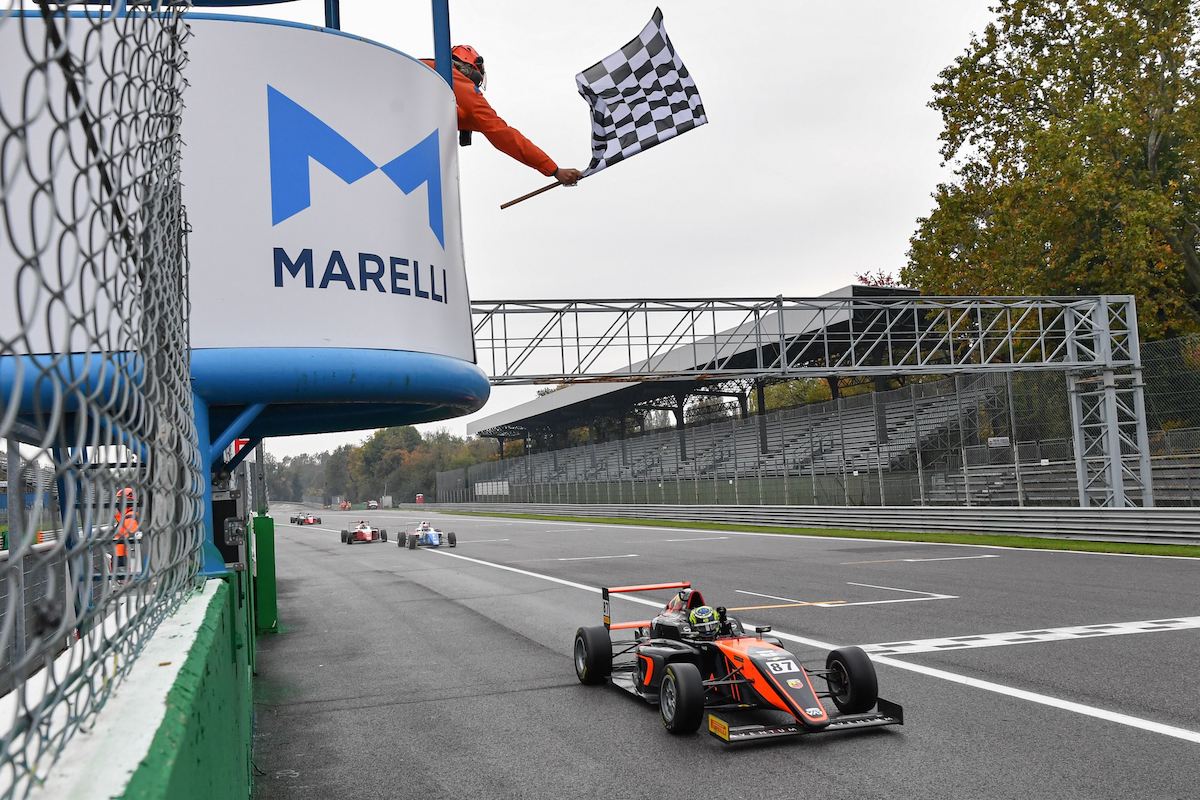 Ollie Bearman completed a perfect weekend at Monza by controlling the final race of the Italian Formula 4 season from the front to take his 11th win of the campaign.

Having taken the lead on the first lap, Bearman drove a flawless race on slicks on a slippery surface and was able to manage the gap to the rest of the field to the flag.

The Van Amersfoort Racing driver made an excellent start on a track that was still damp from earlier rain to jump from eighth on the grid to third by the first chicane. Having passed front-row starter Andrea Kimi Antonelli into Ascari, Bearman immediately took the lead as pole-sitter Lorenzo Patrese ran wide at Parabolica at the end on the first lap.

Bearman was unchallenged for the remainder of the 14-lap race, managing two safety car restarts which had twice brought his pursuers back onto his tail.

Prema Powerteam’s Kirill Smal came through to take second place, holding off his team-mate Andrea Kimi Antonelli who took his third podium of the weekend.

Antonelli enjoyed a race long duel with Lorenzo Patrese for AKM Motorsport and championship runner-up Tim Tramnitz (US Racing). Patrese had dropped behind Antonelli in the early stages before repassing his rival into Parabolica just before the first safety car period caused by a spin for Erick Zuniga.

However, Antonelli was able to outdrag Patrese on the run from Roggia to Lesmo on lap 8 to regain the position which he held to the end. Tramnitz challenged Patrese for fourth but was unable to make a move stick.

Joshua Duerksen took sixth for Mucke Motorsport, ahead of Vlad Lomko (US Racing) and Joshua Dufek for VAR. Maceo Capietto put in another strong drive to take ninth from 23rd on the grid, setting the fastest lap on the race in the process.

Sebastian Montoya had made progress to run sixth, just behind the leading group, but made a mistake as he weaved to keep heat in his tyres behind the safety car and spun into retirement at Curva Grande.

Much of the drama was provided by the rookie title contenders. VAR’s Nikita Bedrin had chosen to start on wet tyres, but as the track dried he fell back down the order. His rival, Prema’s Conrad Laursen, was running in eighth and looked to have the rookie crown in his pocket when he spun exiting the Roggia dropping to the tail of the field and gifting the title to Bedrin.

The unfortunate Leonardo Fornaroli was unable to take the start having broken his wrist in his race-ending crash in race two, which was caused by a lack of visibility when his fire extinguisher went off. With neither Montoya nor Fornaroli scoring, Smal’s second place moved him up to third in the final championship standings.