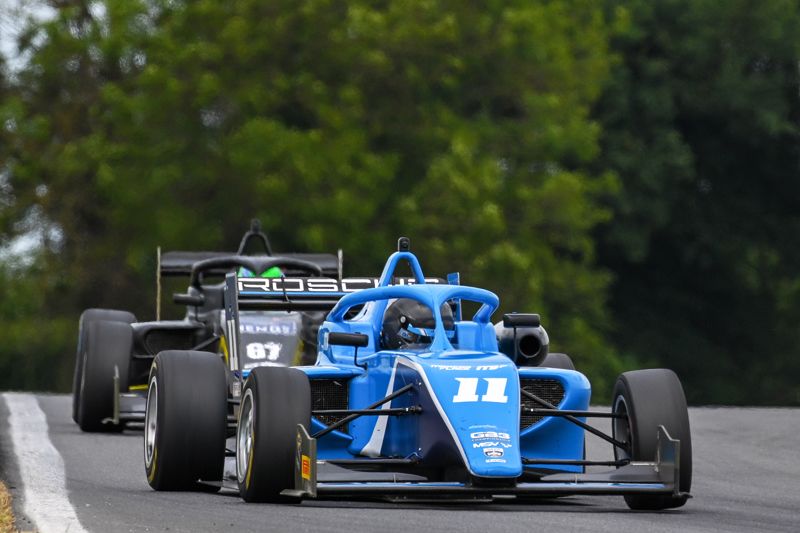 Douglas Motorsport’s Marcos Flack took a maiden GB3 win in an epic final race of the weekend at Silverstone, while points leader Joel Granfors stormed from 18th to third.

Tommy Smith tried to snatch second through Maggotts and Becketts, but contact spun Oxley and allowed Smith’s team-mate Flack, who started from sixth, to move into second.

Flack then took the lead from Taylor at Brooklands, while Hillspeed’s Nick Gilkes made great progress from eighth to run third. Gilkes tried a move for second on Taylor into Vale, but ended up spinning.

Granfors made remarkable progress early on, gaining 14 places to run fourth behind Carlin’s Roberto Faria, who had climbed from 13th on the grid.

As Faria and Taylor went side-by-side down the Wellington Straight, Granfors tried to take the pair of them for second but ran out of space and backed out.

Faria eventually moved into second ahead of Taylor, while Granfors came under pressure from JHR Developments’ Matthew Rees, with Carlin’s Callum Voisin and Hitech’s Luke Browning climbing from the grid’s 11th row to join the battle.

Rees lost out to Voisin and Browning, the latter sweeping around the outside at Aintree, as Granfors broke clear and took third from Taylor.

Voisin also demoted Taylor, who then found himself in a three-wide battle approaching Maggotts with Browning and Rees. Browning came out on top to snatch fifth, while Rees backed out by going off-track.

Flack finished 6.176 seconds clear of Faria, with Granfors completing the podium a further two seconds back to extend his points lead over Browning, who was fifth behind Voisin.

Rees finished sixth ahead of Smith and Fortec’s Mikkel Grundtvig. David Morales was ninth for Arden, while Taylor slipped back to 10th.

Elite Motorsport’s John Bennett was another to make up ground early on from 15th to eighth, but was taken out at Brooklands by Arden’s Nico Christodoulou, who lost control on the way in and ended up a distant 18th.

Douglas driver Max Esterson was another in the wars, losing his front wing on the Hangar Straight while battling Grundtvig before sliding into the gravel at Stowe.