Five things we learned from the inaugural FIA Formula 3 event 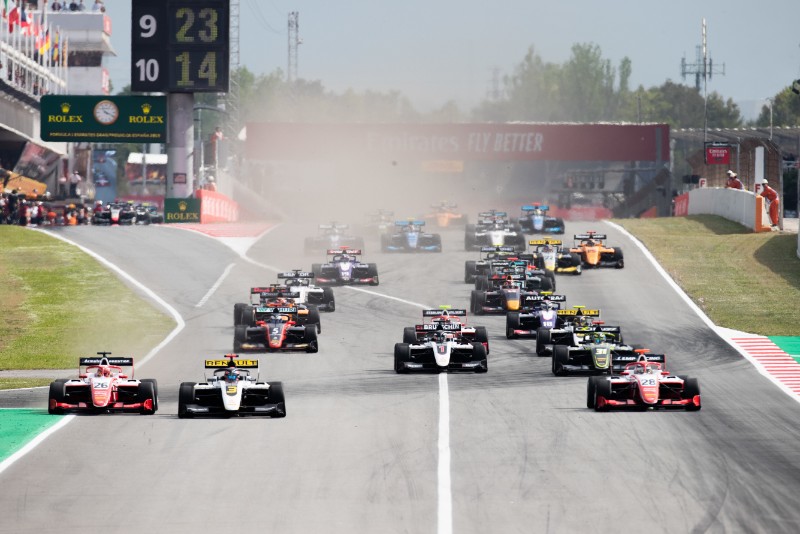 If it wasn’t going to convince the Formula 3 purists at round one, then the FIA F3 Championship had to prove it was least as entertaining on its debut at Barcelona last weekend.

Expanded DRS usage combined with suspension set-up freedom and an aerodynamic package “optimised to facilitate overtaking” were just some of the features introduced to try to achieve that, but in the end it felt like any other F3 or GP3 weekend with the same two teams at the front, a battle between Ferrari and Renault Formula 1 juniors, and a touch of controversy.

16 races is not enough 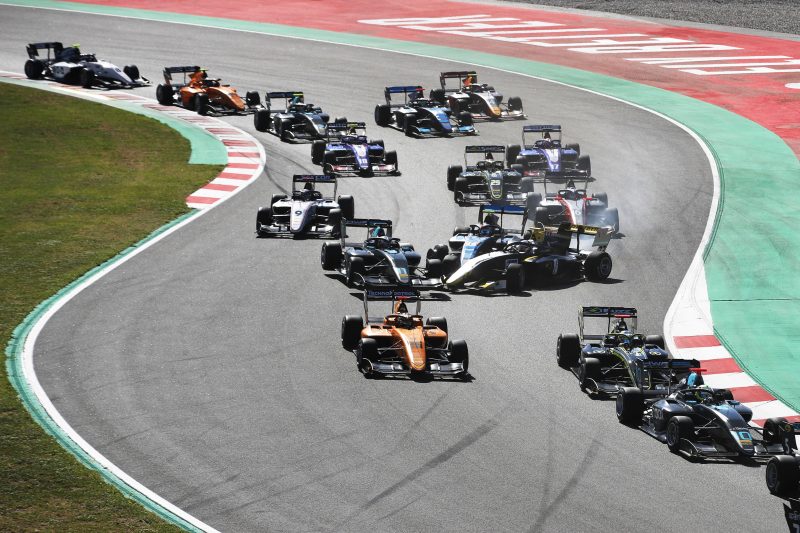 You know the situation isn?t ideal when there are arguably more potential race-winners on the grid than races on the calendar. FIA F3 inherited GP3?s two-race format, but Euro F3?s three-race weekends would have far better suited this championship.

It would be difficult to add extra rounds to the eight-weekend season without including a trip to Hockenheim. European street tracks like Baku and Monaco, which fellow F1 support Formula 2 visits, would surely be disastrous with a field of 30 drivers, while rounds outside of Europe would increase the already expensive running costs. ?

So the obvious alternative solution is to add a third race to the weekend, and there would be room on the F1 weekend with a bit of reshuffling if Liberty and the FIA really wanted to. The extra race could be run on either Friday or Saturday afternoon. The second best qualifying times could be used to set the grid for the third race, with the second reversed-grid race remaining (although perhaps extending it to the top 10 being reversed).

The current format is incredibly cruel to any driver who has a poor feature race, and retirement would lead to them starting from the back of the later race.?While this may have been 20th in GP3 last year – and thus recoverable – this year it could be as low as 30th. A third race would give an opportunity for those unfortunate drivers to walk away from the weekend with some points.

On the subject of points, the current system is also not fit for this F3. Both races saw brilliant battles outside the top 10, for example Jake Hughes stormed from 29th on the grid to 17th in the feature race, but was rewarded with nothing, and would have had to make similar gains in race two just to score a solitary point. Furthermore, Euroformula Open champion Felipe Drugovich battled from 20th to 11th in the opening race, and also has nothing to show for it.

It would also be particularly helpful if ART Grand Prix and Prema are going to continue to lock out the top positions, because it would allow us to separate, for example, the Carlin and and HWA Racelab drivers, whose respective teams may be worlds away in the competitive order but are both currently consigned to zero points.

Picking a new position to award points from is a fairly arbitrary choice, but 15th place would give a more accurate picture of the championship order, and applying it to both races would solve the current confusion of having two different points systems active in the championship. 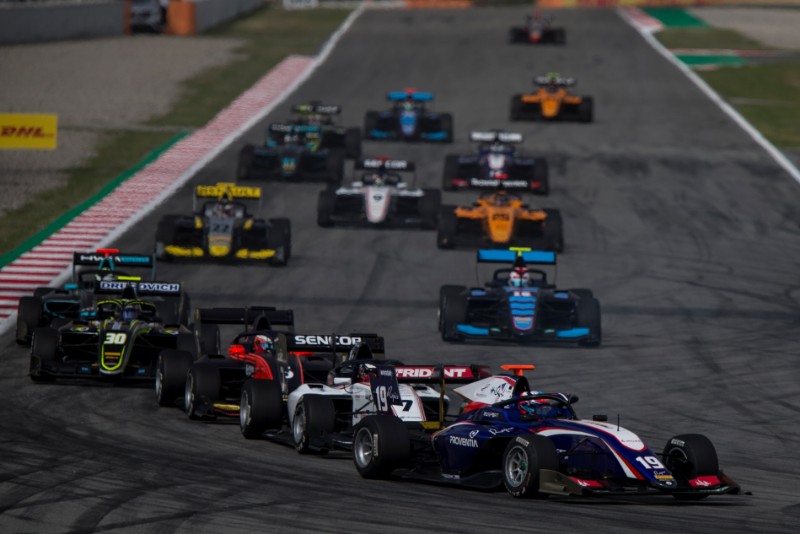 One of the changes for this year?s rules package is the unlimited usage of DRS. The overtaking band-aid, which is also utilised in F1 and F2, failed to make a significant improvement to ?the show? in the races throughout the weekend, and also was not without its teething troubles.

While Barcelona isn’t the easiest circuit to overtake on, the very long pit straight should have at least provided a bit more opportunity into the first corner than it did. The second DRS zone into the Turn 10 hairpin, was somewhat ineffective. Some of the moves it did produce felt very easy to execute, which at least is ideal practice for when a button can simply be pressed to overtake moving further up the ladder.

In the battle for points positions this rarely came into play though, perhaps suggesting most moves were completed when the car behind really was a whole lot faster than the car in front, and with a 30-car grid more prone to causing safety car periods, there’s already a natural feature of the championship that should keep the racing close.

It?s Prema vs ART at the top 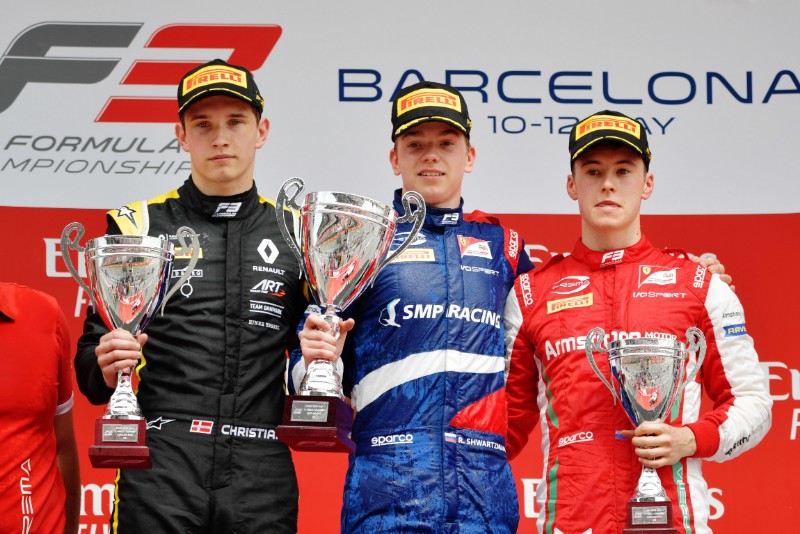 It is hardly a huge surprise to see that Prema and ART ? the two juggernauts in European F3 and GP3 level respectively throughout the 2010s ? have hit the ground running with this all-new F3 package. Prema may have won both races with Robert Shwartzman and Jehan Daruvala and taken a further podium with Marcus Armstrong, but it was ART?s Christian Lundgaard who stood out in the feature race.

Lundgaard won the race ?on the road? but was penalised for a virtual safety car infringement. He bounced back by passing both of his team-mates on track in the sprint race, showcasing continued momentum from his Formula Renault Eurocup title near-miss last year on what was his full-season debut at this level. Shwartzman, however, leads the championship after his pole, feature race win and fourth in the sprint race, and Prema already is aiming to end ART?s stranglehold on titles at this level with a commanding early lead in the title race.

Points of course don’t show the whole picture this early on, but only Hitech GP’s Juri Vips and third tier veteran Niko Kari have prevented the teams from locking out the top six places in the standings, and the combined points tally of ART, Hitech and Trident only just eclipses Prema’s early mark.

The top two teams looked least dominant in qualifying, only 0.685 seconds clear of Carlin rookie Logan Sargeant in a session where so many laps were affected by traffic, but Vips only just prevented the top six lockout in the feature race, and did well to do it again in the sprint encounter. 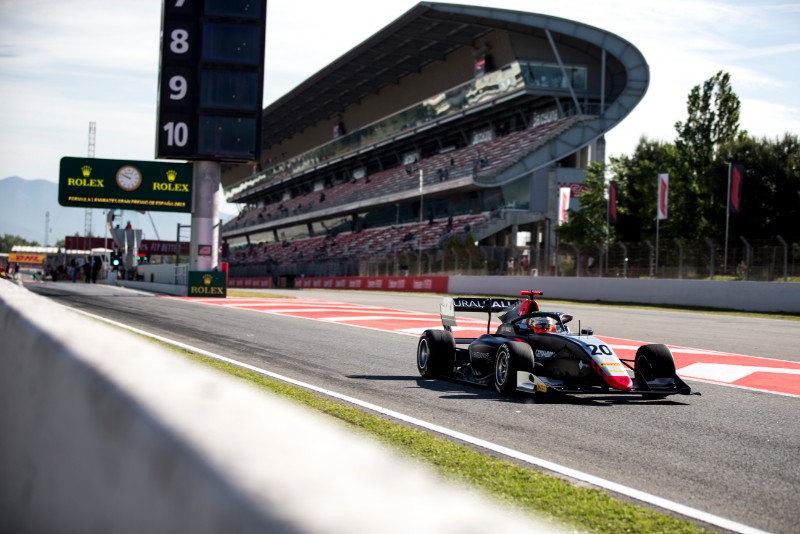 While Red Bull junior Vips looked a match to the ART/Prema juggernaut in qualifying and the races, his Hitech GP team-mates were strangely off the pace at Barcelona.

Leonardo Pulcini, who performed giantkilling acts in GP3 last year for Campos Racing, was many people’s title favourite going into Barcelona off the back of his spellbinding testing pace, and if not overall favourite then at least the best outside of the top two teams.

The Italian was 24th in free practise, almost two seconds off the pace, and although he improved to 18th in qualifying he was consistently almost a second off the pace in the two races and left with a best finish of 20th.

His race one result was partly to blame for failing to get away from the grid on the formation lap and having to start from the pitlane, then receiving a penalty for an unsafe re-entry to the track at Turn 2 (a offence numerous drivers were pinged for).

Yifei Ye also shone in testing, and earned the backing of Renault, but was anonymous at Barcelona and got shunted out of race two at the start.

Vips’ points tally alone was enough to put Hitech third in the standings, and the race management that earned him second place in the sprint race not only shows his talents but that his team definitely has a car that can fight at the front. Which poses big questions as to where Pulcini and Ye were really at during the season opener.

The hidden stars of the weekend 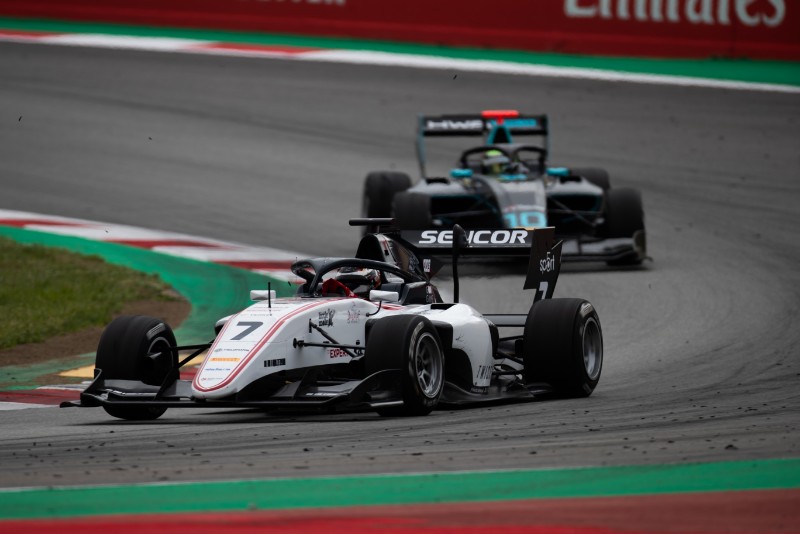 Sauber Junior Team by Charouz, contesting its first season at this level, looked to be one of the weaker teams during testing and it continued this trend into Barcelona. It had one shining light though, and one making the biggest jump up to this level: Lirim Zendeli.

The reigning ADAC Formula 4 champion finished in the top 15 in both races in his first races outside of F4. He was best placed of the team’s three drivers in every session, and was only four seconds away from the points in the sprint race.

Red Bull junior Yuki Tsunoda was another to come from F4 (admittedly with a successful weekend racing in Euroformula Open already under his belt), and the Japanese champion achieved similar feats at Jenzer Motorsport.

In qualifying he was 0.9s off pole, and 16 places ahead of his closest team-mate, a result which he converted into 10th place in the feature race. A point on his debut was mightily impressive, although his fastest lap times were some way off those ahead.

He led the Jenzer charge again in the sprint race, but simply didn’t have the pace to pinch the single point for eighth place from ART’s Max Fewtrell.

Although the weakest of the ART trio, Fewtrell by no means embarrassed himself with two points finishes, and probably learned more for his team in the midfield than if he was counting the laps in fresh air up front. The Briton is well known for his mental resilience, and he’ll be trying his hardest to match Lundgaard and David Beckmann.