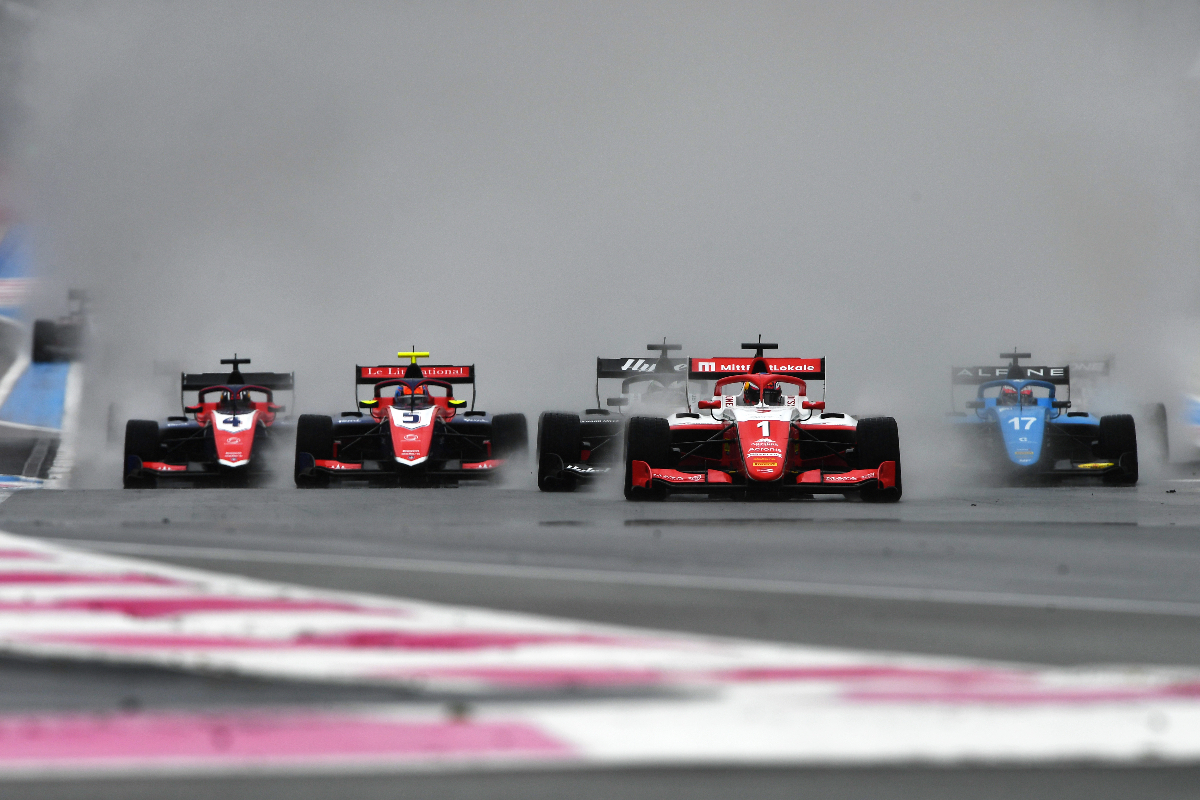 The FIA Formula 3 Championship returned from a month-long break with a round at Paul Ricard and produced two first-time winners and some thrilling races in France. Here are five things we took away

Paul Ricard is not a circuit many get excited about for racing. Formula 1’s two previous visits were total bores, and the expansive amounts of run-off can be off-putting.

In the junior ranks, however, it can produce some stunning racing. The FIA Formula 3 Championship this year was no different. Rain came into play on Sunday, setting up a battle between the Red Bull-supported Jack Doohan and Dennis Hauger.

Their performances through the weekend were excellent enough to warrant their own piece, so keep an eye on Formula Scout for that to come.

Elsewhere, there were a number of stories from the weekend, so here is your roundup from the racing at Paul Ricard:

Race one won’t always be a bore

Let’s be totally frank here: the curtain-raiser at Barcelona was not the explosive first act anybody was hoping for. All 30 drivers were well-behaved and the circuit layout and track conditions made race one, won by ART Grand Prix’s Alexander Smolyar, totally processional.

Smolyar won again at Paul Ricard, but the race he did it in was far more memorable. There was overtaking all over the place, and the Russian worked his way past Jenzer Motorsport’s Calan Williams, who had started from reversed grid pole.

“I was not sure I’m going to win. I was hoping to fight for the podium, definitely. I think our race pace was really good. Qualifying yesterday didn’t work out too well. In the middle of the race when I saw that I was much quicker than the guys in front. I was not actually expecting that. I saw it was possible to win and I was pushing for it.” 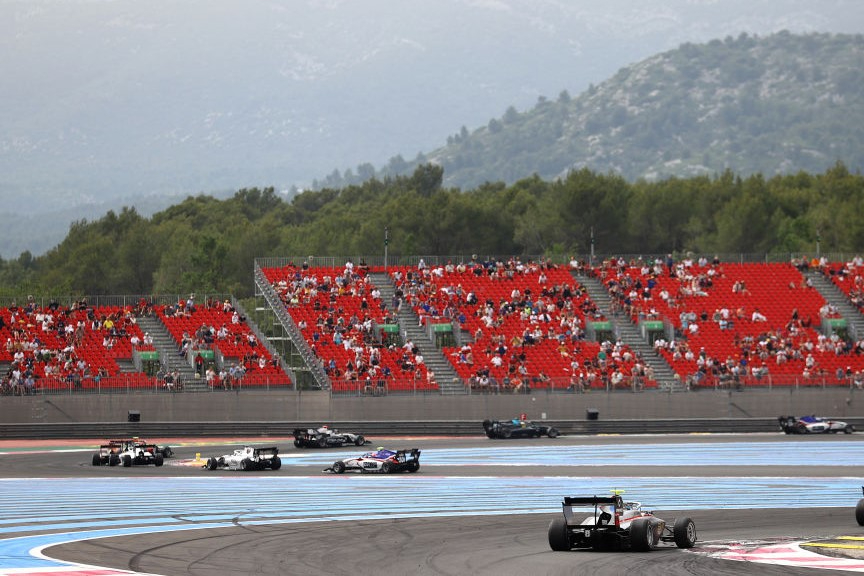 It was a superb drive from Smolyar, and despite the high-profile names in the other cars it’s the SMP Racing protege who is spearheading the ART GP charge at the moment.

“We improved a lot compared to last year. I have much more experience. So, definitely coming to the races, I feel much more confident, and I got two wins already. But it’s only race ones.

“So, I really try to push to improve my qualifying. And to find more for the winning race three, because obviously, it’s worth more points. It’s more important. But definitely, I’m happy we improved the speed. We have really experienced drivers one and we see Fred is also really quick. So, we have a good team. We have good team-mates right now. And we are improving, and I hope I will be improving too.”

Elsewhere, however, the big gainers in that race were MP Motorsport’s Victor Martins (up eight places), HWA Racelab’s Oliver Rasmussen (up seven) and Prema’s Arthur Leclerc, who gained a staggering 18 positions from his starting spot…

Leclerc proves his worth

Speaking of which, the Prema driver has had to do a lot of overtaking so far in his FIA F3 career to make an impact. His fine efforts went totally unrewarded in Barcelona but his race one climb at Paul Ricard put him on reversed grid pole for race two.

That second race was largely a Prema display of the likes we have become accustomed in FIA F3. The once crushingly dominant force was at the front again, and the younger Leclerc proved what he was capable of by comfortably keeping Olli Caldwell at bay, before having to fend off other team-mate Hauger.

Leclerc showed that if he is out front, he can mix it with the series’ best. His suspension failure in qualifying does come down to him, however, as does his poor qualifying in Spain. But should he be able to capture some form over one lap, he will be a threat in every race for the remainder of the season. 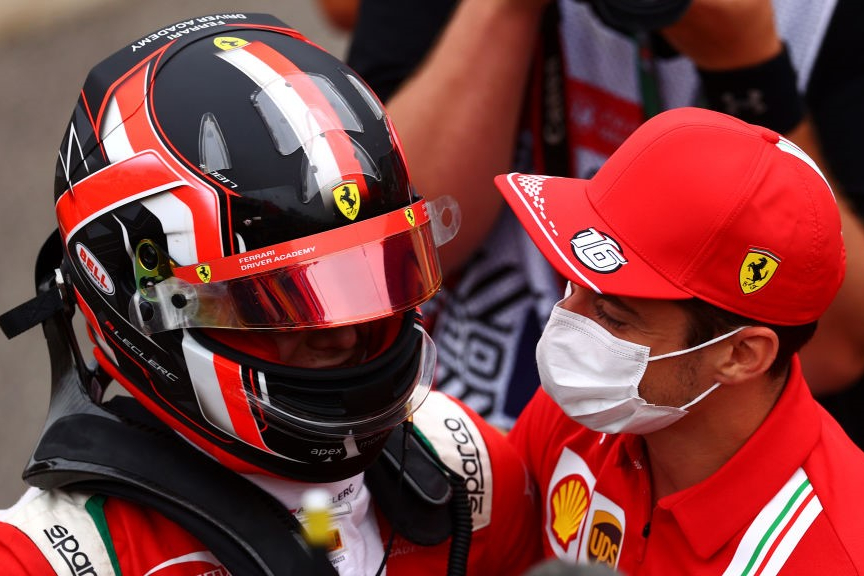 “In the beginning this morning, I went with my mind. I said I I have to maximise all the opportunities that I get and focus on my job,” he said. “We knew we had the pace straight away from FP for quali. But [in qualifying] I was a little bit unfortunate.

“It was a really good recovery this morning. To be honest, I didn’t expect to come back so far through the grid and we made it to P1 this afternoon.”

He added: “It’s quite special to get this first win, especially in this category, because we have 30 drivers, we are all really strong. All of the teams have really competitive drivers as well.

“It feels great to be at the top. As I said, we point to a weak point for my part. So, I need just to work and to focus in qualify to get better and better. And then the weekends will be better.”

Arthur was greeted by his older brother Charles and the Ferrari Formula 1 team he is a junior driver of as he celebrated victory.

“[Charles] told me ‘bravo’, but he was I think a bit under the [influence of] emotions, me as well. To be honest, we didn’t speak much, I just hug him. It was really special to have my family here. There are my friends as well on the grandstand, it was really a great feeling. And to see all the Ferrari team really supporting is great. The Ferrari Driver Academy have done an amazing job with Prema to just get me ready to be competitive. So I want to thank them a lot.

More of a title picture shaping up than in F2

Formula 2’s title narrative is fairly light after three rounds which have produced wildly different results, and how the championship is going to play out won’t become apparent for quite some time yet.

Things are a little different in FIA F3. Two rounds in and a picture is already starting to emerge. 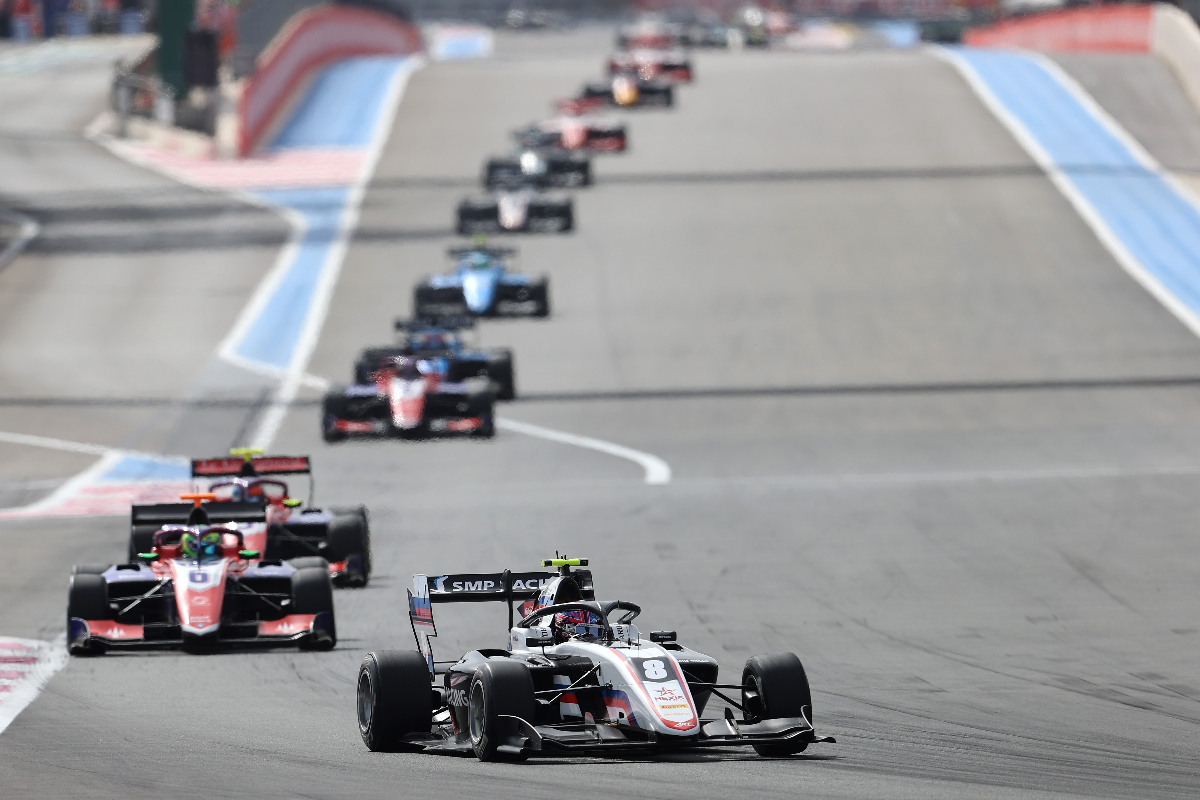 While the likes of Prema, Trident and ART expectedly are towards the top, they are being pushed forward by one driver each so far. Hauger, Doohan and Smolyar have all been superb so far this season.

A number of drivers from the aforementioned teams have also shown potential to properly thrust themselves into the mix too. Leclerc (if he gets his qualifying sorted) and Frederik Vesti (who needs answers after this weekend) certainly have the potential to get into the mix. Clement Novalak is stealthily in contention too for Trident. Caldwell might even be in the mix too, but he will need stronger performances than he mustered up at Ricard.

There is one team missing from this discussion, however…

Alpine juniors prove MP’s on the up

Frenchman Victor Martins had a sensational home event, notching up a second, third and fourth and gaining 16 places from his starting positions on Saturday alone. Things didn’t quite work for him in the rain of race three, but MP Motorsport team-mate Caio Collet came into his own on Sunday by climbing up the order to third.

Martins has been the most impressive rookie so far this season as a complete package (which should really be expected from the Formula Renault Eurocup champion), and is currently second in the standings, while there is no doubt that old rival Collet too will be a big player if he is able to string things together a bit more in qualifying.

“It’s working quite well with the team. Of course I’m doing good results for the start of the season,” said Martins.

“I don’t see myself as someone who always needs to be there or to show people that I’m there all the time. I just want to maximise the time on the track, to maximise what I’m learning, to not do like the same mistakes I did in Barcelona. 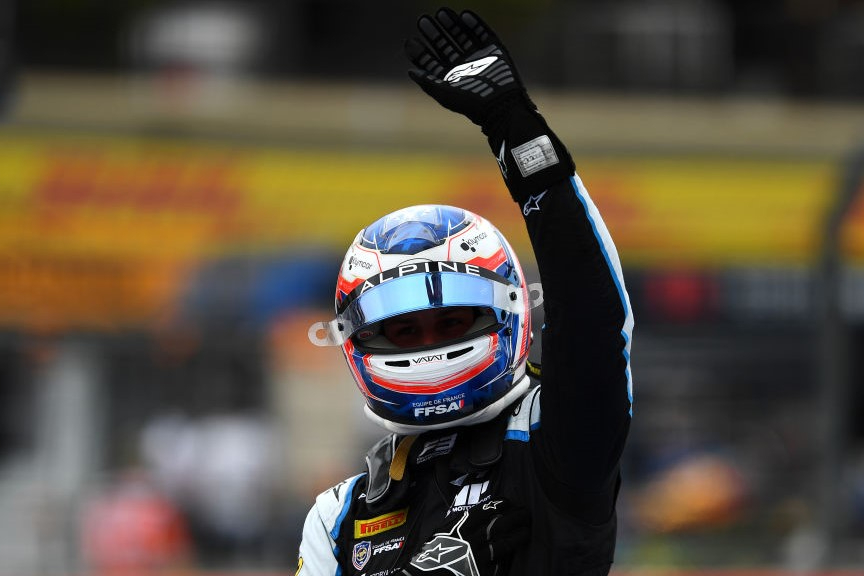 “And for the moment I’m just growing as an F3 driver in the races and in qualifying. So I want to keep my head down without too much expectation. Before this race I told to myself: I don’t want any expectation, I don’t want to tell myself maybe you need to go for another podium. I said that maybe another top six, top five would be good, then we get another podium. I just want to just keep this, step-by-step and session after session.”

Tyre wear was a big factor

In 2019, FIA F3 ran Pirelli’s medium compound at Paul Ricard. This year, it opted for the hard compound.

Drivers were unsure about tyre wear coming into this event, and it did prove to be a real factor in the races. That the teams were perhaps caught slightly off guard may have contributed to race one being so exciting, but they seemed to get things together by race two.

“I think it’s quite a technical track, especially going into the last sector where there are a lot of long corners,” Hauger said before the weekend.

The tyre wear questions came after qualifying, where Vesti took pole, but the second push lap of the final run ended up being slower than the first.

“There is a peak on the tyre and on this track I thought from what I’ve seen in the past years that we would have a good shot on lap two as well,” Hauger said to Formula Scout after qualifying second.

“And I was pushing for that to keep the tyres and try make a good lap on the last one. But it was just not there the same way it was on the first push. Overall grip was gone basically, so simple as that.”

As race three started wet but progressively got drier, wear predictably became a big factor on the grooved tyres. It will obviously go unknown how that race would have played out entirely in the dry, but it could have played a big role had the track only had overnight rain.