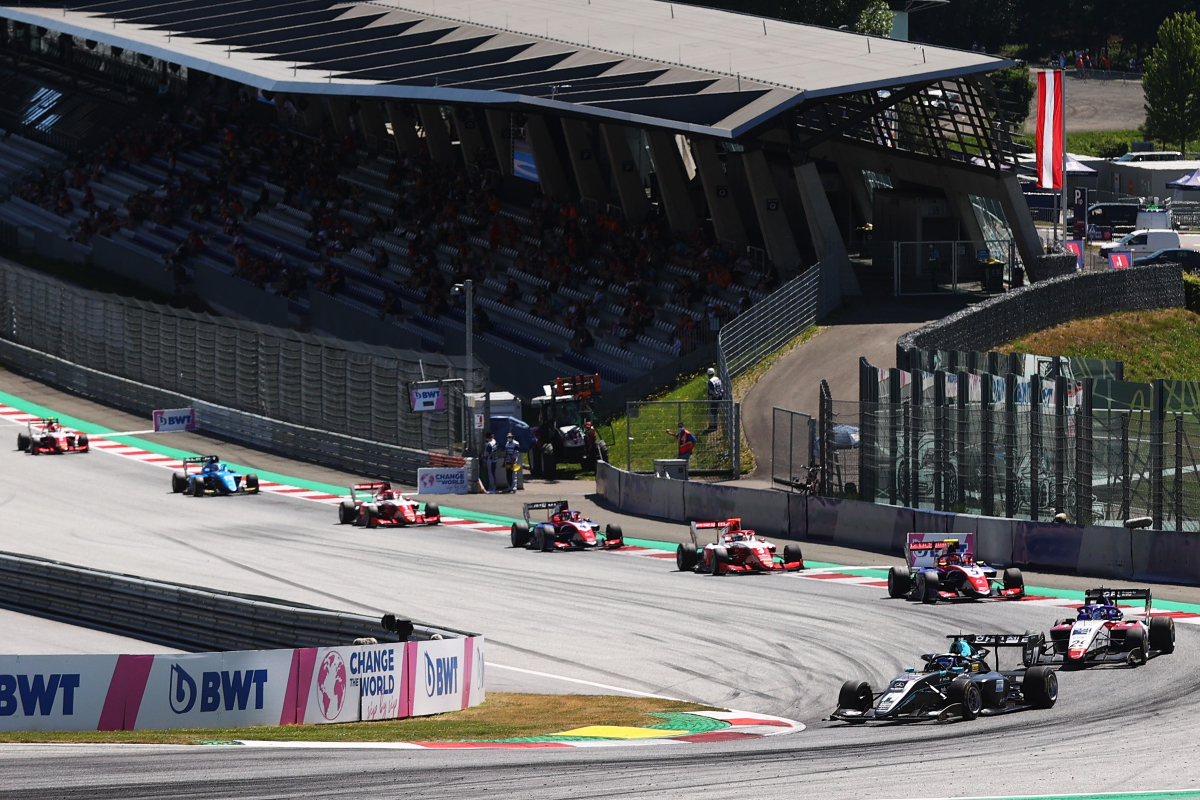 The FIA Formula 3 Championship produced three absolute corkers at the Red Bull Ring, with brilliant racing up and down the field across the 72 laps of racing action across the three races.

Qualifying in itself was a mess but the races were also marred by a large number of penalties. This meant a late night on Saturday for teams as there was a wait for the final results to come through, but the racing certainly made up for it.

When the current Dallara F3 2019 car was brought in, even with the Drag Reduction System, the racing wasn’t exactly much to write home about. There were some decent races here and there, but only this year has it come into its own.

The new format and selective calendar is largely behind it, and every round so far has has at least one entertaining race. In Austria, all three were exceptional. Race three’s podium of second-year drivers,were asked about the quality of the racing.

“For me, the racing seems better,” Prema’s Olli Caldwell said. “These new formats have certainly spiced things up.

“You’re getting people who’ve maybe been unlucky in qualifying, or have better race pace than in qualifying, starting at the front. And you’re putting the people who were quickest in qualifying more in the middle of the pack. It’s definitely spiced things up and I think it has improved racing.

“The championship’s super tight, everyone keeps moving around after each race. I guess if you look at it from an outside view and an inside view it’s very rare to be able to start P10 and finish on the podium last year, and years before that, so I’d say due to the new format it has improved racing.”

ART Grand Prix’s Frederik Vesti added that being able to go from the midfield to victory was the big change he’d noticed.

“This year it seems possible. In Paul Ricard there was a huge amount of overtakes, and even this weekend you can overtake, and it will happen with a few incidents and stuff like that and you can really make up good positions.

“When you put the fastest guys in qualifying in 12th, 11th and 10th, for sure there’s going to be stuff happening, and the guys in front will probably drop a bit and this creates really good racing. And I think that’s good for the championship. Although it can be a bit frustrating as a driver sometimes.”

Championship leader Dennis Hauger expanded on the mental approach with the more action-packed races of 2021.

“With the new format with race one and race two it’s a bit of a different mindset for the drivers,” he said.

“And also, depending on where you have qualified, so it’s a bit of a different weekend compared to last year. I’m thinking a bit more about everything during the race, so it’s made it a bit more tactical and more fun, and the racing has quite a lot happening all the way so it’s nice to see the racing going so well and it’s probably fun to watch.”

Prema looking good but not untouchable

A trio of podiums for Hauger, including a win from 12th, feels ominous going forward. He was able to involve himself in the front group of cars in every race, and making it into the top three meant the Prema driver sat in several press conferences.

While his form is strong, and now has a 41-point championship lead, the title is far from a forgone conclusion even if Prema has “found something good”. 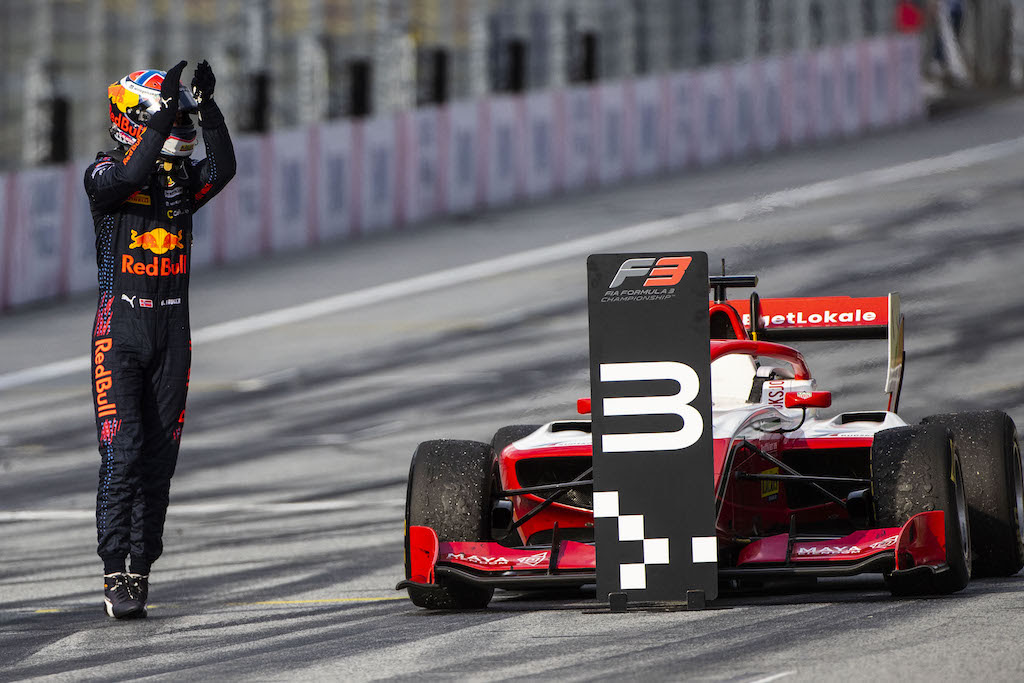 “Prema are a good team and they know what they’re doing, and we work really hard to optimise everything,” Hauger said.

“But on qualifying it’s super close, and we have found something good for the races and especially on this track it’s been working really well. It’s made us have a really good weekend overall.

“But it’s still a really close championship, with qualifying you can see how close it is and you have to really maximise everything. So it’s never a time to relax, and it’s a long season ahead. We have to keep developing ourselves and the car.”

Vesti is now Hauger’s closest title rival after a miserable weekend for MP Motorsport’s Victor Martins and Trident’s Jack Doohan – his previous nearest competitors. Having won for Prema at the Red Bull Ring last year, he offered his take.

“Of course I have some experience now from both cars. As Dennis said in qualifying, it’s extremely close,” he confirmed.

“I did the pole at Paul Ricard, and was 28 thousandths [of a second] off this weekend.

“In the races, it’s all about managing the tyres, here you’re a bit more able to push. The car is important, but it’s all about hard work and the range of where the Prema car is working is strong but that’s all up to hard work.”

David Schumacher finally claimed his first top 10 finish and did so in style with race two victory. It was a bizarre few hours as he was due to start the race from 17th, then was handed reversed grid pole after 11 penalties were dished out from race one.

“To be honest after ending race one I was not really looking forward to the next race,” said the Trident driver. 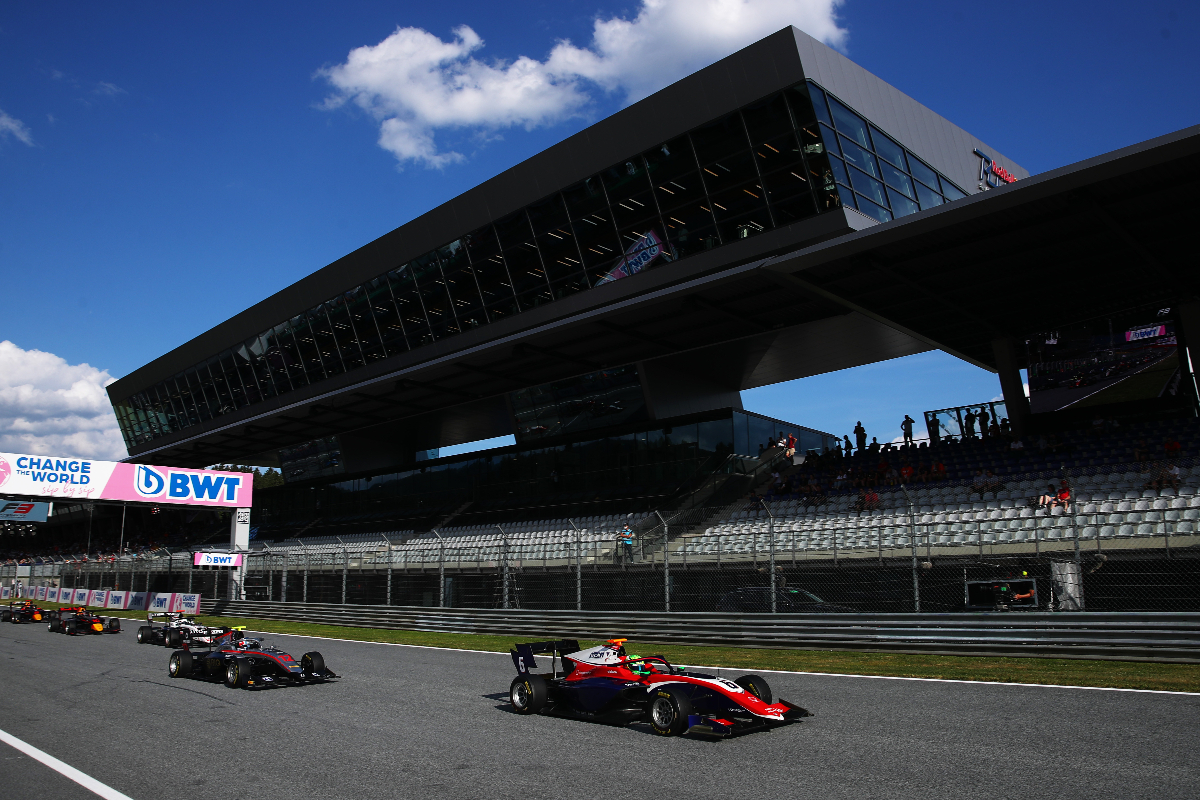 “Of course it would have been a lot of fun to try to get to the front, but all of a sudden half an hour before the race my team manager Giacomo Ricci came to me and he said ‘David, you’re starting from pole’.

“I just looked at him with big eyes and said ‘how is that possible?’. He told me that so many cars got penalties, and I was a bit confused to be honest and I didn’t believe him. And then he gave me the paper for the grid, and I was starting P1. I was like ‘okay, that makes things a bit more easy to get to the front’. It was a pretty fun moment at that time.”

It was only a two-second margin of success, but was a controlled win that ended a 28-race wait for points and finally delivered on his ‘high expectations’ for the season. Schumacher moves up to 14th in the standings, and his points haul ensures Trident remains second in the teams’ title race. However he will need to score more to keep Trident in that position.

“It feels amazing. The pressure relief after this race is just enormous. The first two race weekends were running really bad, also the first race of today was not really strong, and now to finally get a podium and even a win just feels amazing.”

He added: “To have a result like this is just a massive confidence boost and to see that I could run the pace throughout the whole race and keep really clean, it makes things much easier for me mentally.

Track limits not to be messed with

260 track limits violations took place across the weekend with over 400 laps nulled for running over the kerbs at the downhill right-handers that end the lap. Offences at the final corner led to the following laptime being deleted too.

The title contenders spoke about the situation early in the weekend, but after the penalties started coming in Vesti expanded on his take. 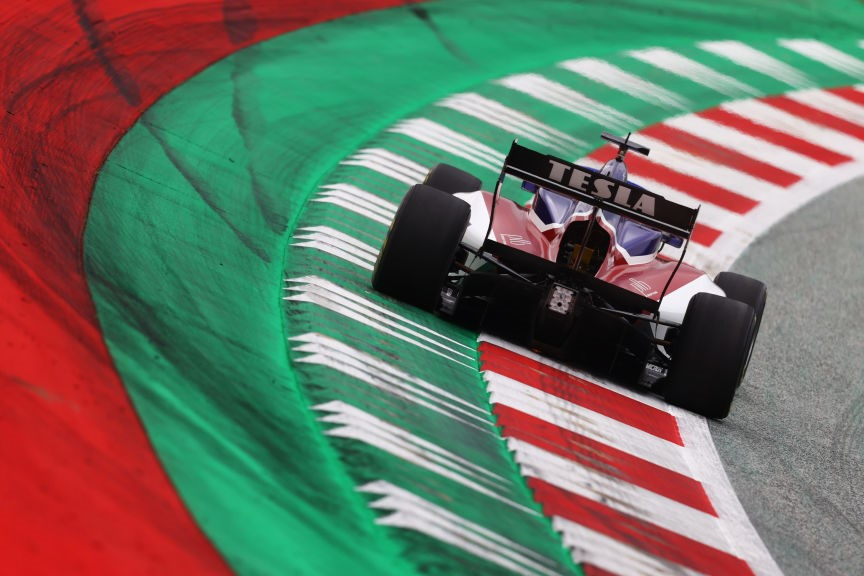 “The rule is very clear, and on Thursday evening at the briefing we were told quite clearly what were the consequences if you exceed the limits, and today was the result of that,” he said.

“I think everyone who didn’t get a penalty was quite happy to see that if you stay inside, yes you might be a little bit slower, but in the end it pays off to drive inside the track. So I think it’s good they enforce the rules as much as they do.”

Schumacher said he didn’t really get “why at this track we have the track limits on the red-and-white kerb and on every other track it’s just the white lines” and joined Vesti in suggesting gravel strips could be added to the exit of the penultimate corner.

Martins looks to Zhou for motivation

Alpine junior Guanyu Zhou took the place of two-time Formula 1 world champion Fernando Alonso in free practice one for the Austrian Grand Prix, marking the Formula 2 racer’s first F1 practice appearance, and he did a solid job with his chance.

Fellow Alpine Academy member Martins didn’t have as much reason to smile, as his weekend in F3 was a bit of a disaster with a mechanical issue in race two and two crashes in race three.

But before his weekend unravelled, dropping 43 points to Hauger and dropping from second to fifth in the standings, he spoke about the significance of Alpine running one of its juniors on a grand prix weekend after years of Renault neglecting to.

“For sure it’s giving me a lot of motivation and determination that you can see Alpine is giving an opportunity to a driver to discover how F1 is, working with a lot of engineers, driving on an F1 weekend,” he said to select media including Formula Scout. ”

The FIA F3 rookie said “it feels good” knowing he could follow Alpine’s F2 juniors’ tests in the Renault R.S.18 F1 car from 2018, but doesn’t want to be carried away by that prospect.

“After on my side I don’t want to really think about it, because it’s not my time, for the moment. I need to stay focused on my season, and I know if I do the job that I need to do in the car, if I continue like I’m doing now, I will maybe have the opportunity to maybe one day jump in an F1 car for free practice or even with the R.S.18. But to be honest it’s good [for Zhou], and I will be watching him.”