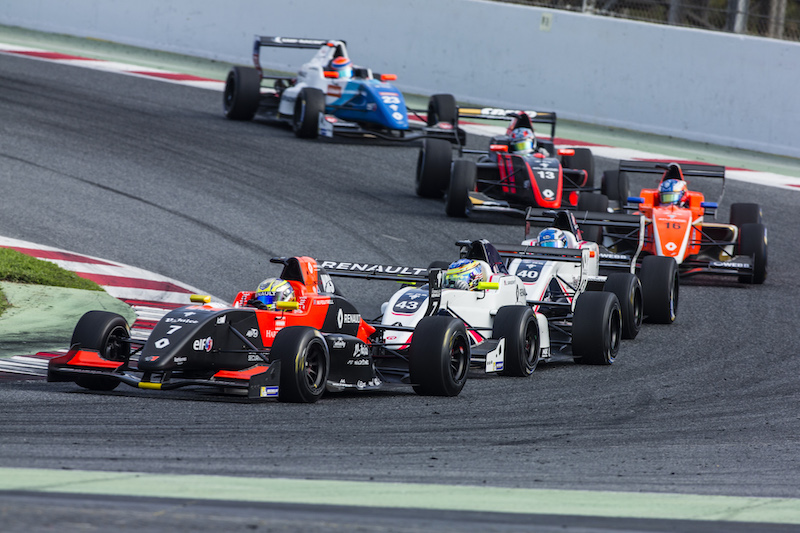 Five 2017 Formula 4 champions have taken up invites to take part in Tuesday’s Formula Renault Eurocup rookie test at Barcelona, where BRDC British Formula 3 champion Enaam Ahmed will also be among those in action.

Of the 35 drivers on the entry list for the test, 15 have been invited by Renault Sport, led by ADAC F4 champion Juri Vips, who will test for Josef Kaufmann Racing alongside the teams’ three-time 2017 podium finisher Yifei Ye.

Vips’ rival Felipe Drugovich will test for Arden Motorsport, fresh from winning on his Euroformula Open debut at the circuit on Sunday.

British F4 champion Jamie Caroline will test for Tech 1 Racing, with his closest challenger Oscar Piastri driving for his regular team Arden, as he did in the Northern European Cup finale at Hockenheim.

Renault Sport Academy member Christian Lundgaard will test with MP Motorsport, the team with which he won this year’s SMP F4 series and is leading the Spanish F4 series with one round to go. SMP-sponsored rival Alexander Smolyar will be with Tech 1 Racing.

Lundgaard’s brother Daniel won the Renault-powered Danish F4 series this year but is not at the test, with runner-up Frederik Vesti (also a race-winner in ADAC F4) and third-placed Christian Rasmussen instead taking up invites with Fortec and Burdett respectively.

With Italian F4 champion Marcus Armstrong most likely to move up to European F3 next year, Lorenzo Colombo will test with JD at Renault’s invitation after finishing third in the standings.

The newly-crowned Eurocup rookie champion Max Fewtrell will switch from Tech 1 to R-ace GP for the test as he prepares to return for a second season.

The champion team will run eight drivers in total, including Alex Peroni, who won in Pau this year for Fortec, former JD racer Alexander Vartanyan and fellow SMP protege Nikita Volegov, who steps up from the company’s F4 series.

They are joined by Charles Milesi, who did the NEC and four Eurocup rounds with the team this year, Logan Sargeant, who scored two top-10 finishes on his Eurocup debut with the team last weekend, and karting graduate Clement Novalak.

Fortec will run the two other BRDC British F3 drivers in action: Ahmed, who previously ran with the team at the end of 2015, and race-winner Jordan Cane.