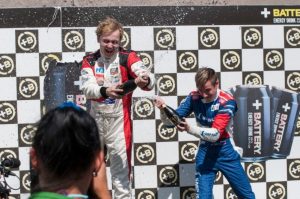 Finnish youngsters Konsta Lappalainen and Tuomas Haapalainen shared the wins in the opening round of the new Formula Academy Finland championship at Ahvenisto.

The five round calendar, spread over just four months and ran by former GP3 team Koiranen, is based primarily in Finland. The series runs to both Formula 4 and Formula Ford rules, with seven drivers entering in the F4 class for the season opener.

Haapalainen and Lappalainen are both previously winners in F4, and it was the greater experience of former F4 North-European Zone frontrunner Haapalainen that won out in qualifying. Lappalainen could only manage fourth, behind current F4 NEZ rivals Mikhail Belov and Ivan Berets.

A weak start for Haapalainen dropped him to fourth, with Lappalainen going the opposite way as they went into Turn 1. Lappalainen hung on to that lead for the rest of the race, as Haapalainen fought his way back up the order.

The battle for position between SMP Racing team-mates Belov and Berets allowed?Haapalainen to close in and pass both for second, with Belov taking the final spot on the podium by two tenths from Berets.

Between the latter two were the top three FFord drivers, with Elias Niskanen taking victory over Miikka Makela and Kosti Joutvuo.

The grid for the second race was the same as the first, with Haapalainen this time retaining his lead at the start. He remained under pressure from Lappalainen, who came within two tenths of victory.

Belov repeated his race one podium in third, just four tenths behind the winner, with Salmenautio a further two tenths behind.

Niskanen and Makela finished 1-2 in the FFord classification for a second time, with Tommi Heino beating Joutvuo to third.

Jimi Hannus?and?Milja Kukkonen will bring the numer of F4 entries up to nine at the second round of the season, which takes place at the auto24ring in Estonia later this month.