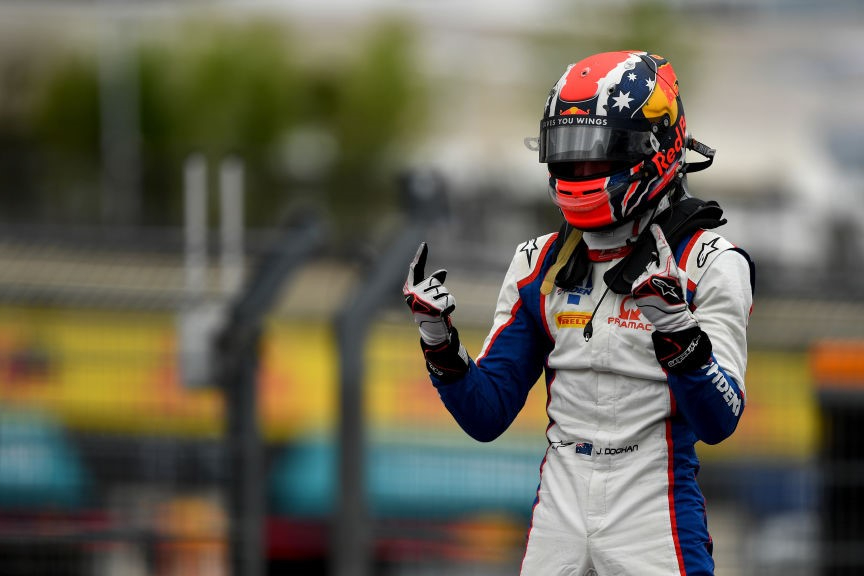 Trident’s Jack Doohan admitted that he questioned whether he was “just wasting time” in motorsport before taking his maiden FIA Formula 3 Championship win at Paul Ricard.

Doohan won the third race of the weekend on the Sunday of the French Grand Prix in wet conditions, charging up the pack from fifth in the early stages to overhaul Prema’s Dennis Hauger – another Red Bull-aligned driver – for the win.

It was Doohan’s first series win and ended a losing streak going back to last February, when he won all three races of an Asian Formula 3 round at Sepang. After that he had a pointless season in FIA F3 which lost him his Red Bull junior status.

“It [the win] means everything,” Doohan said at Paul Ricard.

“I haven’t had a win in over a year so very happy to be able to take this win, and I’m just very thankful for the opportunity that Trident gave me to race with them this year.

“Last year was very, very tough. No points at all, which took a big toll on my mental side of things. The confidence and the fact if I did have talent or not, if I was just wasting time.

“And also it’s a hefty amount of money to do this and a huge sacrifice. I’m very thankful for everyone, my parents, the team, my trainer, for giving me this opportunity and as well my engineer, he’s the genius and got that set-up just perfect for that race.”

The son of motorcycle racing legend Mick Doohan then expanded on how the race itself went.

“We had to start [tyres] saving quite early, because the rain stopped, and these wet tyres overheat really easy. And I could see Dennis started to struggle a lot in the mid-race.

“Once I got past Frederik Vesti, I pulled away from him and could see I was catching Dennis.

“But it was the last seven to nine laps to go I was just managing, but still catching Dennis. So that’s when I knew that if I push, I could overtake.

“Then, once I overtook him, he started to have pace again, which I did not expect and that kind of caught me out. All I was thinking is like: crap, he was saving and that was all part of his plan. I was going to get past, and he was going to come back.

“He was really strong in the chicane, gaining at least three or four car lengths in there. And I thought that maybe that I’d lost the win. But I just stayed clean, tried not to stress the tyres too much.”

Late in the race, Doohan has a moment that almost handed the leas back to Hauger.