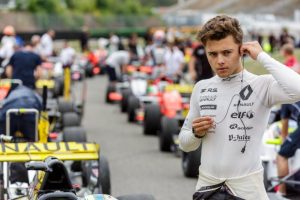 Polesitter Fewtrell made an excellent getaway and resisted any pressure Josef Kaufmann Racing?s Yifei Ye could throw at him throughout the race.

Fewtrell also aced the restart following a safety car period caused by the JD Motorsport-entered car driven by Najiy Razak hit the wall on the second lap. At the end of the 19 lap race the top two were split by 0.732 seconds, with Fewtrell holding on despite a flatspotted tyre, and now heads Ye by 10.5 points in the standings.

Arden’s Oscar Piastri equalled his best result of the season with third, some four seconds behind winner Fewtrell, after opening out a gap to fourth-placed Logan Sargeant.

Former series leader Lundgaard ruined his race on the opening lap, severely locking up a tyre into the hairpin, and running very wide. He retired from the race as a result.

Thomas Maxwell finished in fifth place, ahead of Alex Peroni. MP Motorsport driver Peroni methodically worked his way through the field after starting outside of the top 10.

Tech 1?s Neil Verhagen finished in seventh, taking his first points since the Red Bull Ring. He finished ahead of Alexander Smolyar and Raul Guzman.

Clement Novalak was denied a first point of the season by Charles Milesi on the final lap after a thrilling race-long battle between the pair. Milesi was running well early in the race, before running onto the grass and having to fight his way back up. Victor Martins started third, but retired early on after damaging his front wing.

The battle for the Northern European Cup title was decided in Doureid Ghattas’s favour after the German took his fifth class win of the season. The Anders Motorsport driver was well clear of his opposition, with title rival Gabriel Gandulia of R-ace GP finishing the race third behind new ScoRace Team signing Phil Hill. Second place in the standings is still up for grabs in the final race.