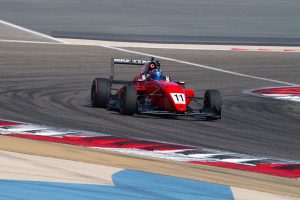 Brazilian Felipe Drugovich won the first race of the 2017-18 MRF Challenge season in Bahrain after heartbreak for poleman Rinus VeeKay.

The pair shared the front row, and Drugovich took the lead partway through the first lap. On the second lap VeeKay got back past, and asserted himself in the lead with several fastest laps.

However all hopes of victory disappeared when his car broke down, handing victory to Euroformula Open race-winner Drugovich.

Presley Martono, who has endured a difficult season in the Formula Renault 2.0 Eurocup after winning the 2016-17 Formula 4 South East Asia title, finished second, with Dylan Young taking third after a rapid start.

Alex Karkosik finished fourth, but spent the early part of the race in sixth after a slow start, a hallmark of his EF Open season.