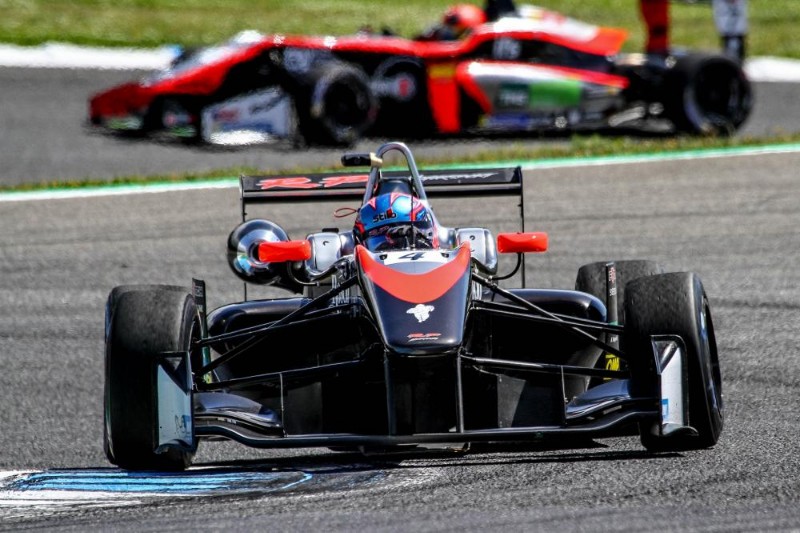 Felipe Drugovich took a dominant pole for the opening race of the Euroformula Open season at Estoril, laying down a marker for his 2018 title challenge.

Drugovich made his debut at the end of the last season, standing in for champion Harrison Scott at RP Motorsport, and took a win and a pole. He has remained at RP for this season, in which he hopes to succeed Scott as champion.

The Brazilian set a marker in the first runs, going quicker than anyone by over half a second. This gap was reduced when the cars returned to track, but he responded by bettering his own time twice to take his second pole in three attempts.

Carlin’s Matheus Iorio set a late lap to steal second, four tenths behind Drugovich, with GP3 convert Marcos Siebert ending up third for Campos, and as the best ‘rookie’.

Winter Series winner Bent Viscaal set a late lap to go fourth for Teo Martin Motorsport, but six tenths off expected title rival Drugovich was less than what was expected of the Dutchman. He could at least take solace in being the top driver in the true rookie classification.

Drugovich’s team-mate Guilherme Samaia set the pace at the start of qualifying, and eventually lined up in fifth, just ahead of second Carlin man Cameron Das.

Returnees Jannes Fittje and Petru Florescu were a disappointing seventh and eighth for Drivex School and Fortec Motorsports respectively, with their team-mates Lukas Dunner and Calan Williams completing the top 10.

Alex Karkosik was as high as third at one point, but sank to 11th on his return to RP Motorsport.

Formula Renault Northern European Cup champion Michael Benyahia was the second slowest driver in the field in 15th, only ahead of fellow FR2.0 graduate Moritz Muller-Crepon.

Max Fewtrell makes it a double pole at Eurocup opener