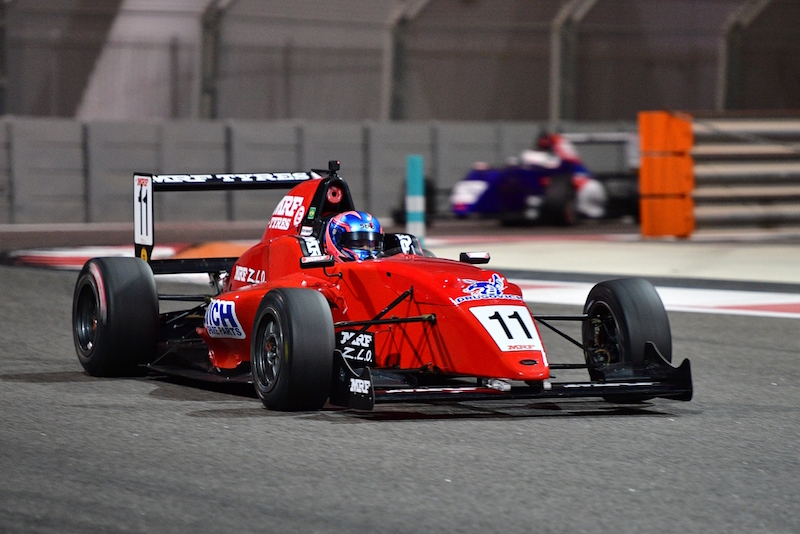 Felipe Drugovich dominated the MRF Challenge round in Abu Dhabi, winning all four races and moving clear in the title race.

He extended his championship lead by 68 points, meaning he could wrap up the title in the first Chennai race in February.

Drugovich started his weekend with pole position, then cruised to victory in the first race, despite two safety cars.

Title rival Rinus VeeKay triggered the first safety car period with contact, after a crash in qualifying left him starting down the order.

On the first flying lap after the restart, Drugovich put 3.5 seconds between himself and Presley Martono, before Michelangelo Amendola stopped to cause the second safety car and a single-lap dash to the flag.

Drugovich was once again in control, putting two seconds between himself and Martono before the end of the lap.

Julien Falchero was third, ahead of Louis Gachot, Alex Karkosik and Danial Frost.

The reversed-grid second race was also interrupted by a safety car, with Drugovich leading the pack having moved up from his sixth place grid spot into the lead.

A crash between Frost, who had started from pole, and Gachot was the cause of the safety car, and promoted Falchero to the lead before he was passed by Drugovich.

Drugovich took an easy sixth win of the season, with Falchero finishing second and Alex Karkosik third, despite a customary poor start for the Polish driver.

Martono finished fourth, ahead of Gachot, Nazim Azman and VeeKay. Gachot was then given a 20 second penalty for the crash with Frost, and was demoted to 16th.

The third race was the first to go safety car free, and as a result Drugovich won by a monumental 13.478 seconds from Falchero.

Rinus VeeKay finished third from 15th on the grid, and was getting close to Falchero at the end of the race. Amendola finished fourth, leading Manuel Maldonado and Harri Jones. Azman had been between the latter two, but was penalised for rejoining the track dangerously and gaining an advantage.

Another to lose a good result was Martono, who had initially been in second but clashed with Karkosik while battling for the position. He dropped a few places, before pitting for damage and finishing a lap down. Karkosik failed to finish the race.

Drugovich started from pole for the final race of the weekend, having taken the fastest lap across the previous three races, and had another unrivalled run to victory.

This time VeeKay finished second, his best result of the weekend, but was over five seconds down on Drugovich by the end of the race.

Falchero was a further four seconds back in third, just ahead of Martono, with the pair having now established themselves as Drugovich’s closest rivals in the championship.

Karkosik was a lonely fifth, with Robert Megennis leading a train of cars from sixth down to 11th. The American was then penalised after the race for exceeding track limits, handing Frost sixth, and promoting Dylan Young, Amendola, Jones and Henning Enqvist to the remaining points positions.