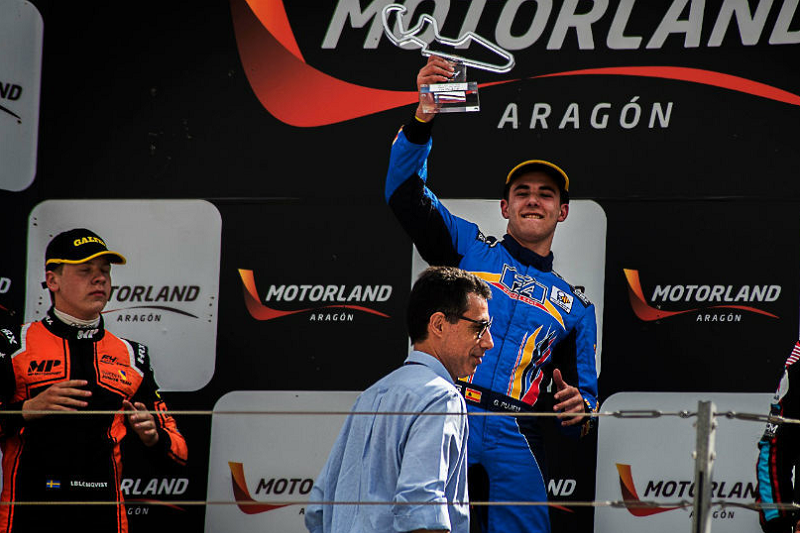 Driving for the FA Racing Team run by Fernando Alonso’s?karting mentor?Marco Genis, Pujeu was beaten to all three poles by MP Motorsport pair Isaac Blomqvist and Amaury Cordeel, but was the stronger driver in the races.

Blomqvist finished second on each occasion, but was usually three or four seconds off Pujeu.

In the first race Blomqvist came under challenge from Drivex School’s Nazim Azman, the only other championship returnee.

The Malaysian was just 0.073 seconds off Blomqvist come the chequered flag, and added another podium in the final race to put himself third in the standings.

Cordeel should’ve been amongst Blomqvist and Azman, but left Aragon with a singular podium in the shorter second race, a sixth place and a disqualification. The Frenchman was leading the final race of the weekend until being handed a penalty with three laps to go, dropping him to sixth.

As in the first two events of the season, Yuki Tsunoda was the man to beat in the Japanese F4 championship, this time on the full Grand Prix layout at Suzuka.

The Honda Formula Dream Project driver took his 2018 pole tally to six out of six in qualifying, a stat that not only breaks a record in its length, but also makes him the first driver to take 10 overall poles in the championship.

Tsunoda made a predictably strong start from pole, while team-mate Teppei Natori nipped past TOM’S driver Kazuto Kotaka for second.

As Tsunoda drove into the distance, Natori and Kotaka fought over second, with some hairy moments occasionally occurring. Natori looked to have the position though until the penultimate corner, where he got loose at the exit and ran over the grass, conceding the runner-up spot to Kotaka.

A race-long tussle for fourth between championship returnee?Ayumu Iwasa, Ren Sato and Kohta Kawaai ended in Sato’s favour. The HDFP driver had sat in Iwasa’s mirrors for most of the race, unable to find a way through until Iwasa went wide at Turn 1 with four laps to go.

The Rn-sports driver slipped behind Kawaai too, but sixth place was still his best result in F4.

Rather surprisingly Kotaka beat Tsunoda into the first corner at the start of the second race, with the championship leader then coming under pressure from Takuya Otaki, another of his team-mates.

At the end of the second lap Tsunoda went for the lead, and hassled Kotaka enough to get alongside down the main straight. Otaki made it three-wide, but was the first to concede into Turn 1, as Kotaka and Tsunoda continued to fight for position.

The pair ran wheel-to-wheel through the first three corners, with Tsunoda taking the lead at Turn 4.

A monumental crash at Turn 1, with one car being launched over the barriers, meant the race went under safety car conditions and prevented Tsunoda from pulling away.

Thankfully all three drivers involved in the crash were able to walk away, but the race finished behind the safety car. Natori and Sato completed the top five.

Tsunoda now has a 43 point lead in the standings over Natori, almost equivalent to two race wins.