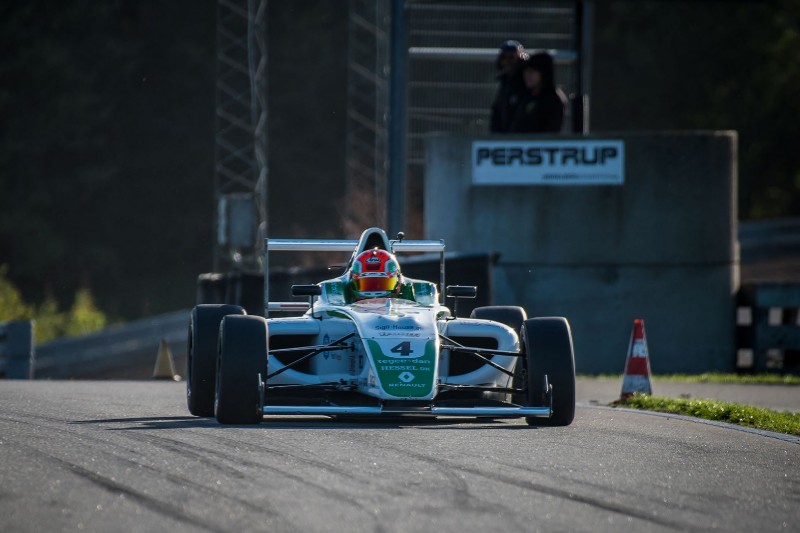 Casper Tobias Hansen won the Danish Formula 4 title at Ring Djursland with a round to spare, taking his ninth and 10th wins in the process.

The Team FSP driver started the weekend with fourth place in qualifying, behind Formula 5 driver Martin Harritz, 14-year-old Malthe Jakobsen and Casper Pilgaard. Hansen and Jakobsen’s team-mate Aske Nygaard Bramming was unable to take part due to a scary high-speed crash in which his brakes failed and he was pitched into a roll. The car was repaired in time for the first race.

Jakobsen made a poor start to the race, with Pilgaard moving into the lead. Hansen hounded him, and it took an exemplary pass for him to eventually take the lead. Once ahead they stayed close, with them eventually crossing the line 1.4 seconds apart.

Third place for Jakobsen matched his best finish of the season, ahead of Valdemar Eriksen and Jonas Lindhard Nielsen. Bramming did well in his rebuilt car to finish sixth, unshaken from his earlier crash.

The race was most noticeable for the actions of APEX Racing’s Mikkel Grundtvig.?He had to start from the back, and was then handed a penalty which he served too late, receiving a black flag that he then ignored for four laps. He was disqualified from the race and excluded from the rest of the meeting as a result.

Mads Hoe won the F5 classification in seventh, and took overall victory in the second race with Harritz just behind. Pilgaard finished third, ahead of Eriksen, Bramming and Hansen.

Hansen secured the title with victory in the final race, with Pilgaard and Hoe once again appearing on the podium. Fourth place for Jakobsen also secured him the F4 rookie crown.

F4 North European Zone and Formula Academy Finland combined once again at Alastaro, where Konsta Lappalainen was the top scorer. He was no faster than Michael Belov though, who ran him extremely close in the constantly changing conditions for the first race victory.

Lappalainen struck back in the third race, this time by an even closer margin of 0.272s. With the heavier weighting of points on the first and third races, Lappalainen extended his NEZ lead, but with only the first two races counting towards the Finnish standings, and for the same amount of points, it meant Belov moved past Salmenautio into the championship lead.

An awful weekend for Nazim Azman and a great one for MP Motosport team-mate Amaury Cordeel meant the Spanish F4 lead changed hands once again at Jerez.

Javier Gonzalez closed to within a point of Azman in the sole race at Barcelona two weeks ago, but numerous problems and a lack of pace meant he wasn’t a factor at Jerez. Guillem Pujeu dominated the first race for FA Racing, with poleman Cordeel coming home in second.

The positions were reversed for the next two races, with Gonzalez failing to make it into the top five and Azman only doing so in the final race. Patrick Schott and Killian Meyer completed the podium in races two and three.

The points swing as a result of the weekend means Cordeel now leads Pujeu by 16 points, with Azman and Gonzalez still a point apart in third and fourth.