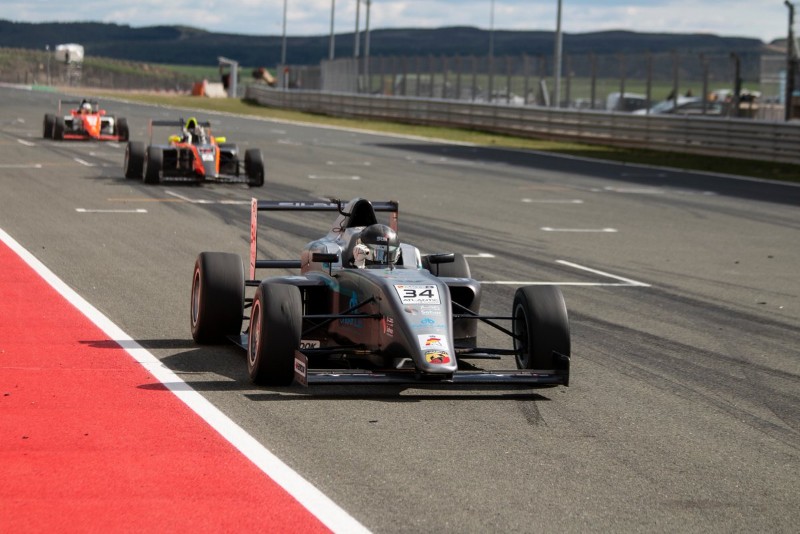 Colapinto – ?racing under the patronage of Fernando Alonso, started all three races from pole and won the season opener by 5.340 seconds from Al Habsi.

Matteo Nannini tried to overtake Al Habsi for second at one point, but ran wide, dropping to fifth. Glenn van Berlo profited from the mistake to claim third.

Colapinto controlled from the front again in the second encounter, but was denied victory. Fellow front-row starter Kilian Meyer was overtaken by Nannini and ban Berlo in the early stages before a high speed off into the gravel ended his race on lap five.

Shortly afterwards the race was red flagged when Ivan Nosov lost control under braking before colliding at speed with the hapless Carles Martinez. Both drivers avoided injury.

The race resumed with three minutes remaining. Colapinto finishing first on the road, ahead of Nannini and van Berlo. However all three drivers – as well as several others – were handed 25-second penalties for red flag infringements. This resulted in Belen Garcia inheriting the win, Nerea Marti second place, with Colapinto relegated to third.

In race three, Al Habsi outdragged Colapinto off the line to take the lead. Colapinto then had to pit for a new rear wing after being hit from behind and finished down in seventh. Al Habsi survived a safety car to claim victory for the debuting Xcel Motorsport team, and was?followed home by Rached Ghanem and Tijmen Van Der Helm.

Despite dropping down to fourth – having started from second – the Frenchman quickly took the lead in race one and convincingly beat Lucca Allen and Malthe Jakobsen to victory. Polemqn Emil Skaras made contact with Jakobsen early in the race, receiving a 30-second penalty for the incident which dropped him to eighth.

Race two started dry, with Iraqi-Jordanian Ali Akabi initially leading, but the arrival of rain led to him being demoted by Alister Yoong. The race was then red flagged, and both Akabi and Yoong were handed penalties for infringements at the start of the race. Skaras was handed the win, ahead of Allen and Elias Seppanen.

Jakobsen led early in the third race, but very quickly had David on his tail and was powerless in keeping the Frenchman behind. He did hold on to second though, with Allen a distant third.?It was another disappointing race for Yoong and Akabi, who collided early on.

David dominated race four, with a collision between Jakobsen and Skaras leading it to being red flagged. When it restarted Allen and Seppanen asserted themselves in second and third.