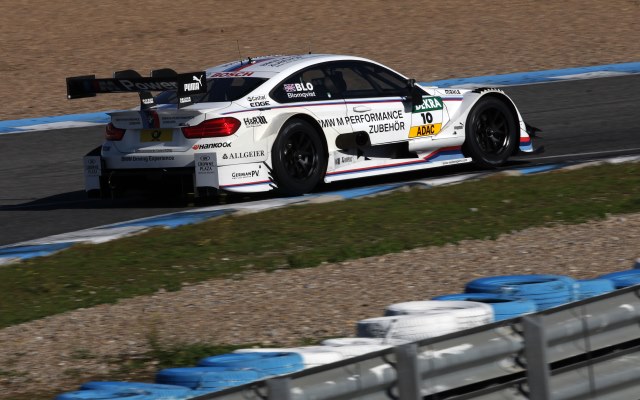 The 21-year-old Briton was one of several young drivers who tested with the German manufacturer in December, including Richie Stanaway, Robin Frijns, Alex Lynn and Sam Bird.

BMW won the DTM crown last year with Marco Wittmann, who was European F3 runner-up in 2010 and 2011.

Son of Swedish 1984 World Rally Champion Stig, born in Britain and raised in New Zealand, Blomqvist’s single-seater career began in 2009 in Formula Renault 2.0 Sweden before becoming the youngest ever winner of the British series in 2010 at the age of 16. At the end of that year he contested his one previous race in a BMW – the Formula BMW race at the Macau Grand Prix, where he finished third.

In 2011 he took part in German F3, winning a race and finishing sixth in a season curtailed with injury. As well as taking five more wins in that series in 2012, he finished seventh in European F3 in both of the following two seasons driving for the smaller ma-con and EuroInternational teams.

For 2014 he landed a seat with top team Carlin and claimed six wins to beat Max Verstappen to second place in the points.

A step up to FR3.5 with Carlin had been on the cards for Blomqvist this year prior to his DTM deal.

?I cannot put into words just how delighted I am to have been signed up by BMW Motorsport,? said Blomqvist. ?After the test in Spain, I was able to envisage just how it would feel to be a BMW works driver and regularly push myself to the limit in the BMW M4 DTM.

“Now I have the opportunity to do just that ? and it?s just fantastic. I?m really proud to be a member of the BMW Motorsport family now. As well as the exciting sporting prospects, I was also immediately impressed by the great team spirit and the way I was made to feel so welcome at the test.?

BMW Motorsport Director Jens Marquardt commented: ?We are delighted to welcome another very promising youngster into our ranks, in the form of Tom Blomqvist.

“Tom was extremely impressive at the test in Jerez, and comes to us with a wealth of experience from Formula 3. I am confident he has everything he needs to find his feet quickly in the DTM. With his likeable personality he is definitely a great asset to our line-up. We have done well with our choice of rookies so far. We will support Tom to the best of our ability to be successful from the word go in 2015.?