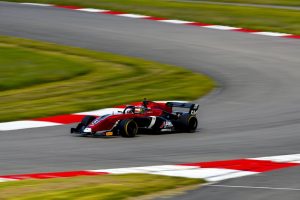 Abel Motorsports, which ran Kyle Kirkwood to the inaugural Formula 3 Americas title this year, will take over Cape Motorsports’ Pro Mazda entry for 2019, and will likely field Kirkwood.

Cape Motorsports has won the last two USF2000 driver titles with Oliver Askew and Kirkwood, and won the teams’ title for five seasons in a row prior to that. It entered Pro Mazda in 2014, initially in partnership with sportscar team Wayne Taylor Racing, and has won 16 races in five seasons. It has now sold on its assets and entry to Abel Motorsports.

Although it has only existed for two years, Abel Motorsports has considerable team experience, having been set up with the assistance of 1999 IndyCar rookie of the year Scott Harrington. The Canadian had coached Bill Abel, and they entered a car in United States Formula 4 last year for his Bill’s teenage son Jacob.

That programme lasted one-and-a-half seasons, and the team expanded into USF2000 and F3 Americas this year. Abel drove in both, and was partnered by Kirkwood in the latter. The team won 15 of the 17 races with Kirkwood, who simultaneously won the USF2000 title with Cape Motorsports, winning a scholarship to Pro Mazda.

Abel will drive one of the team’s cars, with team boss Abel Sr targeting a second driver, believed to be Kirkwood.

?We have some strong options for our second car,? he said.

?We?ve had inquiries from some terrific young drivers, and we?re still taking calls. Our cars were among the strongest in the paddock in 2018.”

It is unclear what will happen to the team’s F3 Americas cars, although there is nothing ruling out Abel and Kirkwood from doing a second season.

The 19-year-old has a ticket to the Mazda Road to Indy Shootout off the back of his Pacific F2000 title, a series he finished fifth in last year. It runs F2000 machinery similar to the previous generation of USF2000 cars. He also won this year’s SCCA Formula Continental Runoff in a Formula Ford 1600 car.

Active pastor Will Marotti has worked with IndyCar team Schmidt Peterson Motorsports on several occasions, and will now run a car of his own in one of IndyCar’s feeder series.