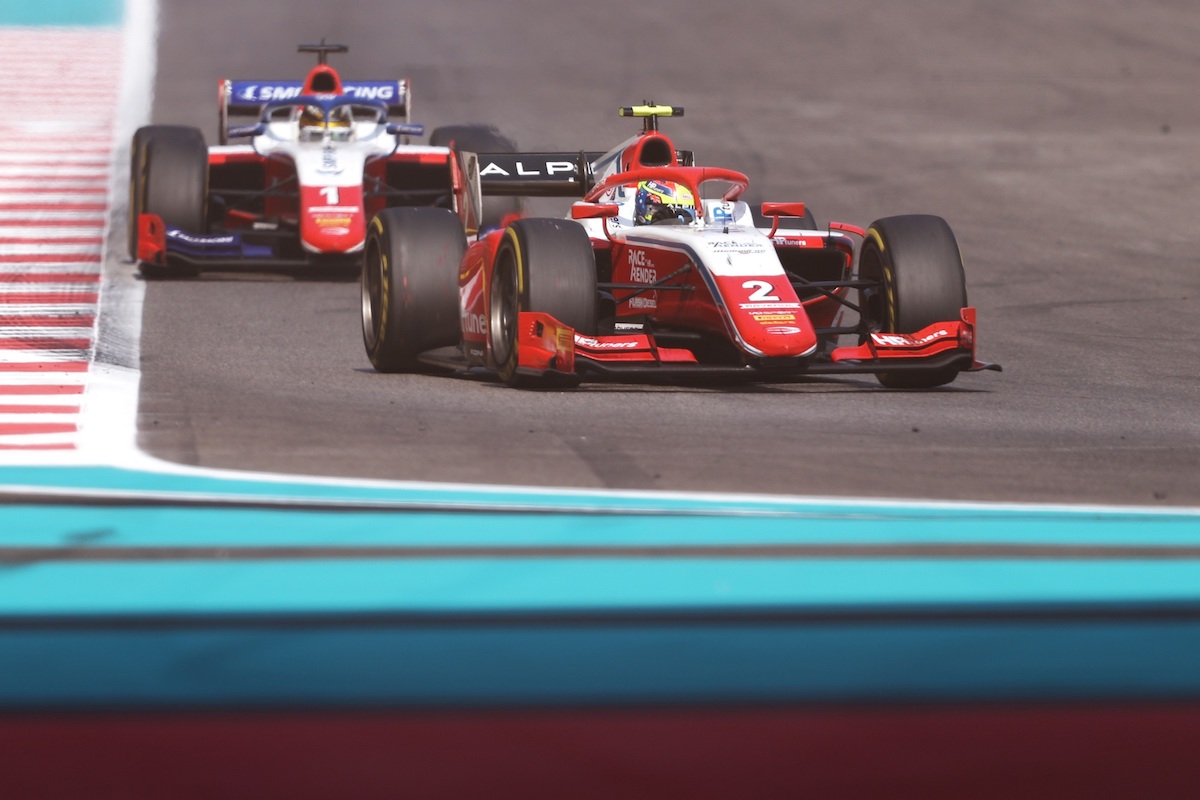 Champion Oscar Piastri claimed another convincing victory in his Formula 2 farewell in what was a relatively quiet feature race to end the season in Abu Dhabi.

Virtuosi Racing’s Guanyu Zhou finished the race in second place, but that wasn’t enough to take runner-up position in the championship away from Prema’s Robert Shwartzman. Zhou’s team mate Felipe Drugovich completed the podium, allowing the team to claim second place in the final standings.

The action started before the lights went out. Charouz Racing System’s Guilherme Samaia made contact with new champion Oscar Piastri as they left the pit-lane to go to the grid.

When the race started there was action straightaway. Zhou passed MP Motorsport’s Jack Doohan for second place at turn six and Hitech GP’s Liam Lawson, who had had a good start from seventh on the grid, passed Shwartzman for for third with late braking in the same corner.

Doohan – who started on medium tyres rather than supersoft – and Shwartzman wouldn’t give up easily, and tried to regain their places on the way down to turn nine. The battle ended up with Doohan and Lawson running wide at the exit of the new banked corner and losing control of their cars at turn 10 as they rejoined the track alongside Zhou and Shwartzman respectively. Lawson spun and could avoid the barrier but Doohan couldn’t and the safety car was deployed.

Further down in the order, Hitech’s Juri Vips had touched the back of ART Grand Prix’s Christian Lundgaard in the chicane 6-7, spinning the Dane round. The Estonian was handed a five-second time penalty for the incident.

The race resumed at the end of lap four, and first pit-stops took place at the end of lap six. Lawson was the first to come in to change his badly damaged tyres. Shwartzman pitted two laps later, and that prompted Piastri and Zhou into the pit-lane the following lap to avoid the undercut.

After that, little happened until those on the alternate strategy came in. DAMS’ Marcus Armstrong was the first one to do so on lap 24 of 33. His fresh soft tyres allowed him to overtake first Campos Racing’s Ralph Boschung and then Lawson – whose car stopped near the end – to gain seventh place.

ART GP’s Theo Pourchaire and Drugovich, who had been first and second respectively since Piastri pitted, rejoined the track on fourth and fifth place after taking their pit-stops. The Brazilian passed the Frenchman, and both passed Shwartzman with two laps to go to finish the last race of the season in third and fourth respectively.