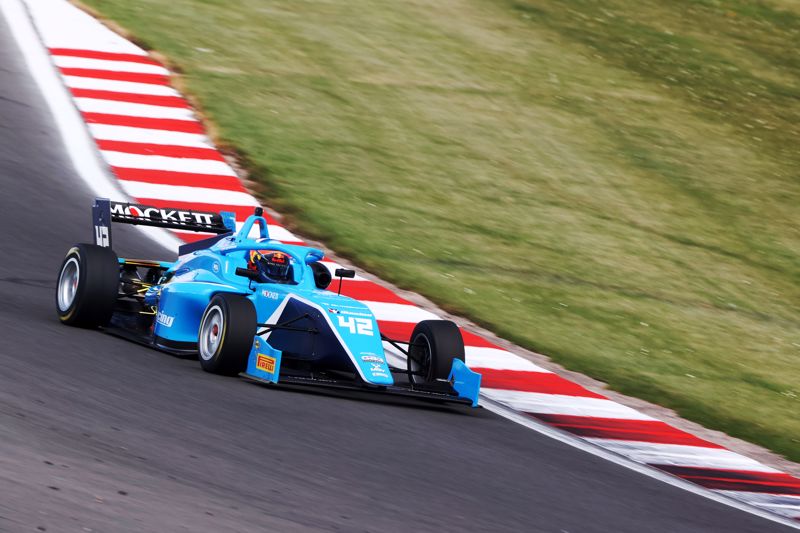 The American was 0.444 seconds faster than JHR Developments’ Matthew Rees, with Carlin’s Roberto Faria and Arden’s Alex Connor also within half a second of the pace – all recording their best laps in the final session. Connor’s team-mate Nico Christodolou was fifth ahead of his GB3 debut.

Esterson led the opening 35-minute session on Thursday with an early 1m24.215s lap. But Hitech GP’s Luke Browning recorded a late effort of 1m23.989s to top the timesheet by 0.024s from Faria.

Connor briefly went fastest late in session two, but Browning almost straight after set a 1m23.622s to end the morning on top. That lap was not beaten in the afternoon session, topped by Fortec Motorsports’s Joel Granfors, which was stopped twice due to a spin for Elite Motorsport’s James Hedley and a car issue for Douglas’s Marcos Flack.

Faria beat Browning’s benchmark in Friday morning’s 40-minute session, before Esterson and Elite’s Tom Lebbon went quicker still. Browning posted a 1m23.230s on his penultimate lap to be top again, but then crashed at Old Hairpin in the afternoon, with resulting barrier repairs curtailing session two, which was headed by Granfors.

Esterson dominated the final session, shaving 0.3s off Browning’s earlier pace, and then found a further 0.2s to end on a 1m22.705s. Only four of the 22 drivers failed to improve.

Walker posted a 1m31.189s to be 0.644s clear of Kevin Mills Racing’s Jarrod Waberski in the morning session. He then improved to 1m30.341s in session two before lapping 0.140s shy of his best in the final session.

Valour Racing showed impressive pace in session two in its first appearance in single-seaters, with Danny Harrison only pipped to the fastest time by Walker with five minutes remaining. His 1m30.477s lap put him second for the day, ahead of Waberski.

Waberski caused an early red flag in Friday’s opening session by going in the gravel. Once action resumed, Walker traded fastest laps with Hillspeed’s Megan Gilkes, with times significantly faster than on Thursday.

But it was Walker’s team-mate Jack Sherwood who topped proceedings with a 1m29.698s, before he caused the session to end prematurely by sliding into the gravel at MacLeans.

GBR’s Chloe Grant was another to find the Macleans gravel, causing a brief stoppage in the first of two afternoon sessions. Fortec Motorsports’ Nikolas Taylor bettered Sherwood’s effort by 0.015s, improving further to a 1m29.592s on his final lap to be 0.5s clear of Walker in session two.

He also quickest in session three with a test-topping time of 1m29.344s, with Walker also finding more time to end up 0.085s behind. Hillspeed’s Max Marzorati and Waberski also improved, resulting in the top four being separated by 0.288s. Sherwood and Gilkes were fifth and sixth, having been the only two to not lap quicker in the afternoon.