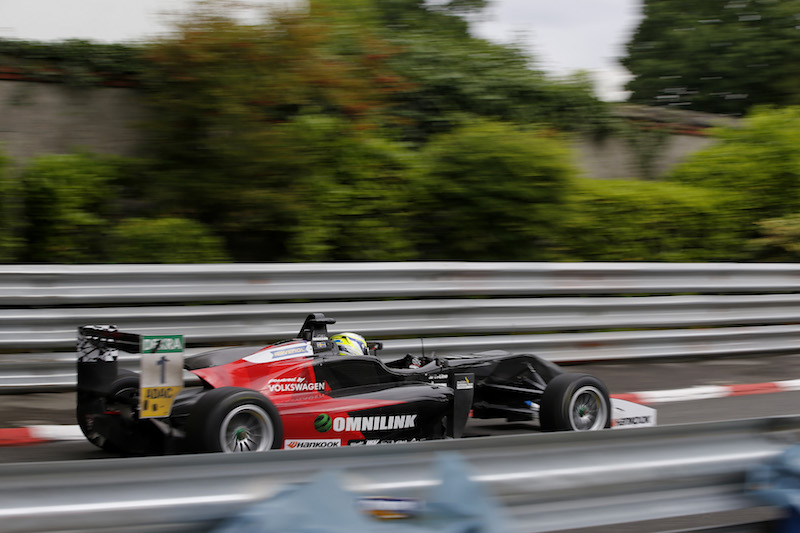 Joel Eriksson held off Lando Norris to win a dramatic?first Formula 3 European Championship of the Pau Grand Prix weekend, which included Callum Ilott crashing?away the lead on lap one.

Ilott made a good start from pole position to hold the lead, but at the Foch chicane he hit the tyre barrier on the exit, breaking the front-left suspension on his Prema-run car.

Coming around him to take the lead was Eriksson after the Swede got past front-row starting Norris on the outside line around Gare corner and up the hill to Pont Oscar.

Norris cut the gap to Eriksson from 1.4 seconds to just half a second by the end of lap five when a full-course yellow was followed by a safety car to retrieve the car of Guan Yu Zhou, who appeared to have copied team-mate Ilott in crashing at Foch.

With 15 of the 35 minutes remaining, Eriksson made a?good restart to build a second’s advantage, but Norris cut this once more in half within four?laps.

The safety car was then needed again after?the cars sitting?third and fourth of Joey Mawson and Jake Dennis hit the barriers in synchronised fashion around Parc Beaumont.

Both had passed a slow-away Maximilian Gunther at the start, and then went side-by-side at the first restart, with Dennis edging ahead on the outside of Mawson and Gare before they banged wheels, allowing the Australian rookie to stay ahead.

With seven-minutes remaining, amid?reports of moisture on the track, Jake Hughes slid into the Foch barriers out of sixth place, before Mawson and Dennis then crashed at the preceding?corner on the following lap.

As Gunther tried to find a way past a slowed Dennis at Foch, the pair made significant contact as the Briton attempted to pull off to the outside line, which sent Gunther sideways, but the German somehow managed to continue.

The race restarted in time for two more laps of racing, in which Eriksson kept Norris at bay to win by 0.243 seconds.

The win, which comes in a week where Eriksson admitted he still needed to prove himself on street circuits, ensures he has now won at each of the first three rounds of the season and extends his standings lead?over Norris from one to eight points.

Gunther held on for third with his likely-damaged Prema car ahead of a best-ever fourth?for Nikita Mazepin.

Ralf Aron took fifth in front of Harrison Newey, Pedro Piquet, Mick Schumacher, Ferdinand Habsburg and Jehan Daruvala, although the stewards later switched Schumacher and Habsburg around after the former was found to have passed the latter under yellow flags.