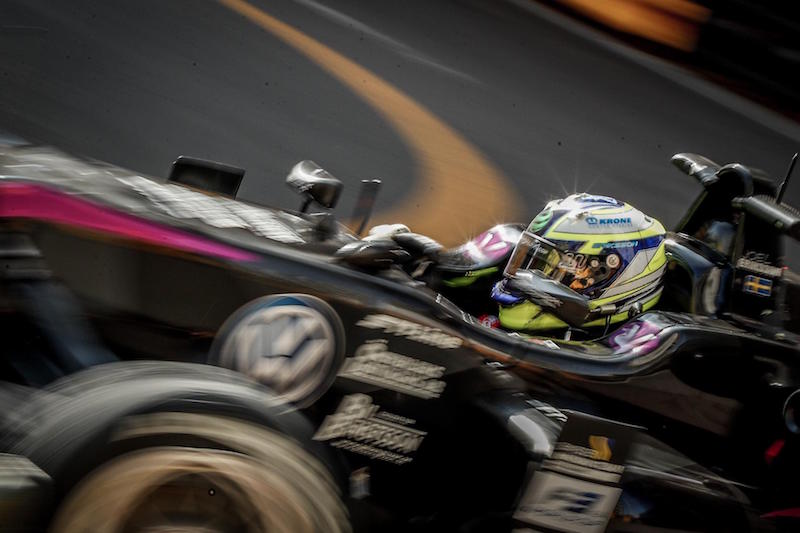 It was interloper Dan Ticktum that was first to beat Norris’ benchmark from first qualifying of 2m11.570s, but Norris shattered that with a stunning 2m10.744s with 17 minutes left on the clock.

With five minutes left on the clock, Guan Yu Zhou triggered a third red flag of the session, and Norris opted to remain in the pits after the restart.

Inside the final 30 seconds, just as Callum Ilott leapt up from fifth place to third, Macau veteran Yuhi Sekiguchi crashed right behind him at R-Bend to bring an early end to the session and confirm Eriksson as pole-sitter.

Ferdinand Habsburg also stayed in the pits at the final restart having damaged his car’s suspension shortly beforehand, but he still managed to hold on to fifth position behind Gunther.

Ticktum had been on a personal best lap when the penultimate stoppage came, but his early flyer was good enough for sixth position.

Mick Schumacher was an impressive seventh as the top Macau rookie, in front of Sekiguchi.

Sergio Sette Camara repeated his Fisherman’s crash from first qualifying during the middle of the session, but he still ended the session with ninth place, and Zhou took 10th.

The first red flag was also caused by a driver who came unstuck in first qualifying, as Jehan Daruvala crashed in the Solitude Esses.