Ericsson beats rain to take second pole of 2013 at Silverstone 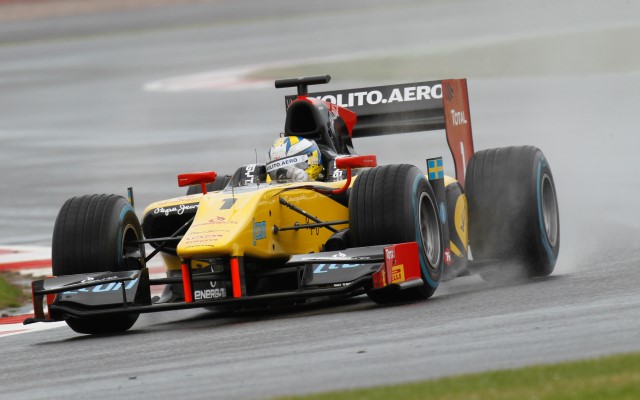 Marcus Ericsson secured his second pole position of the GP2 season at Silverstone as typically British weather rendered the second half of the session worthless.

The DAMS driver claimed top spot around ten minutes into the half-hour session, and still held P1 when the session reached its half-way point. It was then that earlier spots of rain developed into a heavier drizzle, making the track considerably slippier. Some drivers made tentative visits to the track, but times could not be improved.

Ericsson’s pole doubles his points haul from four to eight points, with all having come for topping qualifying.

Sam Bird had been quickest before Ericsson displaced him, and the Monaco feature race winner will line-up alongside the Swede on the front row of the grid for his home round. Felipe Nasr will start third, setting him up to extend his run of consistency, having finished all eight races so far this year between second and fourth position.

Next will be championship leader Stefano Coletti, who recovered from propping up the timesheets in practice to take fifth, ahead of fellow Monegasque Stephane Richelmi. Practice pace-setter and 2012 pole-sitter Fabio Leimer was forced to make do with sixth, while?Rio Haryanto did well to take seventh for Addax.

Mitch Evans, a double podium finisher last time out in Monaco, qualified eighth, while the top ten will be rounded out by Tom Dillmann and James Calado, the conditions not allowing the latter to significantly improve his lacklustre qualifying record this year.

Robin Frijns was quickest out the blocks at the start of the session but slipped back to 16th. Alexander Rossi and Jolyon Palmer were also caught out and will share the tenth row of the grid. MP Motorsport pair Adrian Quaife-Hobbs and Daniel De Jong spun exiting Stowe and Copse respectively and will line up 24th and 26th, the latter after he impressed in the wet practice with the fifth best time.