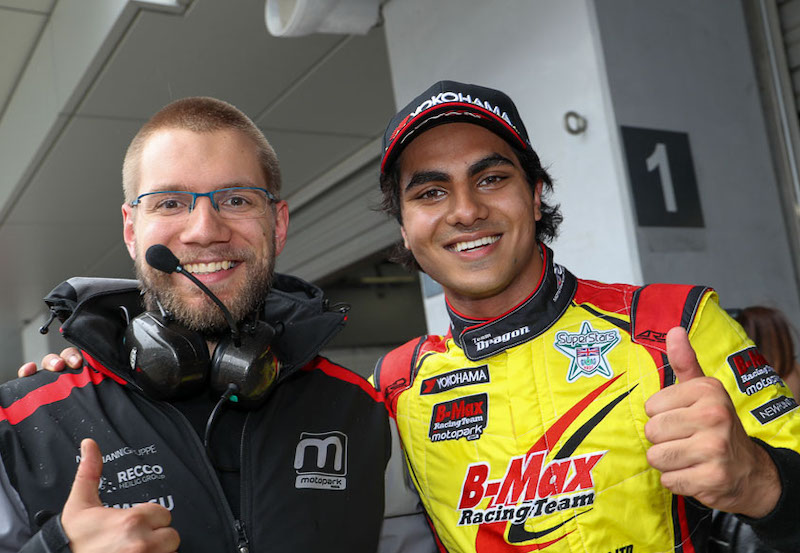 BRDC British Formula 3 champion Enaam Ahmed will make a return to Euroformula Open at Silverstone with Motopark, having last competed in the championship three years ago.

Ahmed contested a part-time campaign in EF Open with DAV Racing in 2016, his first of two seasons in BRDC British F3.In 2017 he was British F3 champion with Carlin, earning himself a slot in the final of the Aston Martin Autosport BRDC Award. He won races with Hitech GP in FIA European F3 last year, and is now racing in Japanese F3 with Motopark.

The 19-year-old is replacing championship leader Marino Sato in the German squad, with the Japanese driver racing for Campos Racing in Formula 2 at Monza instead.

For the first half of this season, Krutten raced in the ADAC and Italian F4 championships with Van Amersfoort Racing, but left his drive last month. He now replaces fellow German and Pau Grand Prix poleman Julian Hanses at Motopark for the rest of the season.

In addition to Ahmed, British F3 racer Manuel Maldonado and Neil Verhagen are also set to make an appearance at Silverstone.

Maldonado, younger cousin of 2012 Spanish Grand Prix winner Pastor, will bring Fortec Motorsports? line-up up to two cars for the rest of the season alongside Calan Williams, who has separately revealed this week that he will test in the FIA F3 Championship at the end of the year with Jenzer Motorsport.

Verhagen is in line to replace Red Bull junior Jack Doohan at Double R Racing, with the latter focusing on his clashing Asian F3 title campaign with Hitech GP at Shanghai over the weekend. Double R is also believed to be testing another British F3 graduate over the weekend.

One British Formula 3 team returning to the championship is CF Racing, which usually races in the MSV F3 Cup and made its EF Open debut at Spa-Francorchamps this year.

Another BRDC British F3 driver in action elsewhere this weekend is Ayrton Simmons, who will return to Asian F3 this weekend with Pinnacle Motorsport.