Emil Bernstorff switches to Arden in GP3 for 2015 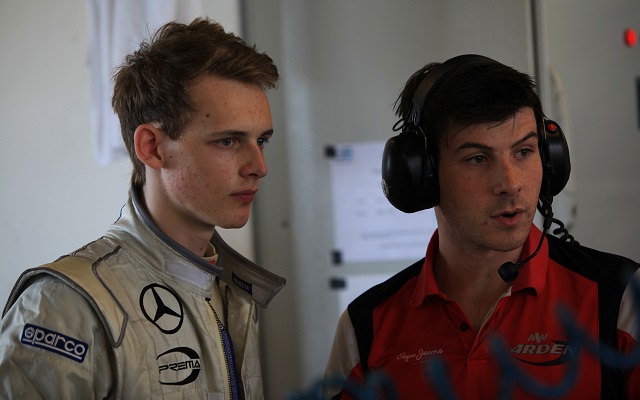 Emil Bernstorff?will race in GP3 again this year, switching to the Arden team.

The?Anglo-Danish driver finished fifth in his rookie campaign with Carlin in 2014.

He claimed a single win in the reverse grid race at the Red Bull Ring, a day after finishing second to team-mate Alex Lynn?in race one.

He went on to take three further podiums before the end of the campaign, at Silverstone, Hockenheim and in Abu Dhabi, and tied on points with fourth-placed?Jimmy Eriksson.

The runner-up in ADAC Formel Masters to Pascal Wehrlein?in 2011, Bernstorff then spent two years in Formula 3, taking tenth in the European championship and then third in the German cup, before moving onto GP3.

At the end of last year he tested in GP2 with Carlin, Rapax and Hilmer, but will remain at the level below.

Bernstorff follows the two drivers that finished ahead of him last year -?Marvin Kirchhofer?and?Eriksson?– by sticking in the series for a second season.

“I am very happy and excited to be racing with Arden this year – a great team with a great history of success,” he said.

“When I tested with them in Abu Dhabi 2013 I immediately liked both the car and the atmosphere within the team. This feeling has grown stronger over the last few weeks with pre-season preparations at the workshop. The clear objective for us this year is to build on the momentum and experience gathered last year and to have a strong run at the title.?

He joins Kevin Ceccon and Alex Bosak at Arden?this year, with pre-seaaon testing beginning at Estoril on Wednesday.

Team boss Garry Horner said: ?We are very pleased to have Emil join us after a strong season last year. He has demonstrated superb progress in this championship and a steady momentum on finishing in the top ten and bringing in the points. We have a great line-up to secure the title this year.?

Pulcini and DAV Racing to continue together in Euroformula Open