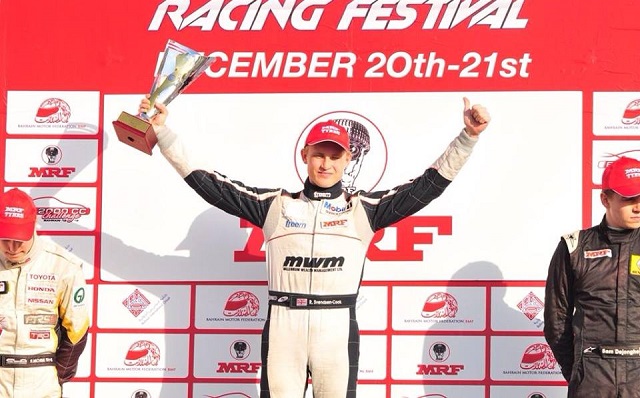 MRF Challenge frontrunners Tio Ellinas and Rupert Svendsen-Cook added to their victory tallies in round three of the series at Sakhir, each winning two of the four races.

Ellinas was quickest in qualifying, but, having lined up on the front row alongside him for race one, it was the Brit who jumped into the lead during the opening lap. From that point on, he kept Ellinas at bay for the race distance, eventually crossing the line in first to pick up his third victory in the championship.

The Cypriot, running in second, came under pressure from Arthur Pic in the closing stages of the race, even letting him through at some point, but wound up taking the spot back with the Frenchman rounding out the podium. Renan Guerra and Sam Dejonghe rounded out the top five.

In race two, reverse-grid poleman Shinya Michimi managed to maintain the lead off the start, but soon found himself challenged by a charging Svendsen-Cook. The Brit briefly took over in the lead early on, but was then tagged out by Michimi when the latter attempted to retake the lead.

The incident between the leaders allowed Ellinas to jump into the lead and the Cypriot controlled the race from that point on. Having finished second, Michimi was then demoted out of the points due to a post-race penalty and, as such, it was Pic who inherited second and Dejonghe who rounded out the podium. Guerra was again fourth, while Harry Tincknell took fifth.

The roles were reversed on Saturday. While it was Svendsen-Cook who started the feature race from pole, Ellinas soon took the lead and wound up comfortably winning the race, while the Brit kept busy holding off the third-placed Pic. Tincknell took fourth, with Dejonghe securing another fifth.

Again, Michimi lined up on reverse-grid pole for the second race of the day and, yet again, Svendsen-Cook soon took over in the lead of the race. This time it went off without a hitch for the Briton, with trouble hitting for his rivals instead – Ellinas had his race undone by a drive-through penalty for jumping the start, while Pic retired after colliding with Guerra.

As Svendsen-Cook took the win, Michimi and Dejonghe picked up the remaining podium positions. Tincknell took fourth, while Ryan Cullen picked up his best finish of the series in fifth.

In the standings, Ellinas leads Pic by 16 points, with Svendsen-Cook a further six behind, with one four-race round remaining.