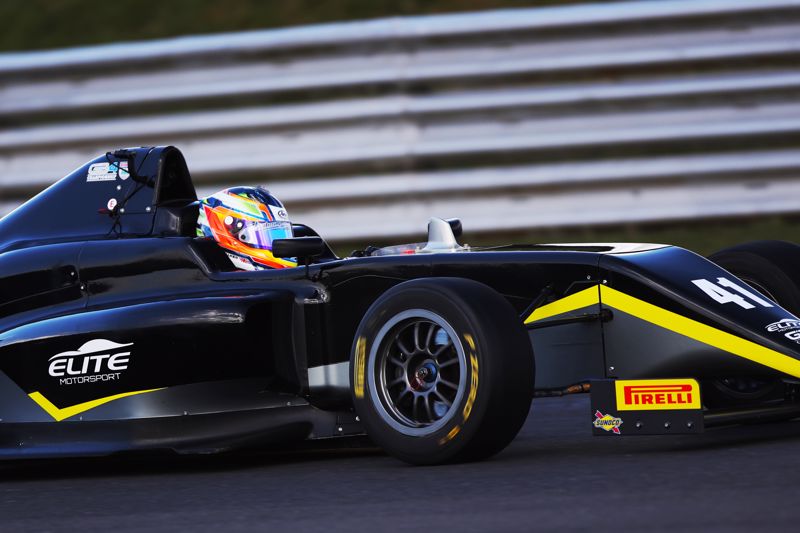 In reversal of Saturday’s race, Walker was able to stroll past poleman Taylor on lap one to take the lead, as Taylor locked up into the first corner. It was then a tightly fought race at the front between Walker and Kevin Mills Racing’s Tom Mills.

Mills repeated his strong race one start, storming from fourth to second over the first two laps althought he was put under pressure from team-mate Jarrod Waberski at the start.

After Taylor’s spin he was able to stay on the tail of Walker, keeping him under pressure by staying in his mirrors. However he overworked his tyres, and couldn’t close the gap down any further than 0.6 seconds, eventually finishing 1.3s behind.

Taylor spun sideways through Brundle on lap two when he had been in second place, but the British-Malaysian driver made an impressive recovery after falling back to 10th. He climbed back up to sixth, passing Jack Sherwood and Megan Gilkes and setting the fastest lap on lap six before recieving a track limits warning.

He closed in on Fortec Motorsports team-mate Elias Adestam in the closing laps, but a moment where he put two tyres on the grass meant Adestam could hold on to fifth place.

Ahead of them was an even closer battle, as Hillspeed’s Max Marzorati attacked Waberski for third late on and got alongside on the last lap. He couldn’t make a pass though, and finished just 0.109s away from the podium.

Walker’s team-mate Sherwood started and finished and seventh, losing an early challenge from Graham Brunton Racing’s Logan Hannah as she stopped on lap one with electrical issues. Her team-mate Chloe Grant moved into eighth as a result, prevailing in a battle with Fortec’s Jessica Edgar.

Hillspeed’s Megan Gilkes was unable to make much progress throughout the race and collecting debris late on meant she fell down the order from the ninth place battle and then retired with radiator damage as a result of striking the debris.

Rossoverde Racing’s Chrisitian Lester, stuggling with a sprained wrist and a lack of pace, completed the top 10 as a result.

GB4 begins at Snetterton with victory for Fortec’s Taylor