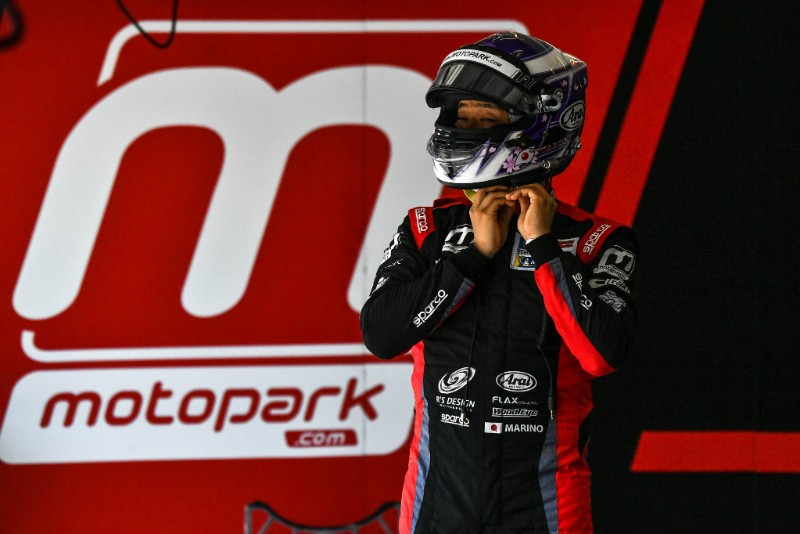 The Motopark driver’s best lap, set in the third and final session of the day, was 0.091 seconds faster than fellow Japanese driver and team-mate Yuki Tsunoda.

Tsunoda had set the pace in the second session of the day, but it was his session three time that put him in second place.

Both Tsunoda and Red Bull stablemate Liam Lawson missed the previous two EF Open rounds due to clashing FIA Formula 3 Championship commitments, and Lawson completed a top three lockout for Motopark nearly a third of a second back.

Jack Doohan was the top Double R Racing, and HWA-powered, car in fifth. He may have been behind Billy Monger had the Carlin driver not lost crucial track time by sitting out the second test session.

His team-mates Christian Hahn and Teppei Natori were just behind him, and all with a half-second of Sato.

A disappointed ninth was Teo Martin Motorsport’s Lukas Dunner, the only driver who can deny Sato the title. He was actually second fastest in session two, but his afternoon improvement wasn’t enough and he sank down the order.

Rookie title leader Linus Lundqvist rounded out the top 10 for Double R, with the Motopark pair of Cameron Das and Niklas Krutten behind him and all within a second of Sato.

There were no cars from CF Racing or RP Motorsport in the test, and it looks like Dunner is going a second weekend without a single team-mate due to the absence of Aldo Festante.