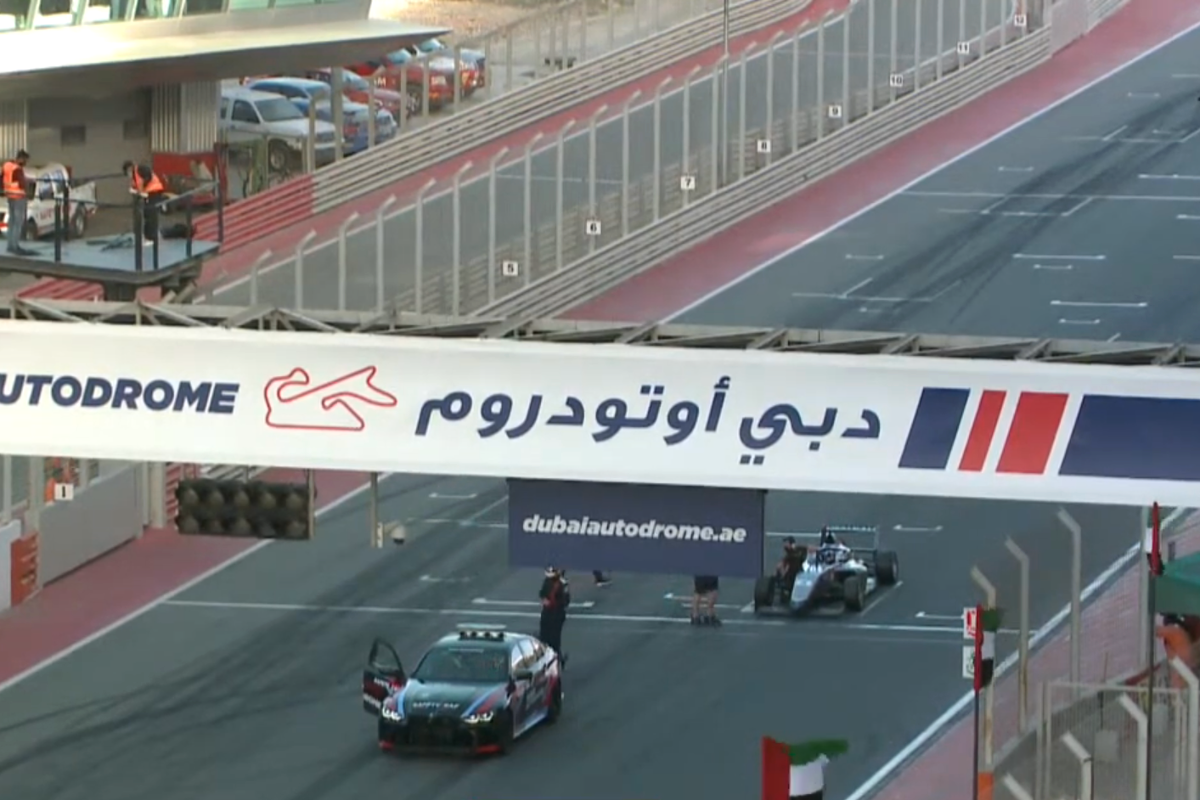 Hitech GP’s Alex Dunne was the one driver who finished not to be penalised in the final Formula 4 UAE race of the weekend at Dubai Autodrome, coming through to take his first win in cars.

The 25-minute partially reversed-grid race started with 3Y by R-ace GP’s Martinius Stenshorne romping into the lead from fourth on the grid at the start, but Dunne came through to lead the opening tour.

On the second lap, the red flag that caused all the confusion occurred as Anshul Gandhi, Vladislav Ryabov and Victoria Blokhina all tangled up. Gandhi was able to continue, but the other two cars blocked the circuit.

As it was a straight red flag, the cars should have returned to the grid, but only Dunne did so. Andrea Kimi Antonelli, running second, took to the pitlane and took the rest of the other 28 runners behind with him.

All, therefore, were summoned to the stewards for a breach of regulations under a red flag procedure except for Dunne, who was left on the grid on his own during the stoppage in a similar scenario to last year’s Hungarian Grand Prix.

The race resumed with 19 minutes of the 25 to go, and two laps were completed behind the safety car in order to allow all of the drivers to be in the correct positions. After the restart, all 28 drivers who entered the pits were awarded a five-second time penalty.

From the restart, Dunne initially was able to keep Antonelli at bay but with seven minutes to go the Mercedes junior got by.

He attempted to open up the five-second gap he needed but came up short by 1.3 seconds at the chequered flag. As Dunne was the only driver to finish not to be penalised, all of the order behind was unchanged.

Abu Dhabi Racing by Prema’s Aiden Neate came out on top of a brilliant battle to take the final podium spot and the lead in the championship, ahead of brief leader Stenshorne.

Tasanapol Inthraphuvasak took eighth ahead of Charlie Wurz and Ivan Domingues, who climbed up the order to round out the points.

Suleiman Zanfari started on pole but dropped down the order. His race ended slightly prematurely after last-lap contact with Christian Ho. Eleventh was therefore taken by Jamie Day, who also climbed a number of spots, and Valerio Rinicella – who started second on the grid.

Other retirements included Miron Pingasov, who stopped on circuit in a safe position, and Nandhavud Bhirombhakdi who failed to take the restart.