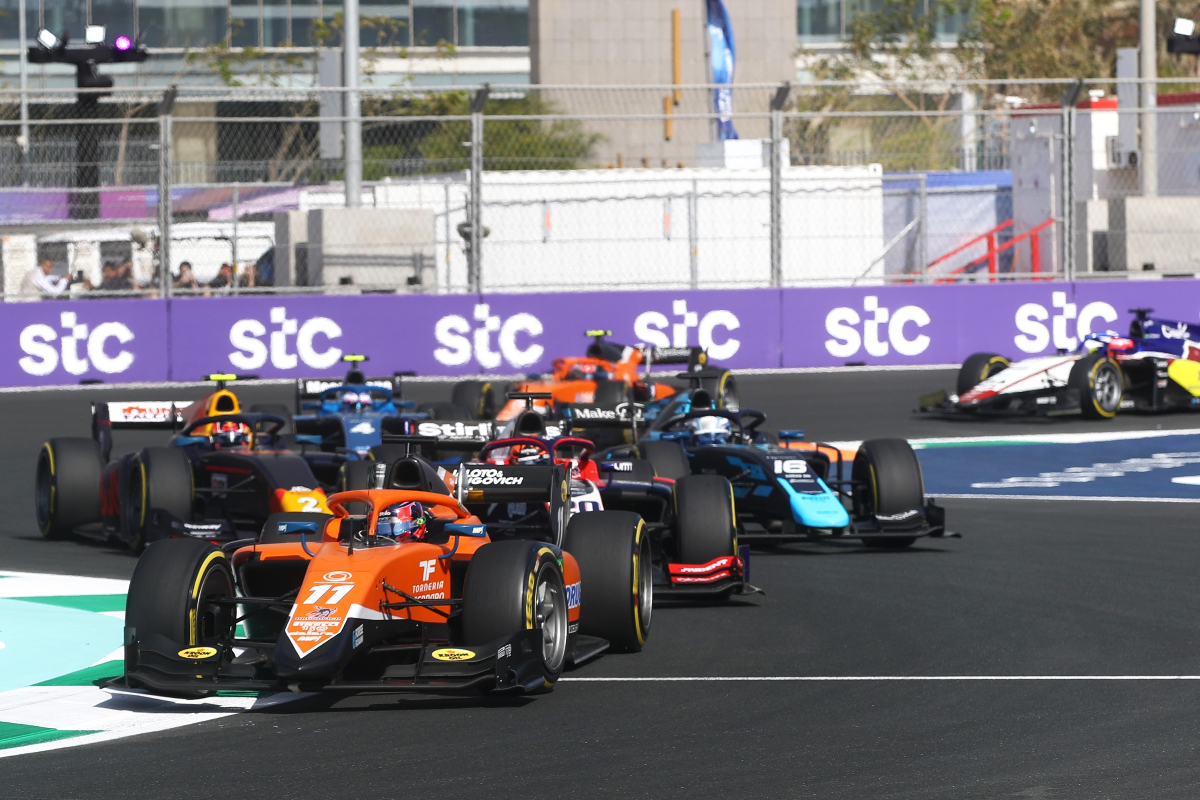 Felipe Drugovich has moved into the Formula 2 points lead with victory in the Jeddah feature race.

The MP Motorsport driver started from pole and secured his win over Trident’s Richard Verschoor as the pair pitted for soft compound tyres. Despite Verschoor closing in during the final three laps, Drugovich had enough of a gap to win.

It took two attempts for grid to get away cleanly at the start, with Drugovich cutting across Verschoor to defend the lead.

Liam Lawson overtook Ralph Boschung on the start, then did Marcus Armstrong on the next lap to rise to third. His fellow Red Bull juniors were rising up the order too, with Ayumu Iwasa and Juri Vips demoting Boschung to seventh.

Vips’ first attempted pass on Boschung was at the inside of turn one on lap five, and led to Boschung going into the run-off and staying ahead which earned him a five-second penalty.

Drugovich pitted from the lead on lap nine, while Verschoor went for the overcut. He exited his pitstop side-by-side with Drugovich, whose warmer tyres allowed him to move back ahead.

Lawson’s race came to an end at his pitstop as he was released without the front-left wheel properly attached and therefore had to retire, while Jake Hughes passed Iwasa to add further woe to Red Bull’s battles.

Theo Pourchaire and Jack Doohan, starting from the back of the grid due to issues in qualifying, made early progress with the pair both making up four positions on the first lap. While Doohan’s progress continued and he was able to run a longer first stint on the medium tyres, Pourchaire was forced out of the race with gearbox problems,

Doohan avoided a penalty like Boschung recieved as a battle with Clement Novalak led to him going into the run-off and passing Novalak off-track. He handed the position back, then successfully made the move at turn one a lap later.

Only towards the end did Doohan and Olli Caldwell eventually pit for soft tyres, attempting a four-lap dash to make their way through the field. Doohan took fastest lap, but he was far behind the fights up front as he finished ninth.

Behind the top two, Jehan Daruvala charged from 13th to third and Hughes ended up in fourth while Iwasa faded to seventh behind Dennis Hauger who was another later pitter and able to make up two places in the last few laps.

Hauger and Calan Williams both locked up as they left the pitlane following their stops, with the latter crossing the pit exit line with his mistake and ending up in battle with Novalak for 13th.

On the final lap Frederik Vesti spun out at the first corner, but was already not set to score.