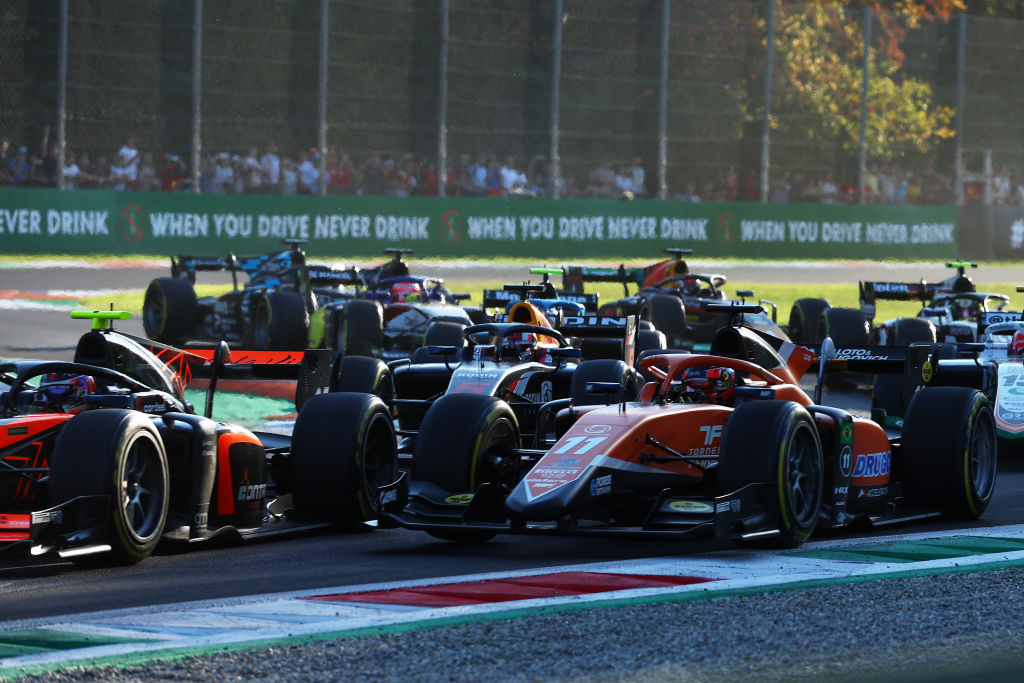 Felipe Drugovich has reflected on the accident that put him out of the Formula 2 sprint race at Monza, and meant he was crowned champion while on the pitwall.

On the opening lap Drugovich fought for 10th place with Van Amersfoort Racing’s Amaury Cordeel through the della Roggia chicane, and the inside line going into the corner became the outside line as they exited the chicane [pictured above].

Drugovich ran on to the exit kerbs straight away but was squeezed off-track further by Cordeel, whose rear-left wheel ran into Drugovich’s front-right and almost immediately broke the latter’s steering.

He managed to nurse his crabbing car back to the pitlane, where the team instructed him to retire it after examining the front end, and Drugovich ended up winning the F2 title while with his team on the pitwall as title rival Theo Pourchaire finished a penalised 17th.

“Well I had a good start. I wasn’t playing it completely unsafe, I was just trying to be safe,” Drugovich said of lap one, having started 12th on the reversed grid following a five-place grid penalty for failing to slow under yellow flags in qualifying.

“I thought he saw me there, probably didn’t. Or maybe he did and just ran wide. But I think at some point I put half a car out of the track just to avoid it, and then he just kept going out.

“The suspension was broken, and I was a little bit sad, but at the end I think it was a good way to celebrate, from the pitwall. We had to look at the good things [arising from that situation], and it was a different one.”

Drugovich said it was “such an unreal feeling” to become F2 champion, and that it took “a bit of time to sink in when you actually realise you’re the champion”.

“It was for sure not how I expected it [winning from the pits]. At the beginning I was a little bit nervous because Theo was making up some positions, but at the end we figured out it was quite difficult for him to go up and the feeling was the same as being in the car, it was just something unreal. I’m going to enjoy this for a long time.”