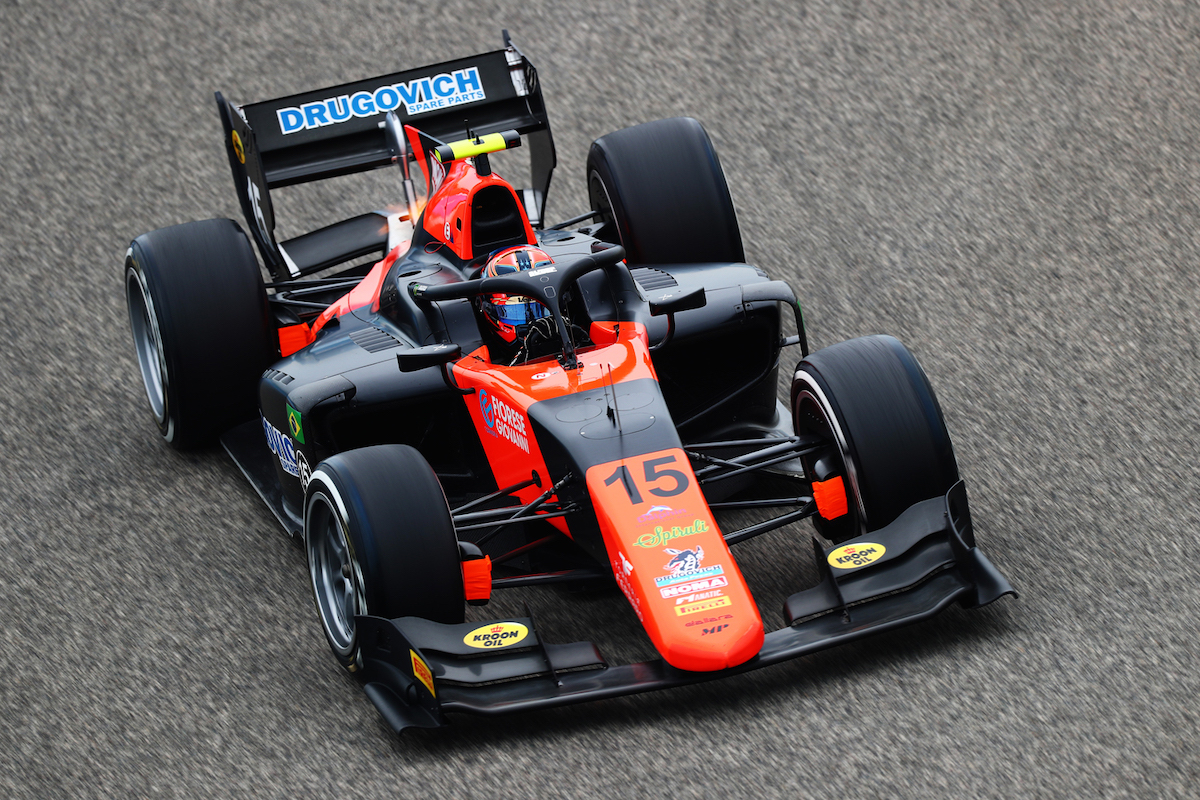 MP Motorsport’s Drugovich and Virtuosi Racing driver Ilott were the only two at the head of the field to start on the conventional medium-hard strategy, and the Brazilian got a better launch immediately to vault into the lead.

From there, the pair were joined by ART Grand Prix’s Marcus Armstrong and Prema driver Schumacher – who both performed the alternative strategy – with the latter making a brilliant start from 10th.

That was despite Schumacher making contact with Ilott’s team-mate Guanyu Zhou at Turn 5 on the opening lap – breaking the front wing of the latter. Schumacher escaped without damage. The incident effectively took Zhou out of title contention, although his chances were narrow anyway.

Ilott seemed happy enough to sit behind Drugovich in this phase of the 32-lap race, while Schumacher overhauled Armstrong after the latter locked up at least three times within a few corners as his harder tyres lost performance.

Making his pitstop before Drugovich, Ilott was then able to get past for the net lead.

When Schumacher pitted, he came out well behind the pair. At that point, Drugovich made his move back on Ilott for the lead by passing into Turn 1.

From there, he extended the gap and took victory by 14.8 seconds to take his third win of the season – the joint-most of anyone in 2020.

Carlin’s Jehan Daruvala took his first F2 podium finish with third, holding off Schumacher. Daruvala, who started eighth, also started on the conventional strategy, which proved to be the better option on the day. He was under pressure from the championship leader until the flag.

Daruvala’s team-mate Yuki Tsunoda was able to make the alternative strategy work well from last on the grid after his qualifying spin. He went as long as Schumacher on the hard tyre, and carved his way through the pack on the medium stint to recover to sixth. He will start the sprint race third and keeps his title hopes alive narrowly.

Just ahead of Tsunoda was Hitech GP’s Nikita Mazepin – another driver who just about remains in contention.

Armstrong ended up seventh after his mid-race struggles, just ahead of Prema’s Robert Shwartzman, who started down the order after qualifying struggles.

DAMS’ Dan Ticktum started third but had a miserable start, dropped down the order and discarded his hard tyres very early. He eventually finished ninth, just ahead of Campos’s Jack Aitken.