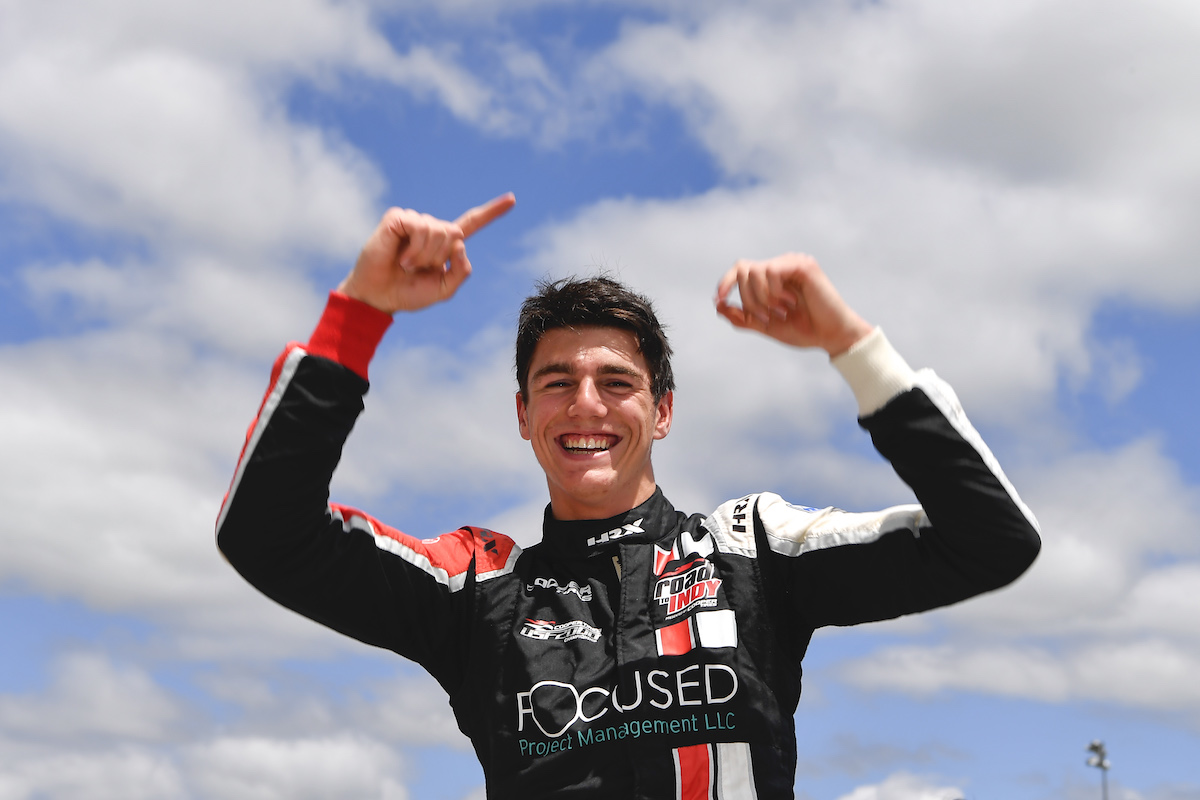 Michael d’Orlando has won the USF2000 title after a turn one incident derailed his title rivals Myles Rowe and Jace Denmark.

Pole-sitter Denmark was knocked out of the race on the opening lap while further contact behind for Myles Rowe dropped him down to 15th. Rowe spent the remainder of the race trying to recover from the incident, but could only finish fifth.

Denmark led the way heading into turn one, but Thomas Nepveu made contact with his left rear, spinning Denmark around. In avoidance, Nikita Johnson got into Rowe, taking the former out of the race, while a further incident behind between Jacob Douglas and Mac Clark also forced them out.

Billy Frazer and Lucas Mann were also involved in the incident. Frazer continued with a damaged rear wing while Mann pitted to retire.

The safety car was brought out as the three cars stuck at turn one were cleared.

Nepveu came out of the incident at the font of the order, with Nicky Hays and d’Orlando behind. Once racing was resumed, Nepveu was handed a drive through penalty for his part in the incident.

Hays caused little trouble for his team-mate and d’Orlando came though to take the race lead. With Christian Weir and Jagger Jones close behind, it was a four-car train at the front of the order, though the drivers seemed content to hold position for most of the race.

Meanwhile, Rowe was working his way forward. With fastest lap, he would need to finish second to secure the title. Spike Kohlbecker put up a good fight but a move at turn one allowed Rowe to come through to sixth. He quickly closed onto the back of Jorge Garciarce and soon found a way past. By this point he was four seconds behind the lead quartet, but with clean air he set the fastest lap of the race to close in.

D’Orlando broke away from the rest of the group as Weir and Jones battled for position, allowing Rowe to close the gap faster. When the chequered flag fell, he was just 0.4s behind Jones.

D’Orlando was 1.1s ahead at the front of the order, and with Rowe in fifth, even with the fastest lap, victory put d’Orlando six points ahead in the title fight.

Denmark returned to the track five laps down and attempted to set the fastest lap, but fell a few tenths of a second short. He finished P16 and takes third in the championship standings.