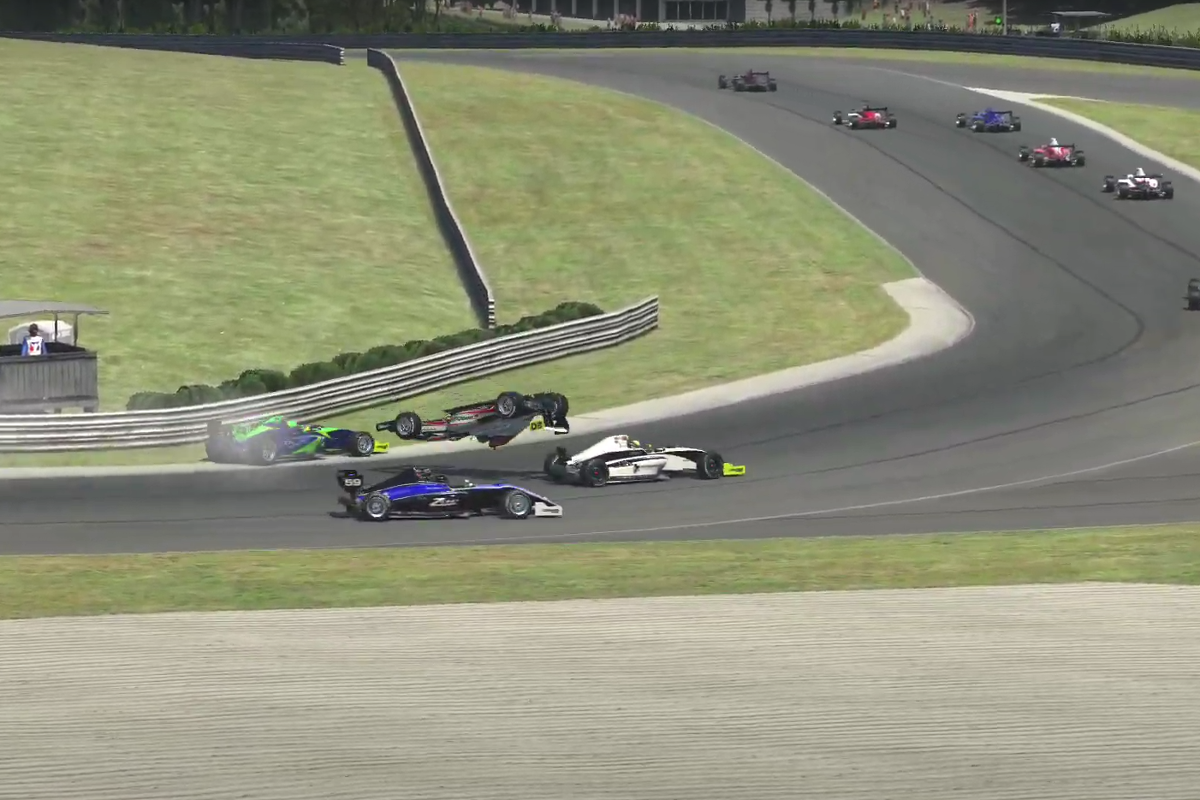 The iRacing-based Esports series uses the 2018-spec Indy Pro 2000 car, and de Tullio was fastest in it by a massive 0.41 seconds in qualifying over United States Formula 4 runner-up Mac Clark around the 1m17s lap. Only second to fifth places in qualifying were within a second of pole.

Over 16 laps in race one he opened up a gap of 10.8s to Lucas Mann, who ended up in second after Clark and Frank Mossman’s battle for the position came to an end towards the end of the race’s first half.

A lap six pass by Mossman demoted Clark down to fourth, and on the next lap an unforced error led to him then dropping to 10th as he ran over the kerbs at turns 12 and 13 and then half-spun and stopped his car at turn 14.

Mossman meanwhile was demoted to third by Mann, and couldn’t involve himself in the fight for second again as Noah Ping then started fighting him and they spent a lap going side-by-side with each other until Ping spun out of the final corner.

In the remaining laps, Mann strung out his own 10s advantage over Mossman, while Dean Dybdahl came fourth after a big slide by Jake Bonilla allowed him to get alongside and then take his position on the final lap.

Clark recovered to seventh, putting him fourth on the reversed grid for race two. Tyke Durst got to start from pole, ahead of Sam Corry and Konnor Gutting who had fought fiercely through race one.

Dybdahl exited proceedings pretty quickly by getting loose then being hit off at the opening corner, while de Tullio was flipped twice at turn five. These two incidents led to the pace car being summoned for the second lap, with Corry leading Clark, Gutting, Mann and Mossman.

The functionality of iRacing meant the damaged cars could reset to the pitlane for repairs, and the lap at slower speeds meant de Tullio was able to nullify the defecit he had at the back of the field.

The was more chaos at the restart as Mann and Gutting collided, while Clark spent several corners trying to pass Corry for the lead. Once he succeeded in doing so he was the fastest car on track, and pulled away to take an 11.2s win.

Corry’s second place was hunted down by Jimmie Lockhart after he passed Elliot Cox, and he became Clark’s closest rival after going wheel-to-wheel with Corry into turn one on lap 11. That didn’t give him enough time to chase down the leader, but it didn’t matter as de Tullio was charging up the order.

After exiting the pits early on he set fastest lap in 11th place, gained two spots from spinners and another from a drive-through penalty for Ping, and charged past several more cars to take second with two laps to go.