Dillmann, Bacheta to test for Russian Time at Barcelona, Daly with Hilmer 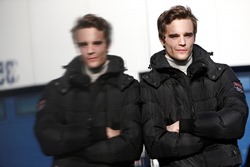 Dillmann set the pace with another new team, Hilmer Motorsport, at the opening test at Jerez last week. He has a connection to the Russian Time team (who were announced on Monday morning as replacements for iSport) through its manager Timo Rumpfkeil, whom the French driver has previously worked with at Rumpfkeil’s F3 team Motopark.

Bacheta will be one of two GP2 debutants in the field, along with Conor Daly who will replace Dillmann at Hilmer. It had looked as though the American would continue in GP3 this year with ART Grand Prix after testing for the French team a fortnight ago but he will now line-up alongside Pal Varhaug at the test.

Elsewhere, Rodolfo Gonzalez has replaced Nathanael Berthon at Trident, with Formula Renault 3.5 champion Robin Frijns continuing in the second car. The other two unconfirmed seats at Caterham and Lazarus will again be occupied by Sergio Canamasas and Kevin Giovesi respectively.