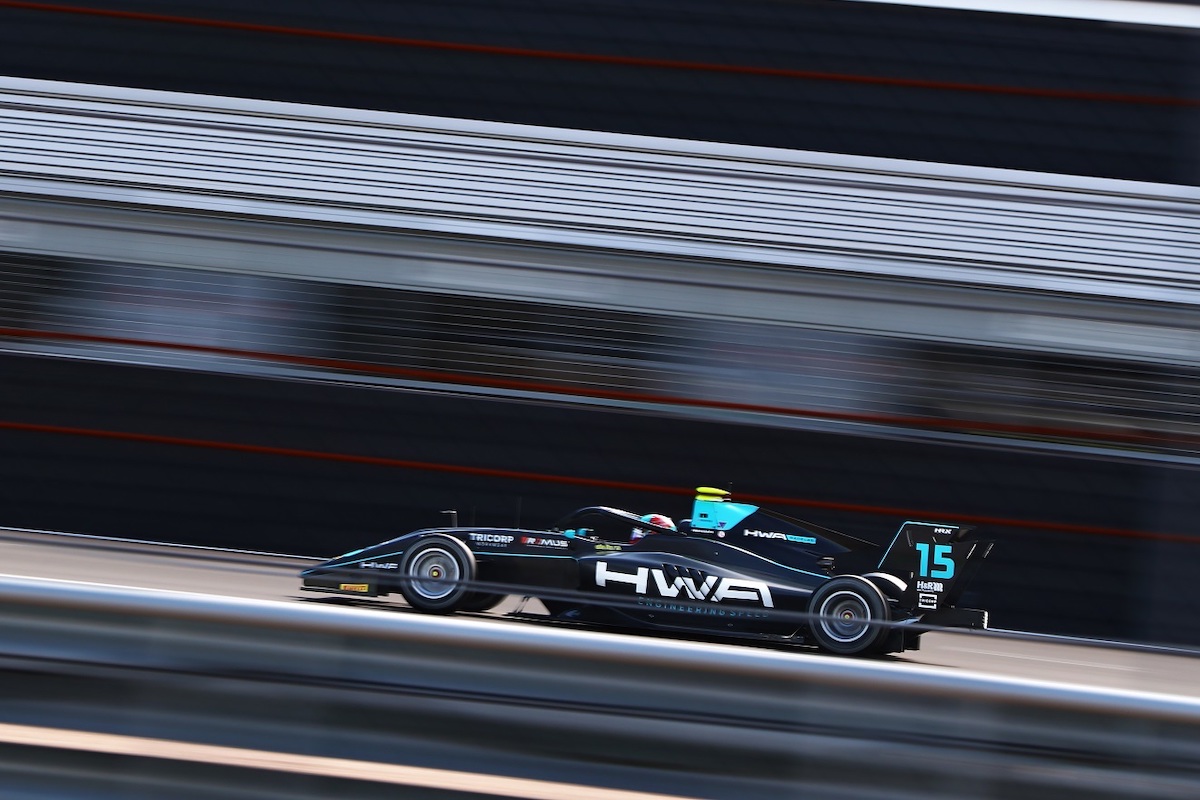 HWA driver Jake Hughes believes that a different way of thinking around the car’s setup is behind the improvements shown by the team so far in the second Silverstone round.

Third on the grid for Hughes for Saturday’s race is the best qualifying result for the team so far in 2020, with team-mates Jack Doohan and Enzo Fittipaldi also showing improved pace throughout practice and qualifying.

HWA had previously struggled so far in its second season running an F3 squad, with fourth for Hughes at last weekend’s first Silverstone race the only result the team has had in the top eight.

Experienced F3 racer Hughes had qualified seventh for that race, but will line up just behind front-row starters Logan Sargeant and Liam Lawson on Saturday. Rookies Doohan and Fittipaldi also achieved their season-bests in seventh and 13th respectively.

“We did change the car quite a lot [between races],” Hughes said in the post-qualifying press conference.

“Obviously I don’t want to say how, but it’s a different philosophy let’s say and it seems to work here. It’s not to get complacent and say that this will work from now on, but it looks like it has so far. If we can start more like this, then the second half of the year should be quite interesting.

“We seemed to struggle more at Silverstone in one-lap terms compared to the other circuits in the dry, so obviously without saying too much you can read between the lines as to where we felt like we needed to gain and looking at the sector times we seem to have done that.

“It’s our first time changing the car like this, so there’s some fine-tuning to do to try to perfect it even more. But I’m happy for the guys, they worked very hard in between these two weekends.

“In this championship, if you’re starting near the front it helps your tyre wear quite a lot. The dirty air is really punishing with these tyres, so I think we’ve made life more difficult for us than we would have liked so far this year. I think our race pace, in general, has been better than our one-lap pace, so starting on row two it should be a bit better for us.”

Hughes pointed out that having the same circuit and tyre compounds as last weekend prompted the team to try something fresh with the car.

“I think it’s the first time in the championship’s history where we have had back-to-back tracks with the same tyre compound, so it was an opportunity to learn. I think we did that; we had a much stronger car already from free practice today,” he said.

“I’m not sure where everybody else was on track during the red flag but we were a bit unfortunate where we got a red flag literally in Turn 18. So we had already done the push lap already, but it didn’t get counted. I don’t know how that affected for us for what ended up being out-push for everybody but nevertheless the car balance felt good. I don’t think we could have challenged Logan for pole today but compared to where we’ve been it’s a big improvement.”