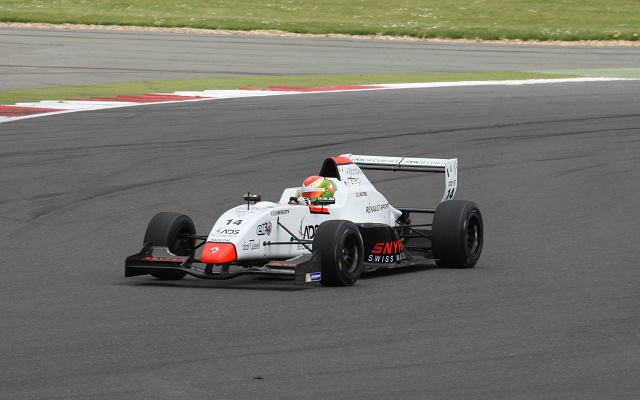 After narrowly leading practice one, the Swiss driver dominated the second session and will go into qualifying on top form.

MP’s Dennis Olsen and MGR’s Colin Noble were among the early leaders in the first session, but the battle for the top stabilized when Deletraz took the lead.

The Swiss driver had to improve several times to retain the benchmark, but managed to beat Harrison Scott by a tenth at the checkered flag.

Callan O’Keeffe was the only Fortec driver in the top ten in fifth, while Darius Oskoui took the leading Rookie class honours in second.

Deletraz and Jorg led the running early on in session two, before local driver Alex Gill stormed to the top with 20 minutes to go.

He was then deposed by new teammate Charlie Eastwood, before Deletraz vaulted back to the top.

The times ramped up massively at that stage and Deletraz ended up more than five tenths clear of second-placed Defourny.

Sasahara was third, ahead of Chaves and Oskoui, who made it three ART cars in the top five.

Zaruba was classified sixth, having brought out a session-ending red flag with a minute to go. Jorg ended up seventh, ahead of O’Keeffe, Olsen and Eastwood.

“Our form here’s really positive, I think”, Deletraz said after practice. “We’re running like at Monza and I hope we can get double pole again. I think we have a bit of a margin.”

“The goal here is to take the championship lead, but Ukyo’s at Silverstone and will be hard to beat. Points lead is the goal but we also have to think about the future, because we need to win the championship.”