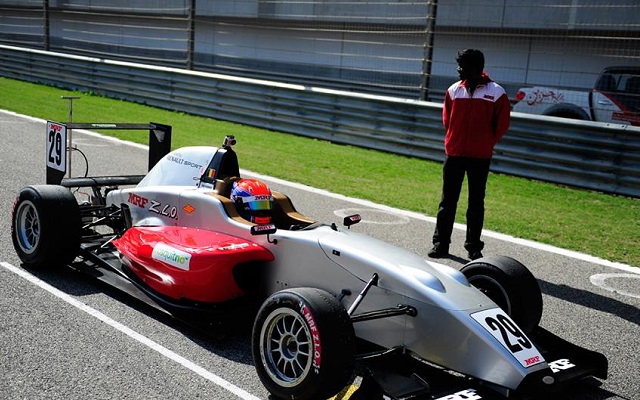 The final race of the 2013-14 MRF Challenge season at Madras has not yielded a definitive series champion as the outcome of the title battle between Rupert Svendsen-Cook and Tio Ellinas will now come down to the result of the Briton’s appeal.

The duo went into the reverse-grid finale level on points, lining up in fourth and fifth respectively. Expectedly, that made for a very close title showdown, as Svendsen-Cook and Ellinas spent most of the race close by. After 15 laps, which included a safety car period, the British driver crossed the line in second, leading his championship rival by five seconds and seemingly sealing the title.

However, the fight for the series crown would instead continued off-track as Ellinas lodged a protest against Svendsen-Cook, stating that the Brit rejoined the track in an unsafe manner on the opening lap and forced the Cypriot off. After a lengthy period of review, the stewards announced that Svendsen-Cook would receive a post-race penalty, which would drop him down to P12 and give the championship to Ellinas.

Shortly thereafter, Svendsen-Cook confirmed that he would be appealing the decision, stating on his personal Twitter: “I did my job and won the championship fair on track… I hope a fair outcome with racing/sporting sense prevails in the hearing”. The date and the procedure of the appeal is yet to be disclosed, leaving the name of the series champion shrouded in uncertainty.

Meanwhile, amidst all the title drama, it was Sam Dejonghe who took the checkered flag first, picking up his second victory in the series. Reverse-grid polesitter Ben Anderson managed to keep the lead off the start, but soon picked up his second jump start drive-through of the weekend, allowing the Belgian to soon take over in the lead.

Kimiya Sato to race for Campos in GP2