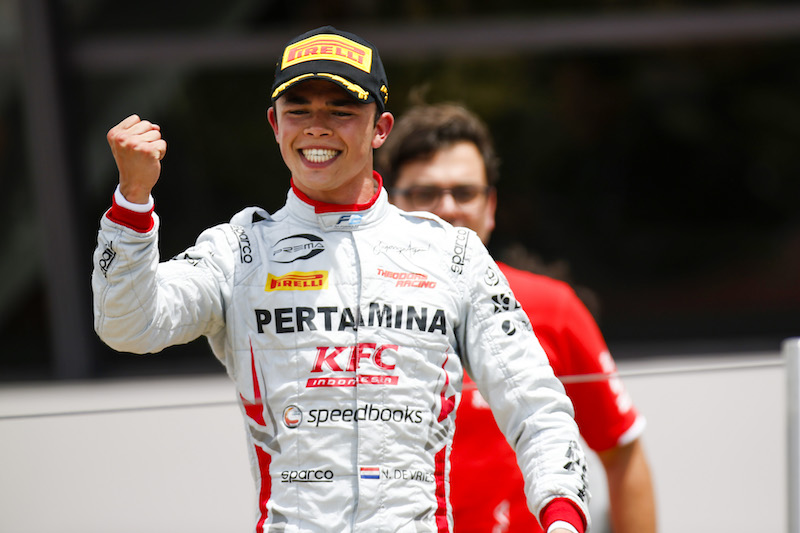 De Vries moved up to second from his third place starting position on lap 6 of 21 by passing polesitter Nicolas Latifi, with the DAMS’ driver previously being overtaken by Charouz Racing System’s?Louis Deletraz.

Over the next seven laps De Vries ate into Deletraz’s lead, taking the lead on lap 13 and disappearing up the road to take his first race win of the 2018 season.

Deletraz had to defend during the final laps from Luca Ghiotto, but he held off the Campos driver to take his second podium finish in two sprint races while Ghiotto repeated his result from Saturday.

Championship leader Lando Norris had moved up to seventh and behind his Carlin team-mate Sergio Sette Camara during the opening half of the race.

Norris caught up to Sette Camara, who was trying to find a way past Antonio Fuoco, and was able to overtake his team-mate on lap 16 after driving side by side exiting the Turn 8/9 chicane.

He then fell into a battle with Latifi for fifth, and on the final lap of the race Latifi locked up massively going into the first turn, also damaging his front wing on Norris’ car.

Norris finished behind Fuoco in fifth but leaves Paul Ricard further in the lead of the championship, with ART’s George Russell being taken off the grid with a car issue and Russian Time’s Artem Markelov stalling when the race started.

Latifi dropped behind Sette Camara and his team-mate Alexander Albon on the final lap, but was able to nurse his car home and finish in eighth place.

Santino Ferrucci finished the race in ninth place, while Campos’ Roy Nissany rounded off the top 10 even after being given a five-second time penalty for gaining an advantage during an earlier battle on track.