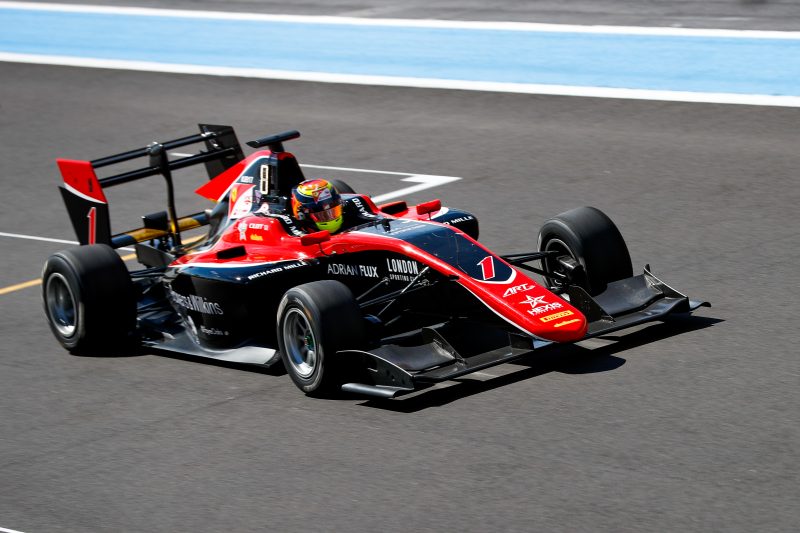 Ilott briefly lost the lead at the start as Trident’s Pedro Piquet vaulted from third to first through Turns 1 and 2, jumping both Ilott and front row starter Joey Mawson.

ART Grand Prix’s Ilott seized the lead by diving to the inside of Piquet at the high-speed Turn 11, edging ahead by the exit of the corner.

Rookie Ilott then built a comfortable advantage over Piquet, to claim his maiden GP3 win by 3.4 seconds after 15 laps. In second place, Piquet scored his first podium in the series, as did Arden International’s Mawson in third.

Mawson suffered a slow start from second on the grid. He initially slipped to fourth place by Turn 1, dropping behind Alessio Lorandi. Fighting back in Turn 2, Mawson ended up in the run-off area before regaining third place by Turn 3.

Trident’s Lorandi faced significant pressure in the closing stages of the race from ART’s Nikita Mazepin. After starting seventh, Mazepin gained a place at the start and passed Giuliano Alesi for fifth with a sweeping overtake at Turn 3.

Lorandi held on to finish fourth, with Mazepin in fifth and Alesi less than 0.4s behind in sixth.

Hughes damaged his front wing clipping Hubert’s left-rear wheel when entering Turn 1. Hubert avoided a puncture, but Hughes had to pit for a new front wing and ended up last of the finishers.

Campos’s Leonardo Pulcini finished in eighth place, ahead of? Trident’s Ryan Tveter and Jenzer Motorsport’s David Beckmann who rounded out the top 10.

After being disqualified from victory in Saturday’s race, Dorian Boccolacci started at the back of the field and finished 14th. He had a race-long duel with team-mate Christian Lundgaard.

Renault academy driver Lundgaard, making his GP3 debut this weekend as a stand-in for Will Palmer at MP Motorsport, finished ahead of Boccolacci in 13th.

Their team-mate Niko Kari was also disqualified from Saturday’s race. He picked up a puncture after running over Hughes’s front wing debris on the pit straight and retired from the race.