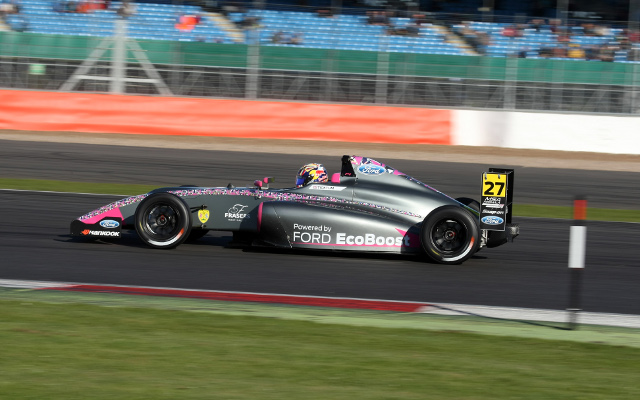 British single-seater rookie Dan Ticktum will be unable to race again until late 2016 after receiving a ban for an incident at the Silverstone MSA Formula round in September.

After first-lap contact from Ricky Collard had dropped him to the rear of the field in the third and final race of the penultimate event of the season, Ticktum overtook numerous other cars under safety car conditions to catch up to his rival and crash into him, leading to both cars retiring.

Stewards excluded Ticktum from the meeting, triggering a three-month licence suspension after he was given a similar punishment at Croft earlier in the year.

As reported by Autosport, the Motor Sports Council National Court has since reviewed the incident and handed him a two-year ban, with the second year suspended pending any further offences.

The ban is effective from 27 September 2015, the date of the incident, ruling him out of competition until the same time next year.

In a statement to Autosport in the aftermath of the incident, 16-year-old Ticktum said: ?Not only have I let myself down but more importantly I have let down so many people that are close to me too.

?I want to apologise to my fellow drivers and all those people who have supported me in the motor racing community.

?I also want to apologise to all the marshals and MSA officials at Silverstone this weekend.

“I have been a fool and I intend to learn the important lessons I need to from this weekend.?

Fortec driver Ticktum had provisionally secured the rookie title for car racing newcomers earlier in the Silverstone weekend but the exclusion combined with his enforced absence from the final round at Brands Hatch meant he lost the crown to Enaam Ahmed, and dropped to sixth in the final standings having previously been a title contender.

Ticktum ? who has carried some Red Bull sponsorship but has not been a member of its Junior Team ? had also started racing in Formula Renault 2.0 in Europe with Koiranen with a view to 2016, but his suspension cut that programme short. His ban will not prevent him from testing.