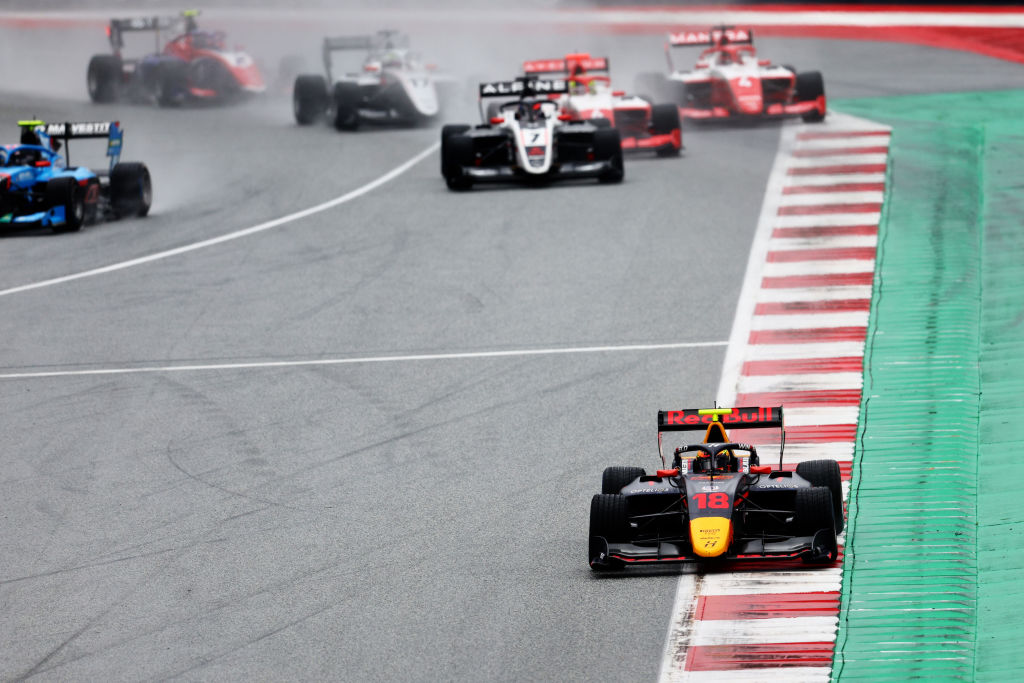 It’s good time to speak French in FIA F3, as Arthur Leclerc, Victor Martins and Isack Hadjar have been the benchmark drivers through the first half of the 2022 season. Who else is on their level this year?

Following up Formula Scout’s mid-season analysis of Formula 2, it’s time to look into the competitive order in the supporting FIA Formula 3 Championship. There’s been 10 races so far, with eight more to go, and unlike in F2 there are no pitstops in races so there is far less strategic variation. It adds a little more certainty to determining the precision of race data in forming pictures of each driver’s competitivity, but qualifying data is the trickier one to handle as with 30 cars on track there is far more traffic, far more dirty air and also far more disruption in qualifying sessions. As a result of that, it’s not unusual to see drivers set their fastest lap of the weekend during the single free practice session.

Wet weather on Friday meant it was actually in the races where the fastest laps of the Imola round were set, and put Trident’s Roman Stanek on top rather than his pole-claiming team-mate Zane Maloney. At Barcelona the overall fastest lap was set by ART Grand Prix’s Victor Martins rather than poleman Stanek, and the same went for Silverstone where it was MP Motorsport’s Kush Maini who could claim to have been the fastest driver of the weekend despite qualifying 10th, a third of a second off the pace of Carlin’s Zak O’Sullivan.

So a driver’s average qualifying position will probably dictate how many points they will score over a season, with overtaking proving difficult in the Dallara F319 and particularly in DRS trains on crowded tracks, but probably is not a great indicator of their absolute pace. Although with the difficulty FIA F3’s Pirelli tyres pose to drivers to get the best out of them over a lap, it is a tad surprising that on a more rubbered-in track there is still rarely an improvement in pace between practice and qualifying.

The Ferrari junior has an average starting position of ninth for feature races this year, but only once has he finished outside the top four in those races – a 16th place at Barcelona following a messy run in which he earned a penalty – and he has consistently been one of the fastest drivers on one-lap pace.

After qualifying fourth for most recent round at the Red Bull Ring, the fourth time he has qualified in the top five in 12 attempts since debuting in F3 with Prema last year, he said: “Not really happy about qualifying in terms of results, but on the other hand, I’m really, really happy about the pace because we definitely had the pace to fight for pole.”

On this occassion he thought what cost him pole was the red flag that had shortened the session, and had denied many drivers the opportunity to have a second run they could improve their laptime on.

All three Prema drivers are in the top eight for single-lap pace over the first half of the season, but qualifying has not been easy for any of them. Rookie Ollie Bearman’s average starting position on Sundays is sixth, and Jak Crawford’s is 9.4. That makes Bearman on average the fifth best qualifier, with Stanek the top driver with an average qualifying position of 3.8 (but an average feature race finishing position outside of the points-paying top 10 places), and one of only eight who has a top-10 average. The non-Premas in that list are of course Stanek, then Martins, Hadjar, Maloney and MP Motorsport’s Caio Collet.

This year marks the first time the championship has had feature and sprint races since its predecessor series GP3 in 2018, and so more points have been on offer in the longer Sunday race than Saturday’s fixtures.

Martins has been getting the most out of the longer races, scoring 77 of his 98 points, while Hadjar – who sits one point behind Martins at the top of the standings – has scored nine less in the feature races but eight more in the sprints.

Crawford matches Hadjar’s haul of 29 points from the sprints, with Leclerc next best on 24 points and then Martins, Stanek and Collet on 21. Beyond them, Franco Colapinto (Van Amersfoort Racing), Alexander Smolyar (MP) and Kaylen Frederick (Hitech) have all scored 18 points, which contributes to more than half of Frederick’s total tally. 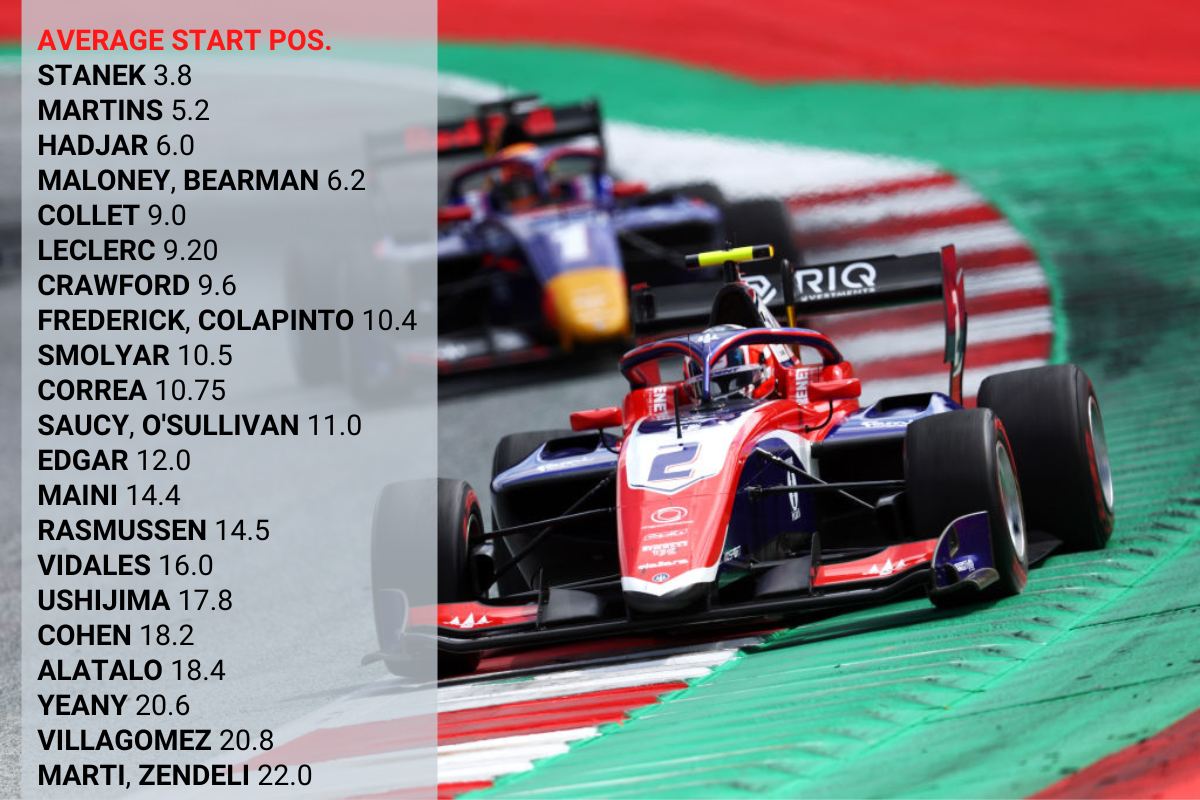 The gaps in the feature race scores are far larger, and is where the title will likely be won. That’s not just a statement based on the maths, but also several top drivers making dismissive remarks about the value of the sprint races after they’ve qualified a few rows down the grid.

Leclerc is the third highest feature race scorer on 67, then it’s Bearman on 48, Stanek on 46 and Crawford on 41. That Hadjar and Bearman are not only quick but also converting their pace into race results (although Bearman has only scored 11 points in the sprints) shows quick adaptation from the two rookies and makes them title contenders for next year, if not this one.

Colapinto is one of the other standout rookies, having taken pole on his and VAR’s debut at Bahrain but then didn’t qualify in the top 10 again until the Red Bull Ring. That means his average starting spot has been 10.4, which is low but still the ninth best in the field, and on average he has been the sixth fastest driver on raw pace. But being mired with midfield starting spots usually though means his race pace has been dictated by traffic as much as qualifying form can be.

The Red Bull Ring, possibly the worst circuit of them all for traffic given it’s length (although Zandvoort does come up later in the calendar), showed how little deviation there can be in pace potential when almost everyone is running in a DRS train.

In the feature race it was winner Hadjar who unsurprisingly had the fastest race pace with an average of 1m32.672s, with Smolyar on average a tenth of a second slower.

Then six drivers were split by just 0.072s per lap on average, which included all three of Prema’s cars, Martins, Jonny Edgar and Frederick.

Trident driver Edgar has looked particularly quick since returning from illness, and certainly if he hadn’t missed the Imola and Barcelona rounds it’s conceivable he would be up with team-mate Stanek – currently fifth in the points – or even above him.