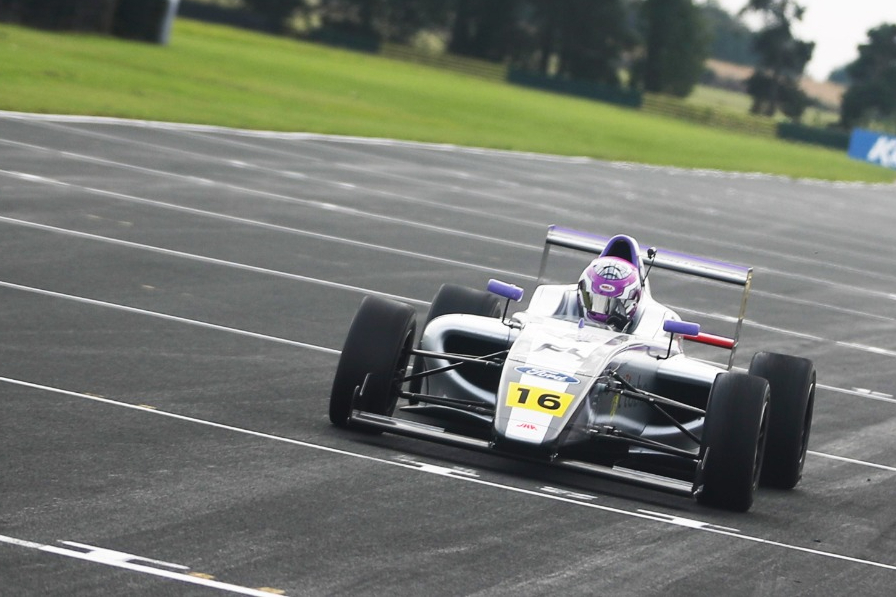 JHR Developments’ McKenzy Cresswell took his second British Formula 4 victory of the weekend in race three at Croft, as the championship lead changed hands once again.

After Saturday evening’s race, points leader Matthew Rees was judged to have jumped the start, dropping him from ninth to 13th and reducing his points lead to just three over Matias Zagazeta.

Sunday’s sole 20-minute race started with Cresswell fighting Zagazeta off the line, and the poleman kept ahead at the start long enough to start to open up a gap to the Argenti Motorsport driver.

There was drama on the opening lap as Argenti team-mates Marcos Flack and Eduardo Coseteng made contact after the latter locked up, sending the former into the air briefly. Both went on to retire.

The race was able to continue without interruption, and the main battle towards the front involved JHR’s Joseph Loake under consistent pressure from behind while holding third.

Argenti’s Aiden Neate got by to make it onto the podium, and he then started to close in on Zagazeta in front.

Fortec Motorsports’ Joel Granfors and JHR’s Rees, as well as Carlin’s Tasanapol Inthraphuvasak, all got by Loake as the race approached its conclusion.

Cresswell was able to control the pace out front, while Zagazeta took the points lead away from Rees after going side-by-side with Neate on the final tour.

The big mover of the race was David Morales. Starting 16th, he gained two spots from the collision on the opening lap but otherwise was able to carve his way through the pack into eighth.

Fortec’s Oliver Gray and Carlin’s Kai Askey rounded out the top 10 – the latter picking up a black-and-white flag for track limits and having dropped back slightly down the order late in the race.

Arden’s Zak Taylor was just outside of the points in 11th after light contact with Gray that allowed Askey to get both on the road.

Carlin’s James Hedley rounded out a difficult weekend with 12th, ahead of race two winner Dougie Bolger and series returnee Georgi Dimitrov, but he has now dropped to fifth in the standings having previously been points leader.