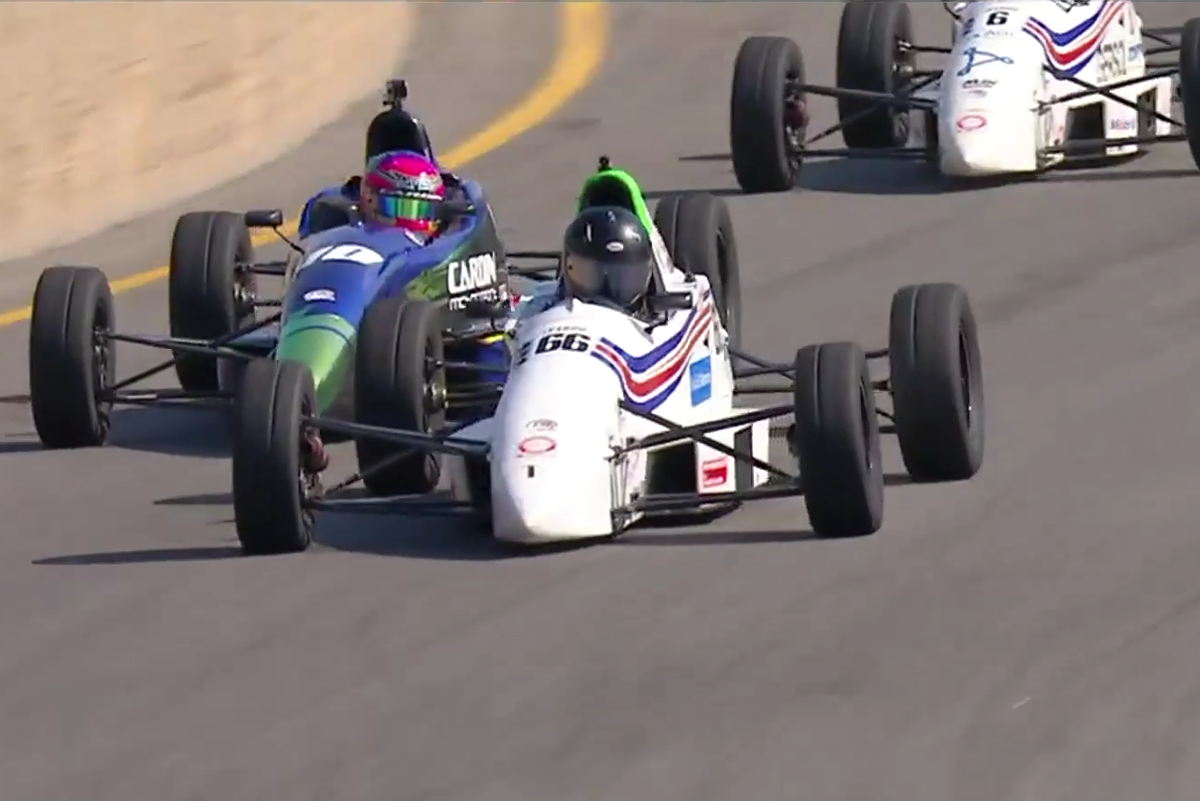 Cowden passed Cardin at turn two in race one, but Cardin locked up and reclaimed the lead. Didier Schraenen demoted Cowden at turn four on lap two, and it took three laps for him to return to second.

Connor Clubine got by Schraenen a few corners later, and as he pressured Cowden the leader ran away. That gap was eliminated when Jacob Moreau’s pass on Schraenen at turn six failed, locking up and crashing, then Mike Franza slammed into turn seven;s outside wall, ripping off his left wheels and his car’s rear axle.

After six pace car laps, Cardin lost out to Cowden into turn one and Clubine at turn nine on the restart. He regained second at turn 10 on the next lap and hunted Cowden down, eyeing a pass starting the final lap when a caution was called as Duncan Murdoch was spun into barriers, ensuring Cowden victory.

A move on Schraenen by Sam Baker for fourth cost both places, but Schraenen recovered to sixth while Baker retired.

The fastest race laps set race two’s grid, putting Cardin on pole. Baker started strongly to rise to third, then at turn six locked up for so long that his pass on Cowden ended up being a move on Cardin too.

Cardin got the lead back at turn eight as Baker locked two wheels, Cowden claimed second on lap three and Clubine took third from a locked-up Baker on lap four.

Britain West Motorsport team-mates Cowden and Clubine hunted down Cardin, and both passed him on lap eight. Cardin stopped moments after that, and told Formula Scout an electrical issue shut his car down.

Callum Baxter inherited third to form a Britain West 1-2-3, and Jacob Moreau passed Baker for fourth before spinning at turn eight. That prompted Baker to spin too, allowing Schraenen to pass both.

Cowden and Clubine ran nose-to-tail for 17 laps but not once did Clubine attempt passing and finished second. Baxter was 15 seconds back in third, and Baker tracked down Schraenen to regain fourth.

Clubine had pole for race three, which had warm-up lap drama as Mario Dufuor’s nose cone came off. On lap one Clubine struck it, but it didn’t slow him and he hit it again on lap five.

He led until lap seven, having what looked like a wall tap at turn three then being passed by Cowden and Cardin at turn six.

The top four ran in formation, and later Moreau hit turn one’s barriers and caused a caution period before driving away.

There was then another caution as Murdoch spun into the barriers exiting turn eight. On the last-lap restart, Cowden overtook at turn eight to win.

The Alpine Academy has a winning vision, but lost its drivers